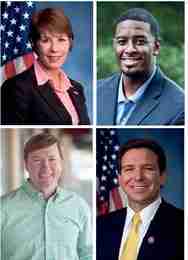 On the Democratic side, former U.S. Rep. Gwen Graham has received $1.1 million, while Tallahassee Mayor Andrew Gillum got a check Friday for about $436,000. On the Republican side, Agriculture Commissioner Adam Putnam has received $1 million and U.S. Rep. Ron DeSantis has gotten about $886,000 even though some GOP leaders have called the program “welfare for politicians.”

So far the state Division of Elections has distributed $4.5 million, with most of it going to gubernatorial candidates. Democratic attorney general candidate Ryan Torrens received $89,000 Friday.

Any candidate for state office can qualify. The amount each receives is based on how much money they raise from Florida residents.

Next post The latest on the Omarosa drama: ‘I will not be silenced’