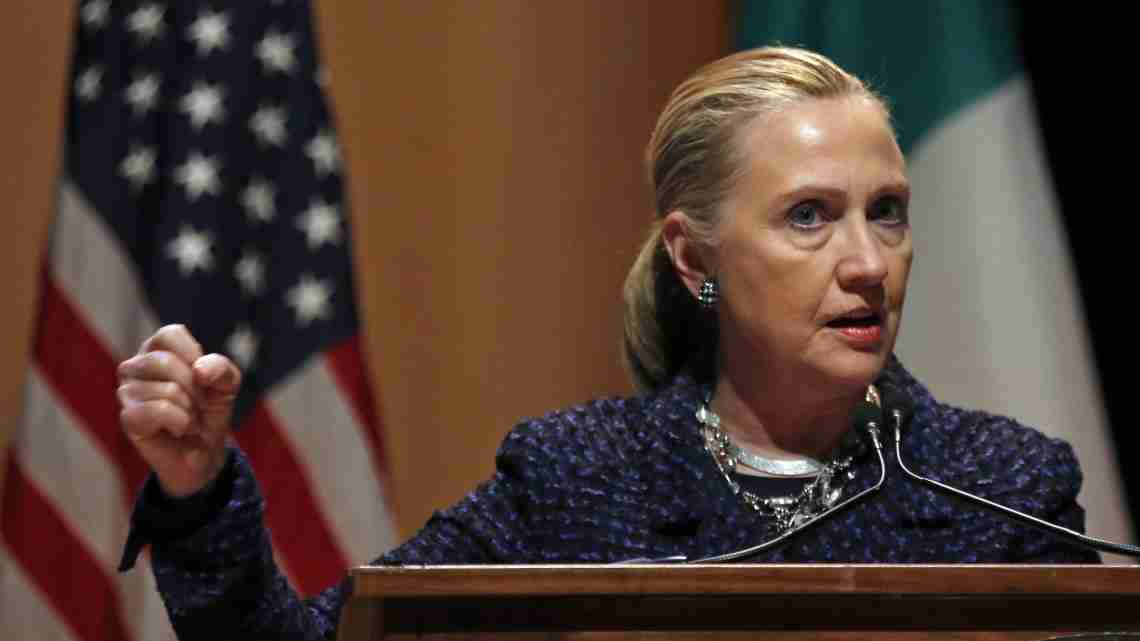 By BILL BARROW
South Carolina (AP) -Hillary Rodham Clinton soaked in standing ovations and weathered protesters over a day of campaigning intended to solidify her advantages in the African-American community and highlight criminal justice and economic policies that she says will treat blacks more fairly.

The Democratic presidential favorite watched silently Friday evening at an NAACP banquet in South Carolina as family members of “The Emanuel 9” took part in a memorial for nine people slain in June by a white gunman during a Bible study a historic black church in Charleston.

“People in this room … have shown grace and resilience,” Clinton said later, during remarks that drew multiple rounds of applause. She added that the city has inspired Americans she said often “don’t know what to do about that kind of hate and violence stalking our land.”

Clinton framed the Emanuel slayings and the April killing of Walter Scott, a black man shot by a North Charleston police officer who has since been fired and charged with murder, as part of a trend. “The last few years have shone a bright light on the systemic effects of racism and injustice,” she said.

The answers, she said, include overhauling the U.S. criminal justice system, tightening gun regulations and expanding economic and educational opportunities in communities held back by generations of institutionalized racism.

They sang and chanted for nearly 12 minutes several feet from the podium as Clinton tried to shout over them. Rep. John Lewis, a hero in the civil rights movement, urged them to stop, as did the musician Usher.

The group _ fewer than 10 _ eventually left the college gymnasium only after the crowd of more than 2,000, most of them young African-Americans, chanted, “Let her talk!”

“I’m sorry they didn’t listen, because some of what they demanded I am offering and intend to fight for as president,” Clinton said. “We have to come together as a nation,” she added.

The Georgia-South Carolina campaign swing, which Clinton will continue Saturday in Charleston, is part of her increasing emphasis on Southern states that dominate the early weeks of the nominating contest.

South Carolina holds its Democratic primary Feb. 27, after Iowa and New Hampshire begin the process a few weeks earlier. Georgia is one of almost a dozen states from Virginia to Texas that follow in March. African-Americans could make up a majority of the Democratic electorate, or close to it, in several of those states, a potential boon for Clinton, given that her closest rival, Vermont Sen. Bernie Sanders, has struggled to attract support from black voters.

Clinton, Sanders and former Maryland Gov. Martin O’Malley each have pitched criminal justice overhauls as they court African-Americans. The issue resonates among both traditional civil rights organizations like the NAACP and the younger activists of Black Lives Matter, though that movement’s leaders say they aren’t interested in participating in conventional politics by endorsing Clinton or anyone else.

Clinton called Friday for eliminating sentencing disparities between crack cocaine crimes and those that involve powder cocaine. The changes would build on a 2010 act of Congress that narrowed the disparity between crack crimes _ which are concentrated among minorities _ and powder crimes, which are more likely to involve whites. Clinton’s plan would make the change retroactive.

She proposed a legal ban on racial profiling by police. The policy would forbid federal, state and local officers from “relying on a person’s race when conducting routine or spontaneous investigatory activities,” unless they have information linking a suspect to a crime. Clinton hasn’t detailed how her idea would go beyond existing law, but her campaign cited previous congressional proposals that would make it easier for alleged profiling victims to recover damages from government agencies in civil court.

Clinton also embraced the movement to “ban the box,” or prevent the federal government and contractors from asking about criminal history during initial job applications. Studies have shown that employers are reluctant to consider applicants with a criminal history, but job prospects improve for former felons if hiring managers hear about their qualifications before their criminal records.

“I believe in second chances,” she said in South Carolina.