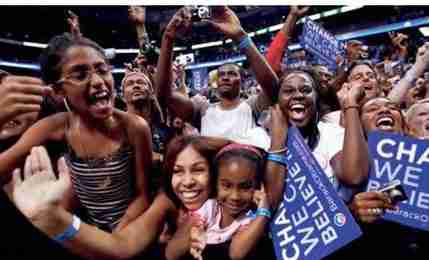 WASHINGTON – Among the youngest white adult Americans, feelings of racial and economic vulnerability appear to be closely connected to their support for Donald Trump in last month’s election.

That’s according to an analysis of a new GenForward poll of Americans between the ages of 18 and 30. Other surveys of white adults of all ages have found a similar pattern. Among young people from all racial and ethnic backgrounds, feelings toward President Barack Obama and about the way the government is working were related to support for Trump’s Democratic opponent, Hillary Clinton.

The pre-election survey data comes from a GenForward poll conducted by the Black Youth Project at the University of Chicago with the Associated Press-NORC Center for Public Affairs Research.

The survey is designed to highlight how race and ethnicity shape the opinions of a new generation.

Things to know about young voters in the 2016 election:

The GenForward polls showed that even the youngest voters were deeply divided along racial and ethnic lines in this year’s election. Large majorities of young black, Hispanic and Asian-American likely voters in the surveys said they planned to vote for Clinton, compared with less than half of young white likely voters who said the same.

Among young white adults, more than half of those with a college degree supported Clinton, compared with less than 4 in 10 without such a degree.

The surveys suggest that support for Trump among young white likely voters increased in the weeks immediately before the election. Exit polls conducted for the AP and television networks by Edison Research show that young whites were ultimately slightly more likely to support Trump than Clinton.

WHITE VULNERABILITY
Among young whites, the survey suggests that feelings of racial and economic vulnerability and racial resentment appear to have played a role in support for Trump.

In particular, among young whites who scored highest on a scale measuring “white vulnerability,” or feelings that whites are losing out socially and economically in today’s society, more than half said they planned to support Trump, compared to only about six percent of those scoring lowest on the scale.

The analysis shows Trump performed well among young whites who felt that gender discrimination is not a problem in society. Likewise, both young whites and young Latinos who felt that blacks need to work their way up in society without special favors and haven’t been significantly held back by racial discrimination were more likely to vote for Trump.

POLITICAL ALIENATION AND EQUALITY
The surveys show that feelings about the political system were linked to vote choices among young people from all racial and ethnic backgrounds. Young Asian Americans and Latinos were less likely to support Clinton if they had feelings of political alienation, such as that leaders in government are looking out primarily for themselves and don’t care about people like the them.

Young whites and African Americans who felt that American society and government were moving toward greater political equality were more likely to support Clinton.

Whites, blacks, Latinos and Asian Americans were all more likely to support Clinton if they had warmer feelings toward President Barack Obama.

The analysis is based on two polls of young adults age 18-30 conducted Oct. 1- 14 and Oct.20-Nov. 3. Both used samples of about 1,800 people drawn from the probability-based GenForward panel, which is designed to be representative of the U.S. young adult population. The margins of sampling error for all respondents are plus or minus 3.8 percentage points and plus or minus 3.7 percentage points, respectively.