Senator Booker says focus should be on what Hillary Clinton says now, not 1996 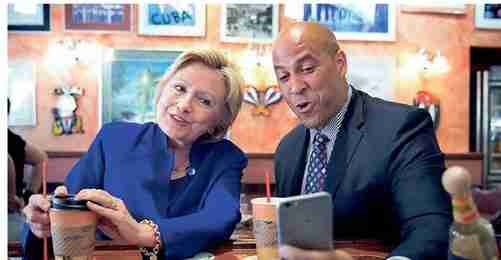 MIAMI – One of Hillary Clinton’s most prominent surrogates said black people should shift their focus from what many called racially coded words she used 20 years ago to the words she uses today as she campaigns to become the first woman president of the United States.

Senator Cory Booker was in town to campaign for Clinton throughout South Florida on Saturday and Sunday. In a telephone interview with the South Florida Times, the New Jersey Democrat who is the former mayor of Newark said Clinton is the most qualified candidate.

“I think black folks know, we all make mistakes,” Booker said regarding Clinton’s use of the phrase “super-predators,” when supporting her husband’s 1994 crime bill that he has since acknowledged worsened the country’s mass incarceration problem.

“In 1996, Hillary made comments about certain kids that were super-predators without conscience or empathy that need to be brought “to heel.”…The problem is that although Columbine occurred, the term was never used in reference to white criminals. It was only used to refer to black urban kids and to justify “three strikes,”’ attorney and writer, Ronda Lee, wrote in an April 2016 Huffington Post op-ed.

Booker said although Clinton has made mistakes, “None of us want to be held accountable for everything we said 30 years ago. The reality is that was a long time ago and it was said once.”

He said the focus should be on what “she has done since then on criminal justice reform issues.”

Also, focusing on what both candidates are currently saying, Booker said, is essential. “If people want to drag up something she said decades ago, they can, but I’m telling you, for this presidential election, listen to what the candidates are saying now. One is demeaning, degrading and disrespecting communities,” he said in reference to Republican nominee Donald Trump.

“The other is talking consistently about all Americans, lifting folks up, and confronting the continued legacy of racism, confronting implicit racial bias in policing. This is the kind of leader that’s going to have our community’s back,” he said. “Clinton is determined to do something about this broken criminal justice system and has a substantive plan to bring justice back fully to the justice system.”

Booker also spoke about Clinton’s economic agenda, which he said is about “empowering the middle class, not just the wealthiest of our country,” in addition to creating an infrastructure investment to create jobs developing a pathway to affordable college, raising the minimum wage, securing social security and establishing apprenticeship programs.

“Clinton is bringing to the job of president of the United States, not only a unique and diverse perspective as a grandmother and a mom, but she’s just bringing the skills and qualifications to lead our country. I’m ready to follow her up a hill and follow her into the tough political fights we’ll have,” said Booker, who has been mentioned as a future presidential candidate.

“Clinton is bringing to the job of president of the United States, not only a unique and diverse perspective as a grandmother and a mom, but she’s just bringing the skills and qualifications to lead our country. I’m ready to follow her up a hill and follow her into the tough political fights we’ll have,”

For voters planning to vote for Libertarian candidate, Gary Johnson, Booker said while he appreciates alternative candidates, to cast a vote for him would mean taking a vote away from Clinton.

Next post Statement from the White House on Equal Employment