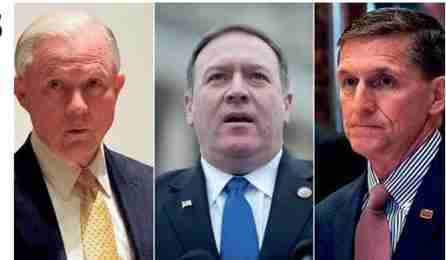 By LISA LERER and JULIE PACE

WASHINGTON – As Donald Trump fills out his Cabinet, it’s looking less like America’s population and more like the world Trump has always orbited: wealthy, white, male-dominated and business-minded.

Trump, who railed against what he called “politically correct crap” during his no- holds-barred presidential campaign, is on track to create the least diverse Cabinet in a quarter-century.

The uniformity is particularly striking in the president- elect’s picks for the highestprofile Cabinet and White House jobs. While he has selected a handful of women and minorities for lower-pro- file posts, his choices for the big four Cabinet slots – Treasury, State, Defense and Justice – and his top White House jobs – chief of staff, national security adviser and senior adviser – are all white men.

So, too, will white men run the departments of Commerce, Energy, Homeland Security and Health and Human Services as well as the Environmental Protection Agency.

Should Trump be unable to complete his term as president, the top eight people in the line of succession are white men from the Cabinet and Congress. That number could grow to 12 if he picks a white man for Agriculture secretary. North Dakota Sen. Heidi Heitkamp, a Democrat, is the only woman believed to be in the mix.

Unlike recent predecessors in both parties, Trump so far has no Hispanics in the most prominent positions.

Trump spokesman Jason Miller has pledged that the president-elect’s team will be “very broad and diverse, both with the Cabinet and the administration.”

But Trump himself seems to have different priorities: “I want people that made a fortune! Because now they’re negotiating for you, OK?” he said, at a rally in Des Moines, Iowa, last week.

Even if he appoints women or minorities to three remaining Cabinet-level posts – Veterans Affairs, Agriculture and the Office of Management and Budget – Trump will lag behind the past three administrations in creating a demographically diverse White House.

President Bill Clinton installed 10 women and minorities into Cabinet-level jobs during his first term, part of an effort to create an inclusive image for his new administration. Other presidents have followed suit: George W. Bush had nine in his first term, and Barack Obama broke records with 13, according to an analysis of data compiled by University of California at Berkeley law school professor Anne Joseph O’Connell.

“The Cabinet choices are the most visible. And, consequently, to the extent that he faces pressure on diversity, it plays out here,” said O’Connell, who added that she expects even less diversity in lower-level government posts.

“It matters that government as a whole is representative of America,” said Republican strategist Sara Fagen, former White House political director for George W. Bush. “I don’t think this says something about him and his values.”

While Obama put together the most diverse Cabinet ever, some women in his White House still felt marginalized. The concerns reached the president himself during his first year in office, leading him to hold a dinner with senior female advisers to discuss his administration’s boys-club image.

Shortly after the election, Trump met with BET founder Robert Johnson, who suggested the White House create an office of minority and urban affairs. Jared Kushner, Trump’s son- in-law and influential adviser, was in the meeting and told Johnson it was something the transition team was already considering.