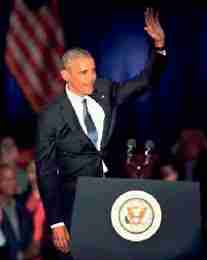 The emotional address from the nation’s first black president ranged from celebratory to precautionary at The McCormick Place Convention Center in Chicago, which is a short distance from Grant Park, where he gave his victory speech in 2008.

Shortly after the president began his speech, the crowd started chanting “Four more years!” to which Obama replied, “I can’t do that.”

He did, however, express his gratitude to the nation for allowing him to serve two terms as their 44th Commander-In-Chief.

“Michelle and I have been so touched by all the well wishes that we’ve received over the past few weeks. But tonight, it’s my turn to say thanks. … Every day I have learned from you. You made me a better president and you made me a better man,” Obama said.

Touching on everything from health care to race relations, Obama cited his administration’s accomplishments, while acknowledging there was still much more work to do.

“Yes, our progress has been uneven. The work of democracy has always been hard. It’s always been contentious. Sometimes it’s been bloody. For every two steps forward, it often feels we take one step back,” Obama said.

The passing of the Affordable Care Act (also known as Obamacare), auto bail out, 10-year low on unemployment, Iran deal, renewed relations with Cuba, work on climate change and marriage equality were some things the president heralded as accomplishments. But he stressed that he could not have achieved any of it without the American people.

“You were the change. You answered people’s hopes, and because of you, by almost every measure, America is a better, stronger place than it was when we started,” Obama said.

When he alluded to Trump’s upcoming inauguration and was met with boos from the crowd, Obama said, “No, no, no, no, no,” telling the audience it was important to have “the peaceful transfer of power from one freely elected President to the next.”

Obama also noted some of the unrealized hopes that Americans held when he was elected.

“After my election, there was talk of a postracial America. And such a vision, however well- intended, was never realistic. Race remains a potent and often divisive force in our society,” the president said.

He did, however, note progress in race relations (despite current popular opinion) and encouraged the nation to unify despite their racial, cultural, religious and ideological differences.

He advised Americans to work harder at understanding each other’s plights.

“For blacks and other minority groups, it means tying our own very real struggles for justice to the challenges that a lot of people in this country face … For white Americans, it means acknowledging that the effects of slavery and Jim Crow didn’t suddenly vanish in the ’60s,” he said.

The most touching moment of the evening came when the president paid tearful tribute to Michelle, recounting how proud she and his daughters Malia and Sasha made him.

“Michelle LaVaughn Robinson, girl of the South Side, for the past 25 years, you have not only been my wife and mother of my children, you have been my best friend,” Obama said. “You took on a role you didn’t ask for and you made it your own, with grace and with grit and with style and good humor. You made the White House a place that belongs to everybody.”

After thanking others, including Vice-President Joe Biden and his entire staff, Obama reiterated how important it is for ordinary citizens to get involved in making the nation a better place. He stated his intention to be one of them.

“My fellow Americans, it has been the honor of my life to serve you. I won’t stop. In fact, I will be right there with you, as a citizen, for all my remaining days … Yes, we did. Yes, we can,” he concluded.

Next post Hamilton Miller to celebrate MLK Day by serving