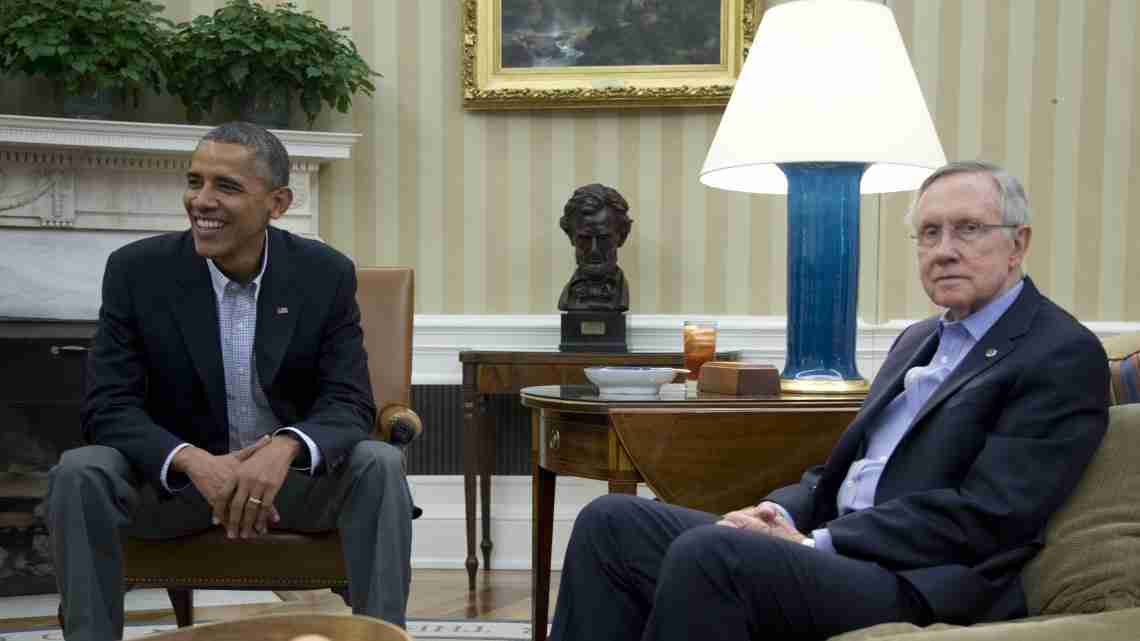 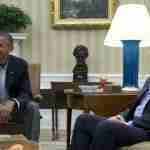 FILE – In this Oct. 12, 2013, file photo President Barack Obama, Senate Majority Leader Harry Reid of Nev., right, and other Democrat Senators meet in the Oval Office of the White House in Washington. Obama and congressional Democrats are relishing the party unity forged by the fall fiscal fights after some Democrats broke with the president this summer over Syria, government spying, and his leadership choice for the Federal Reserve. But their solidarity will face a tough test if Obama opens negotiations with Republicans on spending levels and entitlement cuts, areas where Democrats have long feared the president is willing to give away too much.(AP Photo/Carolyn Kaster)

WASHINGTON (AP) – The Democratic leaders of the House and Senate plan to huddle with President Barack Obama on Thursday to discuss strategy as Congress prepares for some momentous decisions on how best to keep the federal government operating.

A partial shutdown will occur Oct. 1 unless lawmakers provide money to keep the federal government functioning. A few weeks later, Congress will likely have to vote to raise the debt ceiling so that the government can borrow money to meet its existing financial commitments.

Obama’s meeting with Sen. Harry Reid and Rep. Nancy Pelosi occurs as the Senate’s top Republican, Sen. Mitch McConnell of Kentucky, is promising that there will be no government shutdown. McConnell reiterated on Wednesday that there will be a negotiation with the White House over easing cuts to both the Pentagon and domestic programs, a key demand of Obama’s. And he predicted for the first time that they would “crack” budget caps set by a 2011 budget-cutting law.

The White House has repeatedly threatened to veto any spending bill that keeps the automatic spending curbs, also referred to as sequestration. In a speech to business leaders Wednesday, Obama told Congress to aim higher than just passing a budget.

“If we don’t reverse the cuts that are currently in place, a lot of the drivers of growth that your companies depend on,  research, job training, infrastructure, education for our workforce, they are going to be reduced effectively at a time when other countries around the world are racing to get ahead of us,” Obama told members of the Business Roundtable, a group of CEOs from large companies.

Reid talked to reporters about some of the priorities he expects to discuss with the president on Thursday. He said that defense and non-defense programs should be treated equally when it comes to spending increases. He also would like to see Congress deal with all the vexing budget issues at once.

“We have all kinds of things that are gonna come due about the same time,” Reid said. “We shouldn’t have a multitude of these fights. We should get it done at one time.”

Obama made clear in his speech to the Business Roundtable that he will blame Republicans for any impasse that results in a government shutdown or leads to the impression there will be one, creating stress in the markets.

To reach a deal, the GOP-led Congress must take steps that include overcoming opposition from some lawmakers who want to block federal funding for Planned Parenthood. Some conservatives also face pressure to keep government spending within the levels agreed to through the 2011 legislation.

“Hard-working Americans deserve to have their policymakers live up to their promises on spending,” said a letter to members of Congress signed by numerous conservative groups, including the Club for Growth and Americans for Tax Reform.

The letter said that “even with these modest spending limits, discretionary spending will still increase in 2016 and every year thereafter.”

Going into the budget showdown, Obama is trying to make the case that the economy has greatly improved and that Congress shouldn’t do anything that would jeopardize economic growth.