Obama urges supporters to stay engaged, says he will too 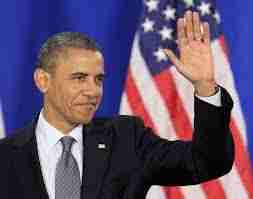 SAN FRANCISCO -President Barack Obama on Saturday encouraged supporters to be politically active, saying that he plans to remain so when his presidency concludes and declared, “I’m just getting started.”

Obama was in California for four fundraisers, one in San Francisco and three in Los Angeles. NBA star Stephen Curry and other members of the Golden State Warriors warmed up the San Francisco crowd. Those attending the Democratic National Committee fundraiser paid between $250 and $10,000.

Obama has been using his fundraising speeches and many others these days to point to progress he said the country has made during the past seven years, including a drop in the unemployment rate and the addition of millions of people to the rolls of those with health insurance.

The president told the 1,000-plus people attending the fundraiser in San Francisco that Republican candidates seeking to succeed him are painting a dismal picture for voters.

“There’s almost no measure by which we’re not better off than when I took office and when we started this process for change,” he said. “But it does kind of make you wonder. Why are so many Republican politicians so down on America? Why are they so grumpy?”

Obama got some of his loudest applause when making the case for changes in the nation’s gun laws, saying the amount of gun violence taking place in the U.S. is not normal.

“We know we’ve got to do something to prevent the kind of gun massacres that we see with growing frequency in this country,” he said.

In Los Angeles, Obama attended his first fundraiser at the home of movie director J.J. Abrams. He then went to a fundraiser for the DNC where about 200 supporters contributed up $33,400. Jamie Foxx and his band performed before Obama spoke.

Obama returned to the gun issue near the close of his remarks at the DNC fundraiser in Los Angeles. He noted that he went to Oregon the day before to visit with families of those killed at the community college. Two more college shootings occurred on the same day. While some protested during his visit, Obama said he felt just a strongly that such shootings are not inevitable and that the public should encourage lawmakers to take on the gun issue.

The White House said that Obama called Turkish President President Recep Tayyip Erdogan to express his condolences for the twin explosions Saturday that killed at least 95 people attending a peace rally in Ankara.

Obama was scheduled to go to the San Diego area for golf on Sunday and Monday, then head back to Washington.

Next post Rivers crest, I-95 opens as South Carolina turns to recovery