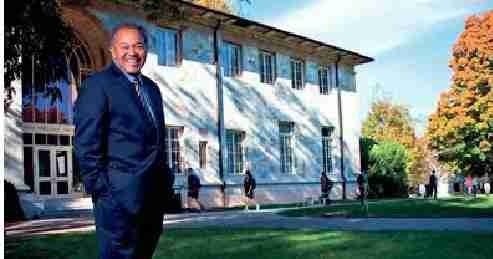 ATLANTA – The classroom held all the moroseness of a funeral parlor. Just 16 hours had passed since Donald Trump had won the presidency, and in this “Faith and Politics” class at Emory University, graduate students talked of being shocked and wounded, fearful and horrified. From shaky voices, there was conviction that bigotry had prevailed, and from eyes, tears fell. But from the syllabus came a stern reminder: They needed to find a way to fix this.

Just a month remained until the students’ deadline for final papers proposing how to heal this divided nation. Theology professor Robert Franklin reminded them that many would go on to be ministers whom congregants look to on days like this.

As winter break drew near, the papers streamed in. In their writing, students recounted their required volunteer stints with political campaigns, knocking on strangers’ doors and dialing their phones. They cited the work of great thinkers and deft political observers; the hallowed words of the Declaration of Independence and the castigated ones of the Dred Scott decision. They wrote of racism and gay rights and health care.

What they largely evaded, though, was substantive exploration of the idea of healing. Kathryn Stanley, a 49-year- old teacher, daughter of a preacher and member of Atlanta’s renowned Ebenezer Baptist Church, sidestepped the issue altogether. The day after the election, she sobbed alongside her junior high school students even as she urged them to maintain hope in the face of their fears, and that night she cried again as she spoke to her classmates.

Four weeks later, she conceded she was no more ready to give Trump a chance, nor to devise a blueprint for healing.

“I’m not in the healing space yet,” she said.

Likewise, Georg Stahlmann, a 24-year- old from Gottingen, Germany, working on a Master of Divinity degree in preparation for Lutheran ministry, viewed with a measure of mirth the peculiarities of American politics and the openness with which people’s preferences were discussed. He parsed the intersection of religion and politics. As for healing, though, he omitted the topic from his assignment.

Wesley Smithart, a 23-year-old who teaches a course at a women’s prison and plans to become a lawyer, struggled with the question, too. She wrote of allowing people who feel silenced to share their thoughts even if they are painful to hear. But specific proposals for healing seemed elusive.

“When you think about what would it look like for a divided America to heal from this, I’m just not sure it’s that easy,” she said. “I’m not sure there’s one specific version of a healed America. I’m not sure America has ever been whole in the way that a word like healing makes you think.”

Franklin is a seasoned scholar and an ordained minister, the former president of Morehouse College and the author of multiple books. He taught “Faith and Politics” once before, in 1992, but did not challenge students to fix the national polarization. It wasn’t as pronounced then, he explained. As the papers arrived and Franklin’s own cutoff to report grades approached, he noted the trouble many seemed to have with the question. “Maybe my expectations were too high,” he said.

The night after the election, as Franklin and his students gathered, he was taken aback by the degree of fear and the feelings of grief he heard. One student said her sister found a Ku Klux Klan flyer that morning on her car outside her Alabama home. A Latino man pondered aloud if he was willing to be arrested for civil disobedience should deportation forces be dispatched. A woman with an Indian boyfriend worried his bearded face would have him mistaken for a Muslim and make him a target.

Searching for meaning, Stanley said she knew there was still a God, while a classmate said maybe things had to get worse before they got better.

Off in a back corner, the lone conservative in the class, a 33-year-old lawyer named Stephen Tippins, stayed quiet. He couldn’t bring himself to vote for Trump, skipping the presidency on his ballot, but he didn’t share his classmates’ pain. As students were called to the lectern that night and a week later, the reluctant Tippins went last.

He touched on a question that formed the basis for his final paper: “Heal from what?” He concedes the country may think it’s more divided, but wonders if it really is.

“I don’t know that it’s healing that we need so much as lucidity and perspective. A lot of the division is self-inflicted or self-fulfilling prophecy. It’s not nearly as divisive as it has literally been divided. We don’t have 20,000 people dying at Antietam,” he said, referring to the Civil War battle.

The discord in Room 322 of the Rollins Building reflected the state of the nation as Trump nears inauguration. Even as the president-elect’s victory speech urged unity, the weeks that have followed have seen little of it, with protests and hard feelings exacerbated by White House appointments seen by many as further driving a wedge between left and right.

Franklin himself wondered what move or what singular figure might bring people together. His theological background nudged him toward thinking it could be a religious leader, perhaps an evangelical pastor popular with Trump supporters. He pointed to the post-apartheid healing in South Africa, where the Truth and Reconciliation Commission was a major step and Nelson Mandela and Archbishop Desmond Tutu emerged as key unifying figures.

“I do feel the denial and the unreadiness to lead on healing and reconciliation,” he said. “I think they’re open to conversations and they’re desirous of that, but I don’t think they really know where to start.”