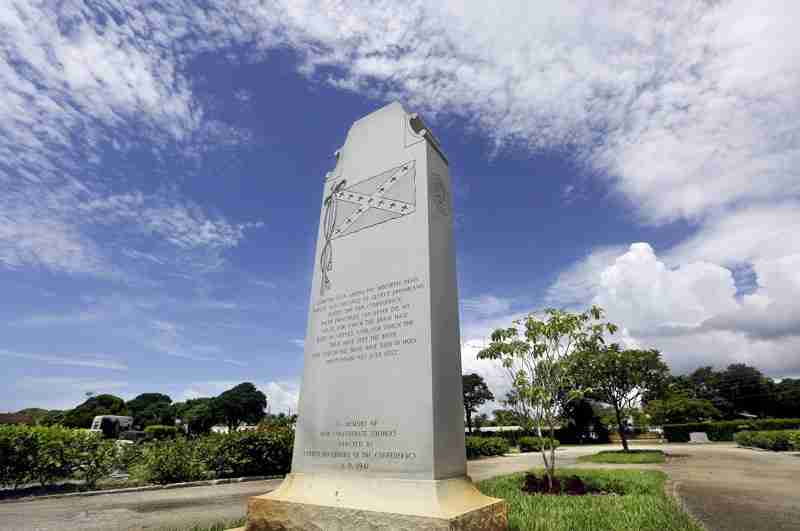 WEST PALM BEACH, Fla. – In the wake of recent political protests and heightened racial tensions, many in South Florida are reminded of a dark past that has gripped the nation for decades.

Less than a month after violence erupted in Charlottesville, Va. over a decision to remove a statue of Confederate Gen. Robert E. Lee, many elected officials, political activists and community leaders have called for all public monuments representing the Confederacy to be removed.

Here locally, the City of West Palm Beach recently announced its plans to remove a monument from a public cemetery that honors Confederate soldiers who fought in the Civil War.

The privately owned statue has been in existence since the 1940s and is owned by United Daughters of the Confederacy, a non-profit based in Richmond, Va.

“Well before the events in Charlottesville and all of the occurrences that have happened over the past weeks, we removed all of our public Confederate statues,” said City of West Palm Beach Mayor Jeri Muoio, who recently spoke during a press conference. “I believe strongly that they are signs of hate and bigotry, and we don’t want that here in our City.”

The Southern Poverty Law Center launched a study in 2016 that identified more than 1,500 publicly sponsored symbols across the nation that represent the Confederacy. These prominent displays included monuments and statues, flags, names of schools and roads, and even recreational venues.

Here in South Florida, a few Confederate symbols can still be found in local neighborhoods and communities. Forrest Street, located in Hollywood’s predominantly black Liberia neighborhood, is named after Ku Klux Klan leader and Confederate Gen. Nathan Bedford Forrest, and Old Dixie Highway – which has been criticized by some as another representation of the elements of slavery and racial discrimination – still runs through Palm Beach, Broward and Miami-Dade counties.

For Marcia Samuels, Esq., a resident of Delray Beach who immigrated to the United States in 1974 from Jamaica, the debate surrounding the issue of Confederate monuments and symbols brings her sadness and distress having experienced the impact of racism during her own lifetime.

“Confederate monuments should absolutely be taken down from public spaces. Yes, they are a part of history, but they also evoke a certain ideology of hatred toward people of color and should be stored in a museum,” said Samuels.

“History teaches us that racism has been institutionalized, affecting how we think and how we act, as well as our educational and economic conditions. It’s time for us, as a nation, to remove the reminders of our divisive past and for us to have an open and true dialogue that includes people of all races so that we can progress as a society.”

This is not the first time the debate about existing Confederate symbols and monuments has reached the tri-county region. In 1990, members of Veterans of Foreign Wars Post 8195 rallied to remove the Confederate battle flag that flew over Young Circle in Hollywood, citing the flag as an offensive symbol of racism.

Monica Ferrell, a personal relationship coach who resides in Lauderhill, Fla., said black people coming together won’t necessarily be enough to change the attitudes of those who support keeping the monuments. She added historical lessons need to be learned in order for the country to move forward.

“The signs and monuments exist as a symbol of what is already in the minds of many throughout the nation, and there needs to be a change in universal conscience,” said Ferrell. “There are internal issues with individuals holding on to their Confederate heritage, and those issues are something that black people simply have no control over.”