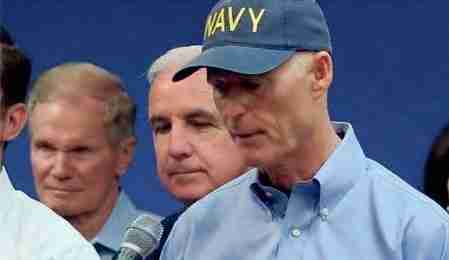 TALLAHASSEE, Fla.- Florida Gov. Rick Scott, who has clashed with the state Supreme Court during his time in office, wants a current justice disqualified from a pending case that could affect the future of the high court.

Scott on Monday filed a motion that contends Justice Barbara Pariente may be biased against the Republican governor. The motion is based on comments made case by Pariente, including one after a recent hearing in a case on Scott’s appointment power.

McKinley Lewis, a spokesman for Scott, said Pariente’s “past remarks cast grave doubt on her ability to take an objective and unbiased position.”

The League of Women Voters of Florida and the government watchdog group Common Cause filed a petition with the Supreme Court back in June challenging Scott’s power to appoint three new justices.

Age limits are forcing three justices to retire on the day Scott leaves office in January 2019 because of term limits. Scott has said he plans to name their replacements that same morning.

The decision could change the balance of the court for decades. If Scott gets his way, the seven-member court will be stacked with six conservative judges as more liberal justices Pariente, Fred Lewis and Peggy Quince step down. Pariente was appointed to the court in 1997 by then-Gov. Lawton Chiles, a Democrat.

Scott’s general counsel, who also sits on the panel that would recommend nominations to Scott for those positions, cited two incidents in the motion asking for Pariente to be disqualified. One came from 2012 when Pariente asked voters to keep her on the bench. She was quoted during a campaign event as saying “a vote no will give Gov.

Scott the right to make his appointments, which will result in partisan political appointments.”

The other incident occurred last month right after the court held a hearing in the judicial appointment case. Pariente was seen on the state’s public access channel talking to Chief Justice Jorge Labarga and pointing to a document. That document was a list of the members of the Supreme Court Judicial Nominating Commission. At one point Pariente can be heard saying “crazy.”

Craig Waters, a spokesman for the court, said the court could not comment on a pending motion.

This is not the first time Scott has clashed with justices. Five years ago, Scott asked the Florida Department of Law Enforcement to review the actions of Pariente and two other justices after they nearly missed qualifying for the ballot that year. That investigation showed the justices had campaign forms notarized by state employees during working hours. FDLE’s investigation determined that the other four justices also used court personnel to notarize financial disclosure forms – a practice largely for convenience.

Willie Meggs, the Tallahassee area prosecutor at the time, declined to prosecute the case, saying the law “does not concern itself with trifles.” Meggs acknowledged that FDLE’s investigation showed the judges had apparently run afoul of the statute, but he wrote to FDLE that “common sense should be used in deciding cases.”

“In this case, notarizing a signature is a minor act which was likely accomplished in less than a minute,” wrote Meggs.

Next post Royal romance to become a historic Royal marriage