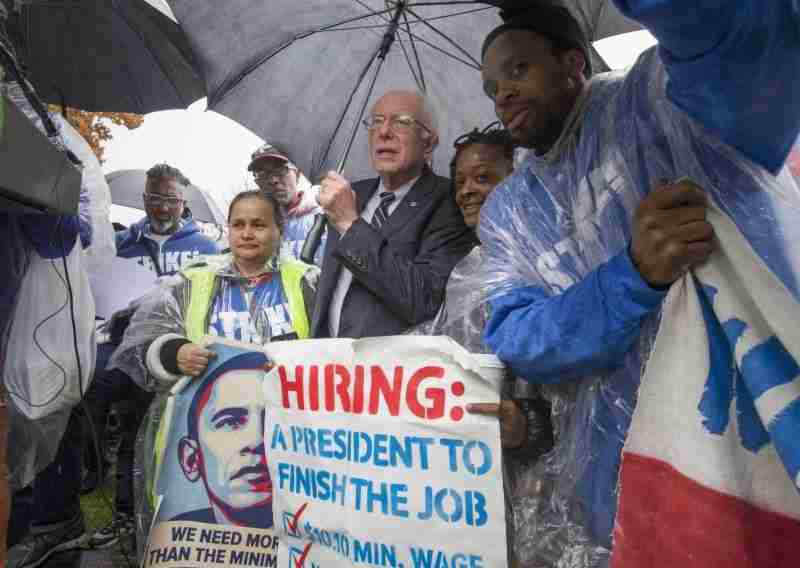 WASHINGTON (AP) – Vermont Sen. Bernie Sanders raised more than $33 million during the past three months in his bid to win the Democratic nomination, his campaign said on Saturday, just short of the amount brought in by rival Hillary Clinton during the same period.

Sanders, a self-described democratic socialist, has now collected $73 million for the primaries through a powerful online fundraising apparatus that should help him compete with Clinton deep into spring. His haul will allow him to spend money at a comparable rate with Clinton, who raised $37 million since the beginning of October and $112 million during 2015 for her primary campaign.

“This people-powered campaign is revolutionizing American politics,” said Jeff Weaver, Sanders’ campaign manager, in a statement. “What we are showing is that we can run a strong, national campaign without a super PAC and without depending on millionaires and billionaires for their support. We are making history, and we are proud of it.”

Clinton is the Democratic front-runner in national polls, but Sanders remains within striking distance against her in Iowa, which holds its caucuses on Feb. 1. Sanders is hoping to surprise Clinton in Iowa and then use his New England ties to defeat her in the New Hampshire primary on Feb. 9, where polls have shown him with a slight advantage.

The campaign finance estimates indicate that Sanders should have the resources to mount an effective challenge: His campaign said it had $28.4 million in the bank at the end of 2015.

Clinton’s campaign, which spent about $75 million during 2015 to build a large data-driven organization, ended the year with $38 million in cash on hand. Sanders spent about $45 million in 2015. He stepped up his expenditures during the fourth quarter when he began television advertising and increased the size of his paid staff in early states.

Most of Sanders’ fundraising came through 2.5 million donations, most of them made online, a number that his team said surpassed President Barack Obama’s record number of 2.2 million donations in 2011.

Sanders’ average donation was $27, an amount that will allow him to return to his contributors for more money during the spring. Only a few hundred of his 1 million individual donors gave the maximum of $2,700 for the primary, the campaign said.

Sanders, by comparison, did not raise any money for the DNC last year, although his campaign has said it plans to fundraise on behalf of the national party.

The third major Democrat in the race, former Maryland Gov. Martin O’Malley, has not yet provided fundraising estimates for the quarter but has struggled against Clinton and Sanders in both donations and polls.

Both Clinton and Sanders have raised money at strong clips compared to a large field of Republicans. Texas Sen. Ted Cruz’s campaign said it had raised nearly $20 million in the fourth quarter and estimated that he would finish the year having raised more than $45 million.