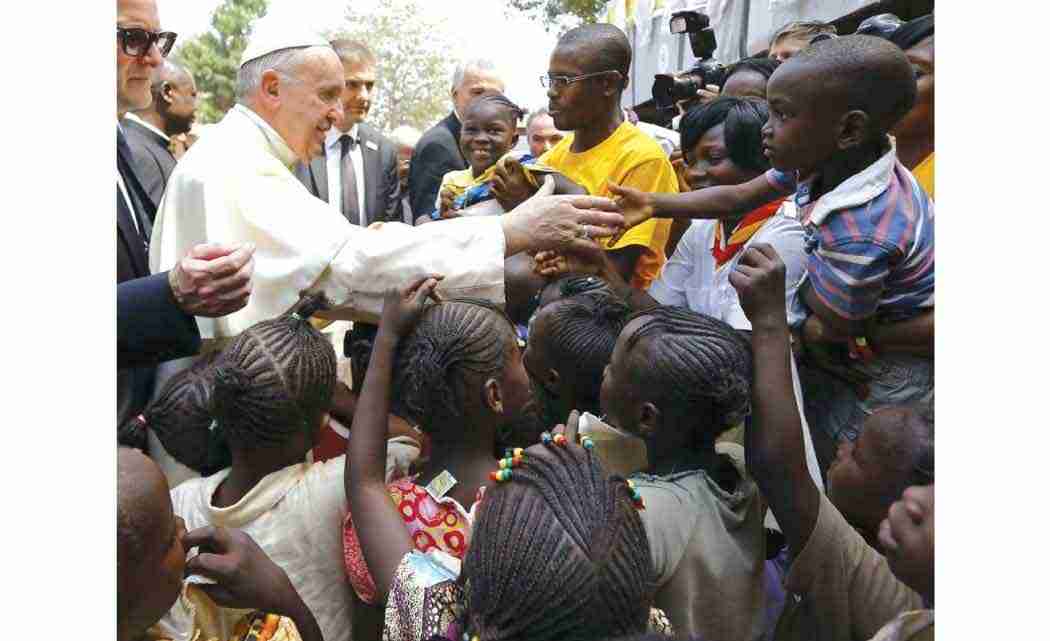 By NICOLE WINFIELD and KRISTA LARSON

Francis issued the appeal from the altar of Bangui’s cathedral after arriving in the badly-divided capital on the final leg of his three-nation African tour.

Schoolgirls dressed in the yellow and white of the Holy See flag and women wearing traditional African fabric dresses emblazoned with the pope’s face joined government and church authorities to welcome Francis at Bangui airport amid tight security.

Cheering crowds lined his motorcade route – about five kilometers (three miles) of it in his open-sided popemobile. The crowds swelled again at a displacement camp, where children sang him songs of welcome and held up hand-made signs saying “Peace,” ‘’Love” and “Unity.”

“My wish for you, and for all Central Africans, is peace,” Francis told the nearly 4,000 residents in the St. Sauveur church camp. With the help of a Sango translator, he then led them in a chant: “We are all brothers. We are all brothers.”

“And because we are brothers, we want peace,” he said.

Sunday’s visit was a rare moment of jubilation in Central African Republic, where Muslim rebels overthrew the Christian president in early 2013, ushering in a brutal reign that led to a swift and horrific backlash against Muslim civilians when the rebel leader left power the following year.

Throughout the early months of 2014, mobs attacked Muslims in the streets, even decapitating and dismembering them and setting their corpses ablaze. Tens of thousands of Muslim civilians fled for their lives to neighboring Chad and Cameroon. Today, the capital that once had 122,000 Muslims has only around 15,000, according to Human Rights Watch.

Overall, 1 million people in a country of 4.8 million have been forced from their homes.

While ecstatic crowds celebrated the pope’s visit and message of reconciliation, thousands of Muslims remained essentially blockaded in their neighborhood of PK5, unable to leave because of the armed Christian militia fighters called the anti-Balaka who surround its perimeter.

Francis plans to enter this highly volatile neighborhood on Monday morning to meet with the local imam and Muslims in the mosque before returning to Rome.

In his inaugural Mass on Sunday night, Francis reminded the faithful that their primary vocation was to love their enemy and be courageous in forgiving and overcoming hatred, violence, persecution and injustice.

“To all those who unjustly use weapons in this world, I appeal: Put down your weapons of death; arm yourselves instead with justice, love, mercy and authentic guarantees of peace,” he said to applause.

The precarious security in Bangui, which is awash in weapons, had raised the possibility in recent weeks that the pope could cancel his visit or at least trim it back. While sectarian clashes have left at least 100 people dead over the last two months, in recent days Bangui has been relatively free of gunfire.

Welcoming Francis at the presidential palace, President Catherine Samba-Panza thanked him for his “lesson in courage” in simply coming, saying his presence showed the “victory of faith over fear.”

In a nod to Francis’ appeal for personal soul-searching, she offered a public confession.

“In the name of the entire governing class of this country and also in the name of all those who have contributed in some way to its descent into hell, I confess all the evil that has been done here over history and ask forgiveness from the bottom of my heart,” she said.

In response, Francis told her he was here as a “pilgrim of peace, an apostle of hope,” and that he hoped elections scheduled for next month would enable the conflict-torn country to “serenely begin a new phase of its history.”

But the security situation remains tense and fragile: Bangui’s archbishop travels into the city’s Muslim enclave under escort from armed peacekeepers. Bangui has long been under a nightly curfew of 8 p.m. as gunbattles have rung out after dark in the flashpoint neighborhoods.

Adding to the joy of Francis’ arrival was that the curfew was extended to 10 p.m. to accommodate the prayer vigil Francis celebrated Sunday night at the cathedral.

Security, however, was understandably tight.

A U.N. helicopter hovered overhead at the airport and armed peacekeepers on foot stood about 20 feet (six meters) apart lining the road into the capital before the pope’s arrival. Vatican gendarmes already on the ground when Francis arrived donned flak vests – an unusual if not unprecedented occurrence.

“It is a great joy and we are very touched that he is coming to visit,” said Merline Bambou, 24, as she left Sunday Mass wearing a two-piece dress with Francis’ face on it. “For two years we have been crying. We hope the visit of the pope will change things for the better.”

Francis underscored the message of the need for forgiveness and mercy by hearing confessions from several young Catholics at a Sunday evening vigil.

He started the Mass with a ceremonial opening of the cathedral’s Holy Door – officially launching his Jubilee Year of Mercy a week early in a bid to give Africa a special spiritual boost.

Brigitte Kanga, 50, among the thousands gathered on the lawn outside the cathedral for the Mass on Sunday, said she personally was ready to forgive but she knows not all those who suffered under the Muslim rebel regime are ready to do the same.

“Nothing is impossible but it will take time.”

The Muslim community, as well, hopes the visit will improve the bleak condition they’re living in. Imam Oumar Kobine Layama, presidennt of the Central African Islamic Community, said the country’s Muslims want the pope to pray for them all.

“For the reconciliation of our hearts, the hearts of all the Central Africans, and be the door – our open door – because we don’t have a voice now, we are really living in a precarious situation that doesn’t have a name.”

Next post Apply to Seal or expunge your criminal record