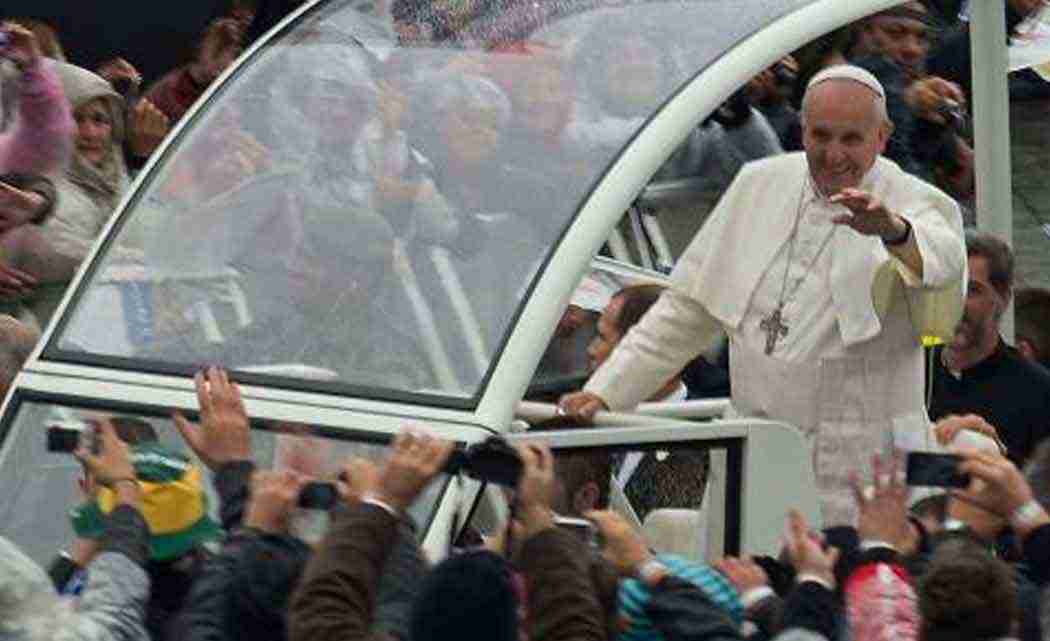 By NICOLE WINFIELD and FRANK BAJAK

QUITO, Ecuador — Latin America’s first pope returned to Spanish-speaking South America for the first time Sunday, stressing the need to protect the poor and the environment from exploitation and to foster dialogue among all sectors of society.

Children in traditional dress greeted Francis at Mariscal Sucre airport outside Ecuador’s capital, the wind blowing off his skullcap and whipping his white cassock as he descended from the plane following a 13-hour flight from Rome. He greeted and kissed several indigenous youths waiting for him on the side of the red carpet.

In a speech in front of President Rafael Correa, Francis signaled some of the key themes for the visit, which will also take him to Bolivia and Paraguay: the need to care for society’s most marginal, guarantee socially responsible economic development and defend the Earth against profit-at-all-cost development that he says harms the poor the most.

“From the peak of Chimborazo to the Pacific coast, from the Amazon rainforest to the Galapagos Islands, may you never lose the ability to thank God for what he has done and is doing for you,” he said from the tarmac. “May you never lose the ability to protect what is small and simple, to care for your children and your elderly who are the memory of your people, to have confidence in the young and to be constantly struck by the nobility of your people and the singular beauty of your country.”

It’s a message that is particularly relevant for Ecuador, a Pacific nation of 15 million people that is home to one of the world’s most species-diverse ecosystems and the Galapagos Islands, which inspired Charles Darwin’s theory of evolution. While oil has brought Ecuador unparalleled revenues in recent years, the accompanying deforestation and pollution have stained its vast swaths of Amazonian rain forests where many indigenous peoples live.

Falling world prices for oil and minerals, though, is now threatening to fray the generous social safety net woven by Correa, who has been buffeted for nearly a month by the most serious anti-government street protests of his nearly nine years in power. Along Francis’ motorcade route into Quito, some onlookers shouted “Correa out!” and gave a thumbs down gesture.

Standing by Correa’s side at the airport, Francis pledged that the Catholic Church was ready to help meet the challenges of the day by encouraging a respect for peoples’ differences, “fostering dialogue and full participation so that the growth in progress and development already registered will ensure a better future for everyone, with particular concern for the most vulnerable of our brothers and sisters.”

Correa, for his part, echoed many of Francis’ own themes about the “perverse” global economic system that keeps the poor on the margins while the rich get richer, exploiting the Earth’s natural resources in the process.

The Vatican spokesman, the Rev. Federico Lombardi, said Francis wasn’t worried about the protests against Correa. He estimated 500,000 people lined the route that took Francis to the Vatican ambassador’s residence. Many in the crowd said they hoped the pope would have a calming effect on the country’s tense political situation.

“We are living difficult moments in our country, and Francis brings a bit of joy,” Valdeon said.

The “slum pope” chose to visit Ecuador, Bolivia and Paraguay specifically because they are among the poorest and most marginal nations of a region that claims 40 percent of the world’s Catholics. He’s skipping his homeland of Argentina, where he ministered to the poorest slum-dwellers while archbishop, to avoid papal entanglement in this year’s presidential election.