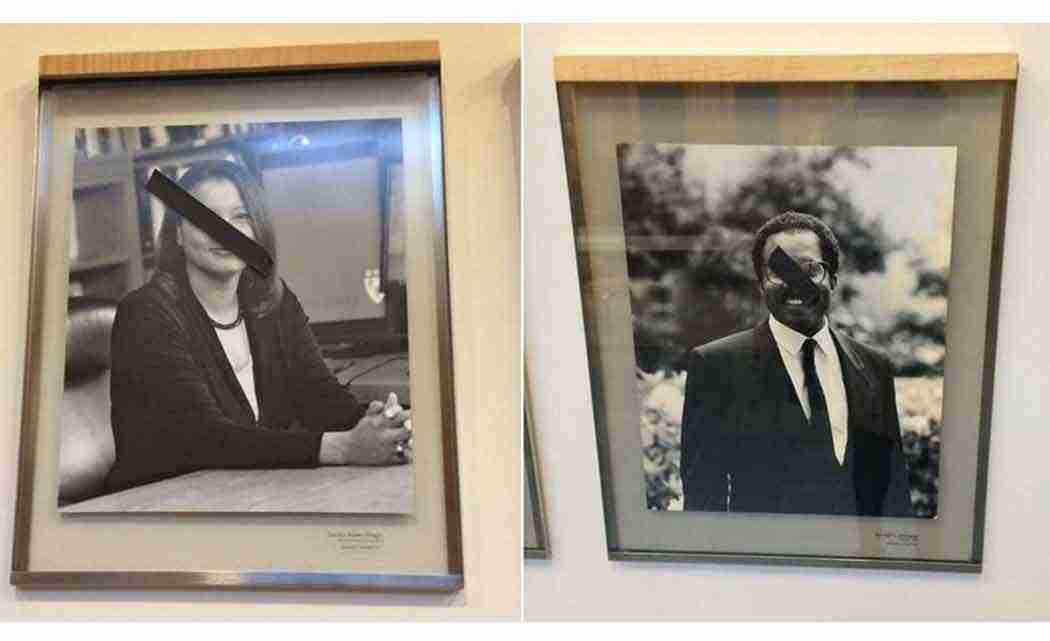 BOSTON — Portraits of several black professors were found vandalized at Harvard Law School on Thursday, a day after a campus rally for black students.

Black strips of tape were placed diagonally over at least five photo portraits, Harvard officials said. Students and professors noticed the tape as classes met on Thursday morning at Wasserstein Hall, which houses two hallways lined with framed portraits of more than 180 professors.

“Expressions of hatred are abhorrent, whether they be directed at race, sex, sexual preference, gender identity, religion or any other targets of bigotry,” the law school’s dean, Martha Minow, said in a statement.

She added that the vandalism was being treated as a hate crime.

The discovery stirred the campus a day after students rallied in support of black students across the United States. Racially charged protests at the University of Missouri this month touched off a wave of demonstrations and frank discussions about race at many other campuses.

Harvard students have called on the law school to open a diversity office, among other demands. And some students are pushing the law school to change its official seal, which is borrowed from the family crest of an 18th-century slaveholder whose estate helped found the school.

A university spokeswoman said she didn’t know if there’s a connection between the recent protests and the vandalism.

Some students said they were disturbed by the vandalism, calling it an overt display of racism.

“I know what it looks like when you’re being told to get back into your place, and I think that is very much what this looks like,” said Rena Karefa-Johnson, a third-year law student and a leader of Students For Inclusion, an activist group supporting minority students at the law school.

“This kind of proves that we’re not just making this stuff up,” said Shelton, who is president of the Harvard Black Law Students Association.

Amid pressure from students, the law school’s dean called an open meeting on Thursday to discuss the vandalism and issues tied to race.

By Thursday afternoon, the tape had been removed from the glass over the portraits, and students were sticking notes of support around the photos.