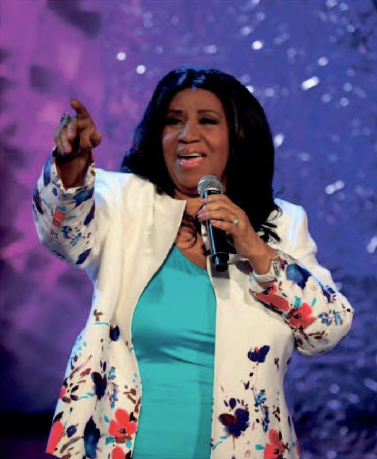 NEW YORK (AP) – Aretha Franklin received an honorary Pulitzer Prize on Monday, as judges praised the Queen of Soul “for her indelible contribution to American music and culture.” Competitive Pulitzers were awarded to books about two other giants of American history: Frederick Douglass and Alain Locke.

The Life of Alain Locke.” Richard Powers’ innovative novel “The Overstory,” which shows us the world through the perspective of nature, won for fiction. The drama prize went to “Fairview,” by Jackie Sibblies Drury, and Eliza Griswold’s “Amity and Prosperity: One Family and the Fracturing of America” won for general nonfiction. Ellen Reid’s opera “p r i s m,”

which tackles sexual and emotional abuse, was given the music award, and Forrest Gander’s elegiac “Be With” the poetry prize.

Franklin, who died last summer, was the first woman singled out for an honorary Pulitzer, which has been given to Bob Dylan and John Coltrane among others. The lives of Franklin, Douglass and Locke spanned and helped define more than a century of political and social change: Douglass was the country’s leading abolitionist of the 19th century, Locke the so-called “Dean” of the Harlem Renaissance of the 1920s and 1930s and Franklin a transcendent and inspiring voice of the civil rights and feminist movements of the 1960s and 1970s.

“I think one of the through-lines of those three lives is music,” says Stewart, whose Locke biography also won a National Book Award.

“Frederick Douglass was one of the first people to provide an intellectual portrait of the spirituals, to show they were not just religious music, but statements of humanity and longing for freedom among the slaves. For Locke, spirituals were his favorite musical forms because they had that religiousphilosophical dimension of the black experience, culled into a unique aesthetic form. And then you think of Aretha Franklin, who came out of gospel and brought into it popular music. So you can see a real continuum.”

Drury’s “Fairview” brings the story of African-Americans into the present, skewering white people’s obsession with black stereotypes. It begins as a contemporary domestic comedy involving a well-off black family and ends with the invisible fourth wall destroyed and the audience pulled down a rabbit hole of race and identity. The Pulitzer board called it a “hard-hitting drama that examines race in a highly conceptual, layered structure, ultimately bringing audiences into the actors’ community to face deep-seated prejudices.”