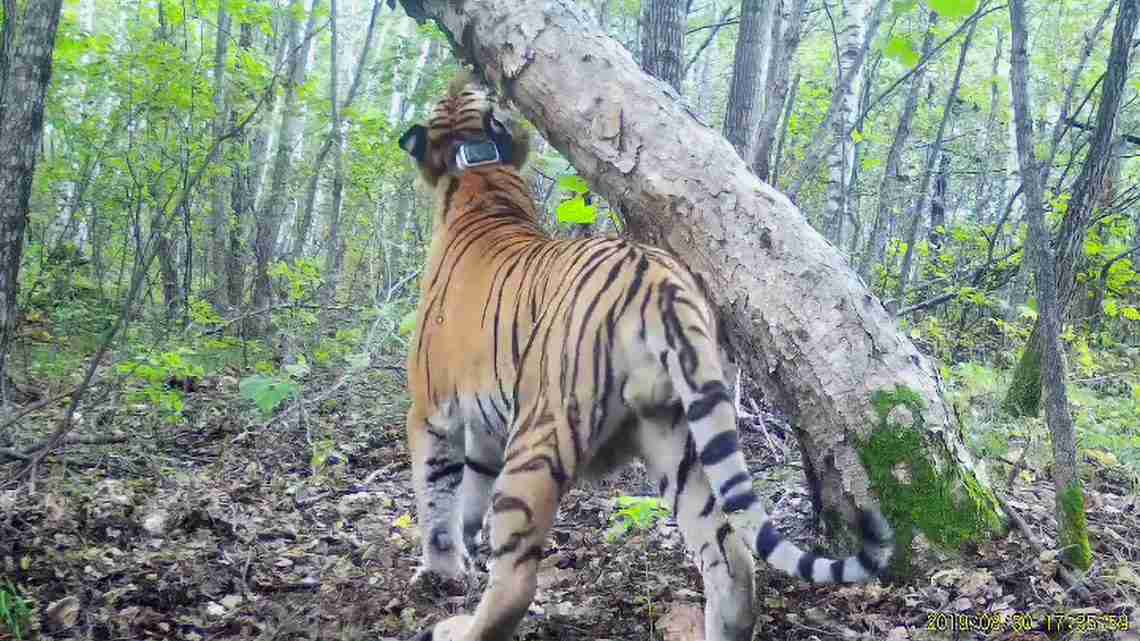 World leaders have their pet projects—and their pets.

In the United States, Donald Trump stands out as the first president in 119 years not to own a pet in the White House.

On the other side of the world, Russian President Vladimir Putin has tigers.

One of Putin’s endangered Siberian tigers, this one named Boris, has fathered what experts say are four litters of cubs with different tigresses while crossing vast swaths of territory.

Putin himself released Boris back into the wild in May 2014. The Siberain tiger (Panthera tigris altaica), which had been found as a starving, motherless cub, was released into the forests of the Jewish Autonomous Oblast (district) in far southeastern Russia near the border with China.

The 14,000-square-mile Jewish Autonomous Oblast natural park where Boris was released is one of the few sufficiently sized remaining natural habitats for tigers.

The Amur Tiger Center and the federal Amur Tiger Conservation Programme work to re-establish a sustainable population in the region, a preservation project that is championed by, and has enjoyed considerable attention from, Putin.

Putin is a patron of the program where Boris, known as “Putin’s Tiger,” underwent rehabilitation with five other cubs before being released by the president in a nationally televised publicity stunt.

The last sightings of Boris were in May, where one of the area’s photo devices captured him during one of his long nocturnal hikes, the Amur Tiger Center told Zenger News. The center also keeps track of his whereabouts via satellite.

Boris has wandered some 310 miles (500 kilometers) through the woods since his release, and he was recently spotted with a tigress named Lazovka, data provided to Zenger News by the Amur Tiger Center revealed.

There is 99% certainty that Boris is the father of four litters of cubs with three tigresses, Svetlaya, Philippa and Lazovska, the center said, and he has proved to be such a master of the huge territory that he even takes on bears, in one case killing and eating an adult bear—a rare occurrence in eastern Russia.

Bears and tigers share the same habitats, and Boris was so thorough in devouring the bear that it was impossible to establish whether the bear was a brown bear or an Asian black bear.

“By the time we arrived at his hunting ground, there wasn’t much left of Boris’ feast,” the nature park’s deputy director, Vyacheslav Kastrikin, said at the time of the attack in 2015.

“Boris the tiger is now the father of many cubs as he has mated with three tigresses already, and with one of them that he first mated with six years ago, he has already fathered a second litter,” Aramilev said.

“Boris is in perfect shape,” Aramilev said. “He often is being noticed by tigresses who later give birth to tiger cubs. We are confident that Boris is the only male in the region, that’s why his paternity is clear.”

The most recent litter was born in January, but the information has only just been released. Video taken in December 2019 and February 2020, also only just released, shows Boris walking through the snowy landscape and marking his territory by rubbing his neck on a tree and scent marking.

The Amur tiger, more widely known as the Siberian tiger, is named after the Amur River, a 1,750-mile-long river that marks the border between Russian Siberia and the Chinese Manchuria region, an area that has been a home to the tigers for centuries.

The largest of the nine known tiger subspecies, the Amur tiger can weigh up to 700 pounds and reach a fully grown size of 10 feet. It came close to extinction due to poaching and human infringement on its natural habitats, but the population has been on the rise in recent years as a result of vigorous conservation efforts.

The Siberian tiger is listed as endangered on the International Union for Conservation of Nature’s Red List.

The total number of tigers in Russia was 580-600 individuals in the autumn of 2019. Of those, an estimated 20 tigers live in the Jewish Autonomous Oblast area, up from just one lone tiger in 2013.

Katya, another big cat that was also released by Putin alongside Boris in 2014, caused quite a stir herself when she crossed the border into China in 2015, where she attacked and ate a domestic dog.

Putin has spent much time and political capital on the Siberian tigers and is said to personally monitor the movements of the ones he helped release into the wild via satellite tracking.

In 2019, Russian media quoted him as saying: “In recent years, thanks to the tireless, painstaking work of biologists, ecologists, local historians, volunteers, it has been possible to achieve serious, tangible results in preserving and increasing the number of Amur tigers, in creating suitable living conditions.”

The Amur tiger is a national symbol in Russia, and although Putin’s love of wildlife and animals is well documented, it is no coincidence that he has picked the big cats as his heavily publicized pet project.

In a Russian political context, Boris is more than a feel-good story about an endangered species. The virile tiger provides a narrative taken straight out of the Kremlin power playbook.

It’s a kind of subliminal communication that Putin has pursued since he rose to power in the 1990s. Putin flies a jet, rides a Harley-Davidson motorcycle and goes horseback riding, bare-chested, in the wilderness. And he rescues tigers.

The story of Boris, who is in the process of repopulating an area twice the size of New Jersey, is a classic example of how Putin tries to shape the Russian public’s perception of him, Russia expert Keir Giles, a senior consulting fellow of the Russia and Eurasia Programme at Chatham House in London, and head of the Conflict Studies Research Centre in the UK, told Zenger News.

He pointed to an excerpt from his 2019-published book “Moscow Rules – What Drives Russia to Confront the West” to underscore this point.

“When not conducting official duties, President Putin routinely and publicly engages in manly pursuits, with or without a shirt. This alternately amuses and bemuses Western audiences, since the emphasis on masculinity appears over the top and verging on the camp,” Giles writes in the book.

“Such behaviour is so out of kilter with Western norms that liberal commentators struggle to explain its appeal, and search for deeper meanings: to gender studies professionals, this ‘use of gender norms [is] part of a legitimation strategy employed by regimes in power and by their political opponents.’”

“Put more simply, in a country where acceptance of gender stereotypes is widespread and considered normal, and furthermore the need for a strong leader is generally recognized, there is nothing untoward about reassuring demonstrations by that leader that he is a man’s man.”

One time Putin almost stumbled was in 2008, when the Russian press was invited to witness the president putting down a Siberian tigress with a tranquilizer dart in order to equip her with a tracking collar.

It was later revealed that the tigress wasn’t a rescued animal about to be re-released, but had been brought in from a local zoo solely for the photo opportunity. The incident earned Putin some scorn in local news, but not enough to discourage him.

“Yes, I know, they were caught before, but the most important thing is to draw public attention to the problem,” Putin told reporters in Moscow.

Previous post Test your news knowledge with Zenger: a sports team’s new name and the return of retail