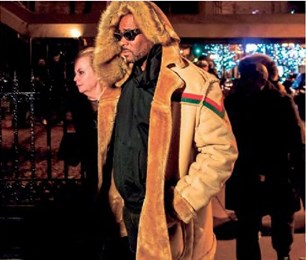 CHICAGO (AP) – When R. Kelly was released on bail after spending the weekend in a Chicago jail, he headed straight to a McDonald’s — a restaurant chain he has fond childhood memories of but that also features in the allegations that he preyed on teenage girls.

Almost immediately after Kelly posted his $100,000 bail late Monday and headed to an iconic McDonald’s in downtown Chicago, social media lit up with reminders of allegations in the documentary “Surviving R. Kelly” that the R&B star would search for teen girls at McDonald’s restaurants.

“He would cruise McDonald’s near high schools and have someone from his team go up to a girl, get her number,” the documentary’s executive producer, Dream Hampton, said during a recent NPR interview. The location where he ate Monday, which used to be known as the Rock-N-Roll McDonald’s, was one of the locations he’d frequent, she said.

There have also been stories over the years about Kelly’s affinity for the ubiquitous burger chain, including when he worked the drive-through window at a St. Louis location after a 2004 performance in that city. And in an interview posted on YouTube, Kelly, who grew up on Chicago’s South Side, recalled going to McDonald’s every morning with his mother, where the two split a coffee and a Danish because that was “all we could afford.”

Footage of Kelly’s Monday night McDonald’s jaunt showed him and his entourage ordering food and eating it in a booth. As they were leaving and Kelly was getting into a van, a female fan yelled, “I love you! I love you! I love you!” Kelly waved. His group later went to a cigar bar in the ritzy Gold Coast neighborhood.

Prosecutors have charged Kelly, 52, with 10 counts of aggravated sexual abuse pertaining to four women, including three who were minors when the abuse allegedly occurred. The alleged abuse dates back as far as 1998 and spanned more than a decade.

Kelly, whose real name is Robert Kelly and who is perhaps best known for the hit “I Believe I Can Fly,” has pleaded not guilty to the new charges and has denied wrongdoing.

Kelly has long been trailed by allegations that he preyed upon underage girls and women and held some as virtual slaves. He was tried and acquitted of child pornography charges in 2008 after prosecutors said a graphic video showed him having sex with a girl as young as 13. He and she both denied they were in the video, even though the picture quality was good and witnesses testified it was them, and she did not take the stand.

A lawyer for two accusers in the current case against Kelly says he secured two videos of the singer having sex with an underage girl or girls and turned them over to the authorities.