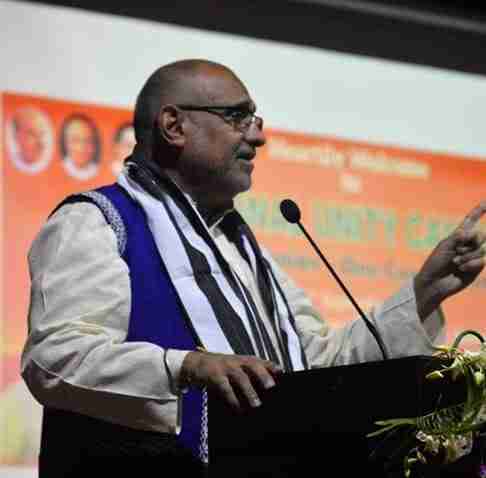 As Hindu nationalism rises in India, the country’s Muslims are being targeted.

Danish Ali was returning home from a local missionary trip when a Hindu mob tried to burn the 21-year old alive. His beard half burned, the police stopped the intended petrol bath a month ago, but have kept Ali in isolation ever since.

Prime Minister Narendra Modi has expanded Hindu nationalist policies for months, which frequently have sharpened the growing division between Hindus and Muslims. Now, Muslims are facing increased attacks after members of an Islamic missionary group, Tablighi Jamaat and of which Ali is a member, tested positive for COVID-19.

By the first week of April, following Modi’s announced lockdown on March 24, nearly one-third of the 4,400 positive cases were members of Tablighi Jamaat.

Authorities charged members of the missionary group, including its chief, Muhammad Saad Khandavi, with defying lockdown orders and participating in public gatherings. As early as March, police charged the Jamaat of holding a congregation in Delhi, which the group has denied. Now Chief Muhammad Saad faces a charge of manslaughter while other group members have been criminally charged for holding religious gatherings.

The police have pressed false charges against the Tablighi Jamaat chief, said advocate Fuzail Ahmad Ayyub. “We have not violated the lockdown orders and have rather complied with the law. We shut down our activities at the Jamaat center in Delhi before the lockdown was enforced in the country,” he said. “The charges of culpable homicide not amounting to murder are baseless.”

Charges against the Tablighi Jamaat members were for violating the orders of a ban against public gatherings and the enforcement of a strict lockdown, said Indian police officer Anil Mittal, which has “helped us stave off a crisis” and contain the disease.

“We have acted against all those people whom we found to be violating the lockdown orders,” said Mittal.

In the aftermath of police charges against Jamaat members, several videos have trended on social media accusing Muslims of living an unclean life and contaminating vegetables with the virus to spread it among Hindus. Fact-checking website Boomlive.in, however, has described many videos, including one of a congregational prayer being held by Muslims in violation of lockdown orders and another of a Hindu woman being assaulted in the Indian state of Kerala, as fake.

Ali, a member of Jamaat, had just returned from his missionary work from the Indian state of Madhya Pradesh when several people assaulted him near his village, accusing him of spreading COVID-19. As he climbed out of a vehicle to head home to his village of Harewali, located in the outskirts of Delhi, a group of Hindus from the same village confronted him. They hit Ali with bamboo stick and punched him, injuring him in the head and leg. As the assault unfolded, one of his attackers shot video and distributed it across social networking platforms, saying Ali was responsible for spreading the disease.

“I am scared, and my family members could be harmed by the same people who have assaulted me. I am under quarantine and have been told by my parents that Hindus throng our house and jeer at us saying that the case against those who attacked me is weak,” said Ali.

Police have arrested three people for the attack, said Mittal.

Ali said he has identified at least 8 people who attacked him and sees the assault “as part of the campaign to attack Muslims in India.”

Also concerned about the online campaign against Muslims is Saiful Islam, a Delhi resident. “Much of it is also to be blamed on the media, which is running a false propaganda and now the hash tags like Corona Jihad are spurring hate campaign against the Muslims,” he said. The outbreak of the disease in the country sent the Islamophobic hashtag Corona Jihad trending on Twitter.

Others attribute the tensions to India’s history of “clash of interests between Hindus and Muslims,” said Vinay Sahasrabbudhe, an Indian lawmaker. “At times things get flared up and acquire communal overtones as right after independence the interests of Hindus and Muslims have clashed.” He said the division between the two religious groups is even in the citizenship amendment, but “law was necessary.”

Turning to the Kashmir and Jammu region soon after being elected, Modi enforced a communal blackout, including blocking the internet and phone services for months until revoking the region’s special status in August. The Kashmir region, a Muslim-dominated state, had governing authority since 1949.

Then, India’s Supreme Court ruled in November that a Hindu temple could be built where a mosque was demolished by Hindu rioters in 1992 in Ayodhya, located southeast of Delhi in Uttar Pradesh. The riots had led to the death of 2,000 people.

The government passed the Citizenship Amendment Act in December, which fast-tracks citizenship for Hindu, Sikh and Christian migrants from Pakistan, Bangladesh and Afghanistan, but leaves out Muslims. Street protests against the exclusion have proliferated for months with recent warnings by the government to clear the roads.

The last major clash between Muslims and Hindus left 53 people dead in northeast Delhi in February, as each side blamed the other for instigating violence.

Muslims have faced discrimination and are being treated badly in the pandemic, said Zafar-ul-Islam Khan, head of the Delhi Minority Commission. India was already seeing cases of COVID-19 being reported from different places “under a well-planned conspiracy,” said Khan.  Muslims were targeted and at least “20 mosques were damaged” in the month of February in riots in northeast Delhi.

Attacks on Muslims were because of Hindu “bigotry,” said Khan. “The violence against the Muslims is being unleashed to earn political mileage.”

Khan thanked Kuwait for standing with Muslims, and said the “politics of hate will only leave Indian Muslims alienated.” The police have charged Khan with sedition for his tweets.

International organizations have also spoken out. India needs to take steps to protect the rights of Muslim minority and to prevent incidents of “Islamophobia,” said the Organization of Islamic Cooperation, an international Muslim group.

The ruling party disagrees. Those who have been propagating the “divisive politics” have done so “with an aim to cause a greatest disservice to the humanity,” said the party’s vice president, Avinash Rai Khanna. “I don’t think the Muslims are being attacked in India. It is only those who want to propagate hate politics and are not good humans who stand to benefit from polarizing people,” he said.

When British rule ended in 1947, India’s bloody history of partition began with 2 million deaths as the separate Muslim country of Pakistan was created. Today about 200 million Muslims make up 14% of India while the Hindu majority make up about 80%.

Meanwhile, more than 106,000 people have tested positive for COVID-19 throughout the country with 3,302 deaths.

Next post VIDEO: Donald Trump Jr. set his sights on big tech months before his father’s feud with Twitter

Previous post ‘Live Aid’ for gaming: How gamers came together to fight coronavirus