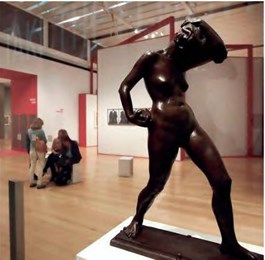 BOSTON (AP) – Boston’s regal Museum of Fine Arts, home to some of humanity’s greatest artworks, is scrambling to make amends.

Last spring, the world-class museum was accused of racism after black middle school students said they were harangued and mistreated on a class trip by other museum patrons and a staff member who allegedly told the children:

“No food, no drink and no watermelon.”

It might have ended there. But in this city still scarred by court-ordered desegregation and the turbulent busing of minority students to white suburbs in the 1970s, the museum – which welcomes 1.2 million visitors each year – took it as a wakeup call to get “woke.”

It has created a new position, senior director of inclusion, in an effort to become a more deliberately diverse organization. In a nod to the need for greater gender equity, it has given over an entire wing to female artists in “Women Take the Floor,”

an exhibition timed to coincide with next year’s centennial of U.S. women winning the right to vote. And this month, for the first time, it will open its doors for free to celebrate Indigenous Peoples’ Day.

It’s also been using its website to keep the public updated on its efforts to make things right.

“It’s not a secret that this museum doesn’t serve folks who are black and brown,”

said Makeeba McCreary, the MFA’s chief of learning and community engagement, who’s been holding a series of roundtable discussions on inclusion and racial diversity. “We know enough to know that’s not who we want to be.”

Much like the fine arts world as a whole, the MFA largely has been a male bastion of wealth and whiteness since its founding in 1870, five years after the end of the Civil War left the nation raw and riven.

As its 150th anniversary in 2020 approaches, the venerable museum _ one of America’s oldest, holding half a million prominent works _ has been confronting its blind spots. They were painfully laid bare during last May’s field trip by 26 seventh-graders, all students of color, from the Helen Y. Davis Leadership Academy in Boston’s Dorchester neighborhood.

In addition to the watermelon remark, the school’s principal, Arturo Forrest, said he also heard reports of museum security guards following his students while leaving white pupils alone and that several museum patrons made disparaging remarks. The state launched a separate civil rights investigation in June.

“These young people left the museum feeling disrespected, harassed and targeted because of the color of their skin, and that is unacceptable,” Teitelbaum said.

The Rev. Mariama White-Hammond, a pastor and activist, recalled taking painting classes at the MFA as a little girl in the mid-1980s and feeling out of place.

“The only thing I find shocking is that so many people seem to be shocked,” she said in a commentary for WBUR-FM, Boston’s NPR station. “For white folks, take this as a data point about how little you really know about the experience of people of color in this city.”

The museum says it’s determined to change that.