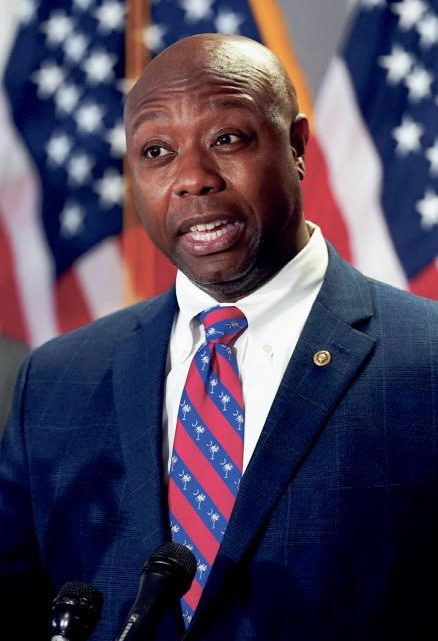 “Hear me clearly: America is not a racist country. It’s backwards to ﬁght discrimination with different types of discrimination, and it’s wrong to try to use our painful past to dishonestly shut down debates in the present,” Tim Scott remarked. Black America did indeed hear him, and after that statement, heard absolutely nothing else. There are several problematic issues that arise from this reoccurring post racist theory that found its roots when Barack Obama was elected president in 2008.

To say that America has reached a pivotal post-racial status in its 414-year history is to acknowledge that the foundation and systems of White supremacy have collapsed and equality for Black Americans and other peoples of color is not just an ideology played out in segregated communities and enclaves across this nation. To say that America has reached past its racist institutional structure and political White power base is to live in a country where Scott is not the only Black Republican in the Senate, and one of only three Black senators currently elected to serve in the Senate. The U.S. Senate ﬁrst assembled on March 4, 1789. In its 232-year history as a legislative branch of government, the U.S. Senate has only welcomed 11 Black Americans out of a total of 1,999 senators. Senators are elected from their respective individual states. Out of 50 states, only seven have elected Black candidates to the Senate. Just seven. Mississippi, Georgia, Illinois, California, South Carolina, Massachusetts, and New Jersey. America declared ofﬁcial independence from Great Britain in 1776, drafting the Constitution in 1787. In America’s 245-year history, there has only been one Black president, and with the 2020 presidential win of Joseph R. Biden, Kamala Harris became this country’s ﬁrst Black vice president. All of this can be considered as progress. But it appears that progress at tortoise’s pace in a socalled post-racial society is a show of how far the country has really come. Or is it?

Scott continued in his rebuttal that he came from a family that raised and picked cotton. Sharecropping. Sharecropping in the South was a legal form of slavery created from White supremacy to oppress Blacks and restrict them from voting rights and equality according to many experts on the subject. “Black Codes” were established that forced former slaves and their descendants into systemic poverty and servitude. Sharecropping sustained the South and the North economically by creating a thread of generational wealth that exists to this day. With generational wealth and corporations profiting from disenfranchised Black bodies, the further encapsulation of Black America under the wheels of systemic racism continued and proliferated generationally. The United States has not granted reparations to the thousands of Black families that suffered under the hard knuckle of sharecropping. Even though Black Americans in the South are no longer chained to contracts forcing hard labor in the ﬁelds, many immigrants are facing the same grueling, insidious, racist practices of the sharecropping system.

To assume that America is now a post-racial society is to infer that the tentacles of White supremacy have been thoroughly amputated. One of the tentacles of White racism is police brutality and Black America. With the conviction of Derek Chauvin in the murder of George Floyd, and the recent shooting deaths of Donte Wright and Andrew Brown, Sr., it is more than evident that Black Americans are the target of what Marvin Gaye once called “trigger happy policing.” Research has shown that Black Americans comprise about 14% of the total American population but make up about 30% of fatalities at the hands of law enforcement. The disproportionate numbers of Black Americans being killed by the police has made police brutality a “public health crisis.” In his speech, Scott relayed that he had drafted legislation that would address police reform, but Democrats rejected it. Scott’s proposed legislation, according to Democrats, shielded law enforcement through qualiﬁed immunity, which prevents police ofﬁcers from personal liability in a civil court. In civil court, restitution is established, even if the criminal justice system fails to convict, accountability is secured. In a post-racial l country, or a non-racist society, this type of legislation and de-bate would not be necessary. But because Black Americans are disproportionately imprisoned and killed by the police, it makes Scott’s reference of America as not a racist country laughable.

On “Face The Nation,” Scott was asked to clarify his post racial comments. He replied, “I’ve been saying for a long time: America is not a racist country. The question is, is there a lingering effect after a couple of centuries of racism and discrimination in this nation. The answer is absolutely.” What he is implying is that racism is like a bag of stinking, rotting garbage sitting in a kitchen. Once the garbage is removed, the scent of it lingers. But for the ‘scent’ of racism to linger, wouldn’t it have to be removed ﬁrst? Is America not racist in Scott’s eyes because he was elected to the Senate, the ﬁrst Black man to win such an honor in his state? Does not the Confederate Flag still wave proudly in The Citadel chapel in Charleston? Sen. Lindsay Graham, in a townhall discussion in 2020 in South Carolina, asked rhetorically “Do I believe our cops are systemically racist? No. Do I believe South Carolina is a racist state? If you’re a young, African American or an immigrant, you can go anywhere in this state [politically], you just need to be conservative, not liberal…you just have to share our values.” What is wrong with being a liberal? Liberals are noted for their progressive activism in civil and human rights. Many Liberals support the Black Lives Matter movement and other grassroots organizations. To “share our values” is code for supporting the establishment of White supremacy. Which essentially is what Scott does every time he says that “America is not a racist country.” To perpetuate that myth is crucial to maintaining the structure of White Supremacy. To counter it is to ﬁght against the principles and the foundation on which this country was built. To keep the status quo and the generational wealth flowing easily, White supremacy racism must be allowed to flourish uninhibited and unchallenged. Calling attention to racism, and shining the spotlight on it, is bad for American business and America’s global image. As the world watched the viral video of Derek Chauvin’s nonchalant attitude and his knee comfortably snuff the life from George Floyd’s body, it gasped. How could such a beacon of hope such as America continue to stoically embrace racism, while pointing the ﬁnger at other countries for human rights violations? It is obvious that Scott is on board with the thinking of Lindsay Graham. To play in the high stake’s world of politics, Scott seems more than willing to betray Black America, and Black South Carolinians for 30 pieces of silver…or a seat in the Senate.

Scott could not possibly believe that we live in a post-racist society when he has publicly acknowledged being pulled over by the police for “driving while Black” 18 times.