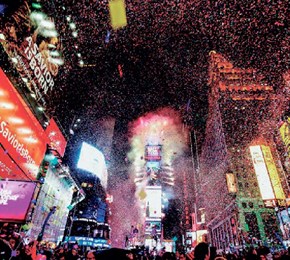 Revelers around the globe are bid a weary farewell Monday to an unsettling year filled with challenges to many of the world’s most basic institutions, including politics, trade, alliances and religion.

In New York City, Snoop Dogg, Sting and Christina Aguilera welcomed 2019 in a packed Times Square along with revelers from around the world who came to see the traditional crystal ball drop. The celebration took place under tight security, with partygoers checked for weapons and then herded into pens, ringed by metal barricades, where they waited for the stroke of midnight.

U.N. Secretary-General Antonio Guterres issued a bleak New Year’s message that called climate change an existential threat and warned that “it’s time to seize our last best chance.” He noted growing intolerance, geo-political divisions and inequality, resulting in people “questioning a world in which a handful of people hold the same wealth as half of humanity.”

Next post The season for savings? Sales say it isn’t necessarily over quite yet