Silent movie shot in Tampa was supposed to combat racism 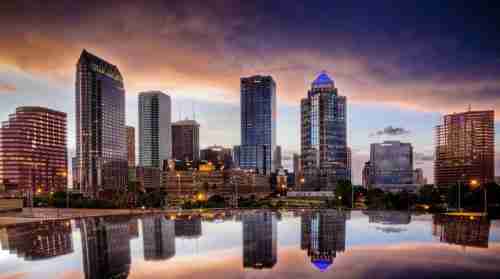 TAMPA, Fla. (AP) – Local residents appeared as extras in epic scenes set in ancient Egypt and the Biblical Garden of Paradise. Newspaper ads promised would-be financiers a 10 to 1 return if they invested in the film.

The producers of The Birth of a Race hailed the silent movie shot in Tampa more than a century ago as the next great cinematic achievement, one they said would improve race relations.

It was a major bust. Following its premiere in Chicago 100 years ago this December, it failed at the box office, was roasted by critics and did nothing to ease racial tension. In fact, when the movie screened in Tampa the next year, black residents – including hundreds who were extras – were banned from the segregated theater.

Today, most of the nearly two-hour film is lost. The 10 minutes of footage still remaining is housed at the Library of Congress.

“We’re lucky that much exists,” said Fred Hearns, a local historian of African American history. “That film is an important part of the country’s story. Tampa is a big part of it. To understand why it matters, you have to go back to 1915.”

That was the year the silent movie Birth of a Nation was released. Directed by D. W. Griffith, it is considered the first blockbuster movie feature. Ticket sales were estimated at $50 million.

The film also denigrated African Americans and romanticized the Ku Klux Klan. Historians credit Birth of a Nation with helping to rebuild that racist organization.

Set in the years immediately following the Civil War, Birth of a Nation depicts a South overrun with corrupt northerners and evil and buffoonish freed slaves portrayed by white actors in black face. The KKK then rides to the rescue and brings peace to the South.

“It was the first American epic film,” said Andrew Huse, a librarian with the University of South Florida Special Collections Department. “A lot of people who didn’t originally subscribe to the ideas of the movie were impressionable. So they were willing to believe the narrative.

The KKK, which had been dormant since the end of the Civil War, rose again.

“Suddenly the Klan was even booming in places like Illinois,” Huse said. “And that wasn’t even part of its territory before.”

Birth of a Race, directed by John W. Noble, was proposed as the cinematic answer to Birth of a Nation. The plot was to run from Biblical times through World War I and show the advancements and contributions of black people.

Scenes shot locally in January 1918 included an Egyptian chariot race, Jesus carrying his cross toward crucifixion and baby Moses being rescued from the river.

“The Bayshore, before all the development, was the Red Sea,” historian Hearns said.

News stories from that month tell of carpenters erecting a room mimicking the one that hosted the signing of the Declaration of Independence.

“You could make an argument that Birth of a Race was the most significant film ever made in Tampa. What an extraordinary story that during the racially fraught era of the Great War, that investors and artists could possibly finance and complete a film to challenge Birth of a Nation.”

But by leaning heavily on a plot about two white brothers fighting on opposite sides of World War I, investors pushed the scope of the movie away from race relations and toward themes of patriotism and universal brotherhood.

Critics called the final product a disjointed story that did not fulfill its purpose. Worse, critics noted, a war-weary country did not want to watch a movie about war.

“As happens with flops, it was forgotten for a long time,” librarian Huse said.

“The footage all rotted away.”

What remains of the movie showcases its initial intent, Hearns said. There is a scene in which a white Jesus falls and drops a cross and a black man helps him to his feet. Another shows a white and black farmer working together in a field.

Their farm clothes then change to military uniforms and they march toward the camera.

“It showed that blacks and whites need to come together,” Hearns said. “It is a powerful scene and thank God it was saved. I wish we could see the rest of the movie.”