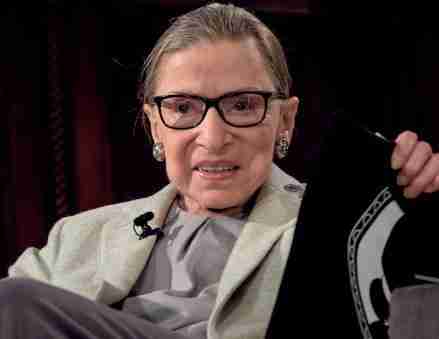 Washington (AP) — The prospect that President Donald Trump and Senate Republicans will ﬁll Justice Ruth Bader Ginsburg’s Supreme Court seat before the year is out has ignited a call for major changes on the court, including expanding the number of justices.

Some Democratic senators, who had been averse to increasing the size of the nine-member court, said in the wake of Ginsburg’s death that the Republican rush to ﬁll the high court vacancy could be a breaking point.

Massachusetts Sen. Ed Markey said on Twitter that if Republicans don’t allow the winner of the Nov. 3 presidential election to select the next justice, “we must abolish the ﬁlibuster and expand the Supreme Court.”

But the sudden vacancy also is fueling tensions among Democrats. While some progressives are urging presidential nominee Joe Biden to embrace reforms including adding justices to the court, he has so far resisted embracing such a major change.

Biden, who ran a relatively centrist primary campaign and spent 36 years in the Senate, is concerned that such moves would worsen divisions during a particularly polarized moment in American history.

Another worry is that changing the size of the court for the ﬁrst time in 150 years would come back to bite the Democrats, leading to further expansion when Republicans next control both Congress and the White House. Faced with a 6-3 conservative court as the new year begins, Democrats would need to add four seats to overcome the Republicans’ edge. With a 15-justice court, just two more additions by the Republicans would solidify their advantage.

White House press secretary Kayleigh McEnany pushed back against Democratic talk of expanding the court, citing Ginsburg’s own words in a 2019 interview with NPR in which she said ”packing the court was a bad idea when President Franklin Delano Roosevelt tried it and I’m not in favor of all of that.”

Democrats said almost nothing about the Supreme Court at their convention in August. That changed in an instant over the weekend.

“Nothing is off the table” for Senate rules changes if Republicans quickly conﬁrm a new justice, Senate Democratic leader Chuck Schumer of New York warned in a conference call Saturday with Democratic senators, according to a person on the private call who was not authorized to discuss it publicly and spoke on condition of anonymity.

If Democrats win control of the Senate in the November elections, they probably would need to get rid of the ﬁlibuster, the Senate rule that requires 60 votes rather than a simple majority for most legislation, before they could move on legislative changes that might include the size of the court.

For now at least, Biden is spurning talk of court expansion, dubbed “court packing” by its opponents, although the Democratic platform does include support for amorphous “structural court reforms to increase transparency and accountability.”

Biden believes such a major change would only contribute to further “escalation” surrounding the courts, said a top Biden aide granted anonymity to speak about internal conversations.

In the Democratic primaries, Biden prevailed over candidates who supported big changes for the court, including former South Bend, Indiana, Mayor Pete Buttigieg.

Buttigieg proposed expanding the high court to 15, but not simply by allowing the sitting president to amplify his or her ideology on the bench. His plan would have ﬁve justices preferred by Democrats and ﬁve by Republicans. Those 10 justices then would select their other ﬁve colleagues.

Like Biden, leaders of several progressive groups said their focus is on stopping a Trump nominee. But several said in a conference call this weekend that they’d consider all options if they fail. “Nothing is off the table. The legitimacy of the court and our democracy is at stake,” said Vanita Gupta, president of the Leadership Conference on Civil and Human Rights.

It’s been more than 80 years since expanding the size of the court has received serious discussion. In 1937, Roosevelt tried and failed to add seats to a court on which aging conservative justices had struck down several New Deal programs. Roosevelt lost the ﬁght in Congress over court expansion, though retirements soon eliminated FDR’s need for legislation.

One of the attractions of court expansion is that it does not require amending the Constitution, as imposing term limits on justices might.

The court’s size can be changed by legislation. The number of seats varied during its ﬁrst 80 years from a low of six at the time the Constitution took effect in 1789 to a high of 10 during the Civil War. The current tally of nine justices was set in an 1869 law.