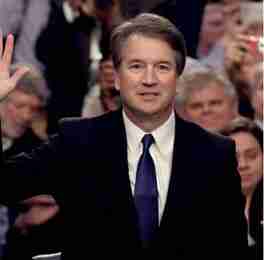 WASHINGTON – America is about to get its first extended look at Supreme Court nominee Brett Kavanaugh in his confirmation hearing before the Senate Judiciary Committee. Viewers just tuning into the battle over the 53-year-old appellate judge’s nomination should expect to see Kavanaugh portrayed by fellow Republicans as a principled jurist who has no preconceived ideas about the law. Democrats will try to paint President Donald Trump’s nominee as a results-oriented conservative who wants to undo abortion rights and generally push the Supreme Court to the right.

Lawmakers know the public is watching, but as the nomination hearing gets going and lawmakers seek to probe the nominee’s views, they often slip into using legal jargon and refer to past Supreme Court cases in shorthand. It can sound as though they’re talking in code. Expect senators to use these terms at Kavanaugh’s hearing, starting Tuesday:

Roe v. Wade, Planned Parenthood v. Casey – These cases from 1973 and 1992, respectively, are the two main decisions on abortion rights. Kavanaugh has not said whether he believes they were decided correctly, and he’s not likely to do so during the hearings. But he is certain to be asked repeatedly about abortion, Roe and Casey.

He has provided two recent clues to his views, in the form of a speech that praised the late Chief Justice William Rehnquist’s dissent in Roe and Kavanaugh’s own dissenting opinion that would have denied immediate access to an abortion for an immigrant teen in federal custody.

Stare decisis – Latin for to stand by things decided. It’s the legal principle that judges use to base decisions on earlier ones. When it comes up at confirmation hearings, it’s often in reference to abortion rights and it’s usually a way of asking if a nominee will overturn certain decisions _ like Roe v. Wade. Nominees invariably invoke stare decisis, or refer to something as settled law, to try to reassure senators that they have great respect for Supreme Court precedents, without committing to preserve any specific one. Respect for precedent, however, has its limits. Last term, the court squarely overturned three precedents.

Chevron deference – A 1984 Supreme Court ruling, in a case involving the Chevron oil company, says that when laws aren’t crystal clear, federal agencies should be allowed to fill in the details.

That’s what agencies do _ on environmental regulations, workplace standards, consumer protections and even immigration law. But a growing conservative legal movement has questioned the Chevron decision. Kavanaugh has expressed some support for limiting agencies’ discretion, as have several conservative justices. If a future Supreme Court were to limit the Chevron ruling, it would mark a big change in the law that would potentially make it harder to sustain governmental regulations.

Recusal – A judge’s decision to not take part in a case, usually because he participated in it at an earlier stage, or has a financial or personal conflict. Democrats are going to press Kavanaugh to pledge to recuse himself if a case comes to the court involving Trump and special counsel Robert Mueller’s Russia investigation. He is not likely to commit to do so.

Kavanaugh has written judicial opinions and law review articles that suggest he supports the idea that a president may decline to enforce a law he believes is unconstitutional. Questioners also may focus on Kavanaugh’s service in the White House under George W. Bush, who used signing statements to legislation that his administration saw as unreasonable or unconstitutional limits on executive power.

Subpoena – a legal order requiring a person to testify as a witness, it sometime also requires a person to turn over documents or other records under their control. Kavanaugh should expect to be asked whether the president can be subpoenaed, an open legal question that could reach the Supreme Court if Mueller tries to force the president to testify as part of the Russia investigation. Also an open question: Whether the president can be indicted, meaning charged with a crime.

Affirmative action – The term for efforts to improve opportunities for minorities, generally in employment and college admissions. It’s a standard topic for Supreme Court confirmation hearings, particularly after a 2003 Supreme Court decision that predicted affirmative action wouldn’t be necessary in 25 years.

Senators may bring up a comment Kavanaugh made in 1999 about a different Supreme Court case, saying he believed it was “one more step along the way in what I see as an inevitable conclusion within the next 10 to 20 years when the court says we are all one race in the eyes of government.”

Balls and strikes – OK, that’s not a legal term, but it will come up anyway. Chief Justice John Roberts famously compared judges to umpires during his 2005 confirmation hearing, saying neither makes the rules, but rather both just apply them. He said he’d remember if confirmed that his job is “to call balls and strikes.” Lawmakers love to ask nominees about this analogy.

“Let him answer the question” – Again, not a legal term. Expect Senate Judiciary Chairman Chuck Grassley, or the Republican sitting in his place, to interject when Democrats’ questioning of Kavanaugh gets especially heated, or they try to cut in if they feel Kavanaugh is trying to filibuster. Question time is limited and senators often feel free to jump in to move the questioning along.

Next post Candidate Gillum tells opponent to focus on issues, not insults