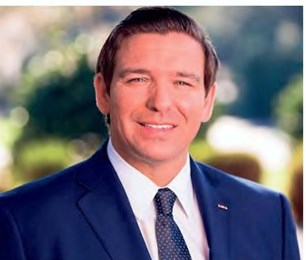 Earlier this year, the Mueller Report referenced at least one Florida county where election systems were infiltrated by Russian hackers. Gov. Ron DeSantis later confirmed that at least two counties were hacked, but no data was compromised.

“This is a very real threat to Florida,” Secretary of State Laurel Lee told reporters. “Every single day, domestic actors and foreign actors attempt to penetrate our Department of State networks and the networks of supervisors of elections around our state.”

During her appearance before the media gathered for a Capitol news event organized by The Associated Press, Lee came under intense questioning by reporters to elaborate on her agency’s review of elections security across the state’s 67 counties.

But Lee mostly sidestepped questions about what that review revealed.

With Florida’s history of troubles at the ballot box, Lee acknowledged the widespread concern, particularly because of its critical role in next year’s presidential elections. Florida’s 29 electoral votes is the biggest prize among a handful of battleground states that are expected to decide the 2020 presidential election.

“I know Florida will be under great scrutiny when it comes to elections and elections security,” she said.

On Friday, U.S. attorneys in Florida will be joining Lee in Tallahassee for a news conference to discuss what they will do as a unified effort to protect the security of Florida’s 2020 elections.”

The state is investing millions of dollars to beef up elections security, including providing $15.5 million in grants to local jurisdictions and $1.9 million to install network monitoring systems. The Secretary of State’s Office is also planning to request another $1.3 million to establish a cybersecurity bureau.

Earlier this year, DeSantis ordered the Secretary of State’s Office to conduct a statewide review of elections security.

Lee, who was appointed by the governor, said the review was complete and that her agency is working with county-run elections offices across the country’s third-most populous state”to address any weaknesses or vulnerabilities that have been identified in advance of the 2020 election cycle.”

But what those weaknesses and vulnerabilities were, she wouldn’t describe. Without providing details, Lee insisted that the integrity of the state’s voting systems remains intact.

Even so, concerns about the state’s election infrastructure remain, especially because of the ongoing mystery over which Florida counties were infiltrated by Russian hackers, even if no apparent harm was done.

“We still don’t know what happened and how to prevent it in the future,”

said Ion Sancho, who retired as elections supervisor for Leon County after the November 2016 elections. He said federal officials should reveal the identities of the hacked counties.

Some elected officials, including Florida’s governor and some members of Congress, were briefed on the matter but were prohibited from identifying the counties.

Rep. Stephanie Murphy, a Democrat from the Orlando area, has been especially vocal about transparency on the matter. She, too, has been forbidden from disclosing the counties that were breached.

“Our country has a target on its back, and Florida election officials and voters are the bullseye,” Murphy said.”So we better be doing everything within our power, at every level of government, to address the threat.”