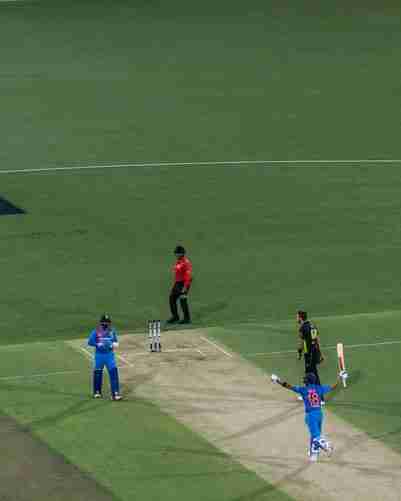 However, the championship, which has eight teams representing different Indian cities, is being held in Abu Dhabi rather than on home turf. Another departure from the regular routine is that there was no opening ceremony when the tournament started on Sept. 19.

IPL had to be shifted to Abu Dhabi this year as the number of Covid-19 cases continued to rise exponentially in India, with 6 million cases recorded as of Sept. 28.

Cricket is very popular in India, with international players enjoying the same adulation as Bollywood stars. (Some Bollywood actors, including Shah Rukh Khan, own IPL teams.)

Despite scandals in the past, cricket this year is providing a distraction from the gloom of the pandemic.

“This will be the most-watched sports event,” said Boria Majumdar, sports journalist and writer. “With the soaring number of Covid-19 cases in India, people are desperate for optimism and positivity. The IPL generates that.”

There is also hope for a new winner this year.

Aakash Chopra, a former Indian cricketer who also played for KKR, said Delhi Capitals is a strong team this time.

“Delhi Capitals will have a great year,” he told Zenger News. “Their captain Sreyas Iyer will be great to watch. A team that has never won the tournament might just end up doing so this year.”

India started playing international cricket in 1932 when the country was under British rule. It has consistently taken part in the longer versions of the game — Test matches over five days, and One Day Internationals (ODI), where each team gets 50 overs to bat.

Twenty20, often called T20, is the shortest format of the game, with each side getting to bat for 20 overs. (Each over has six balls.) A typical game lasts about three hours — the short time frame has made it more popular than the longer formats.

“IPL is bigger than the World Cup, at least in terms of TV viewership,” said Majumdar. “In the World Cup, there would be very low viewership for an Afghanistan versus West Indies match. In the IPL, every match has a high viewership.”

“Winning the World Cup is, of course, a different glory,” he said. “But in terms of economics, the IPL is much bigger.”

In the World Cup, competition is among international teams representing nations.

“The IPL is a more bankable proposition for broadcasters compared to the World Cup,” said Majumdar.

For players, too, the IPL — founded by the Board of Control for Cricket in India — is a lucrative option.

“It is very lucrative for individual players,” said Sharda Ugra, a senior editor at ESPNCricinfo. “It has changed the entire economy of cricket. It has changed how cricket is consumed by the viewers.”

This year, he said, IPL will be markedly different.

The biggest challenge players will face is playing in an empty stadium since no spectators are allowed during the pandemic. Cheering noises will be played in the background, much like the case in major sporting events in the United States.

“They enjoy the crowd, they like to keep the fans on their toes,” said Ugra. “But once they start playing, they do not bother much about the crowd. Sachin Tendulkar used to say that when he was in the dugout, he could hear the crowd, but when he went out to bat it was background noise.”

Tendulkar, considered one of the best batsmen in the history of cricket, played for India from 1989 to 2013, an unusually long career. He scored more than 30,000 runs in international cricket.

“The tempo of scoring is different, the condition for the bowlers are different,” he said. “It will be not a batsmen-focused IPL. There is a chance for the bowlers to do well. We will not be seeing such big scores like we do normally, except a few games.”

Since its inception, there have been several scandals around IPL as well, the biggest being the 2013 spot match-fixing scandal.

“It derailed Indian cricket; it changed the whole dynamic of the game and it still simmers,” said Majumdar “We saw an overhaul of the administration, teams were suspended.”

But IPL has made a strong comeback — especially this year as a diversion from the widespread pandemic.