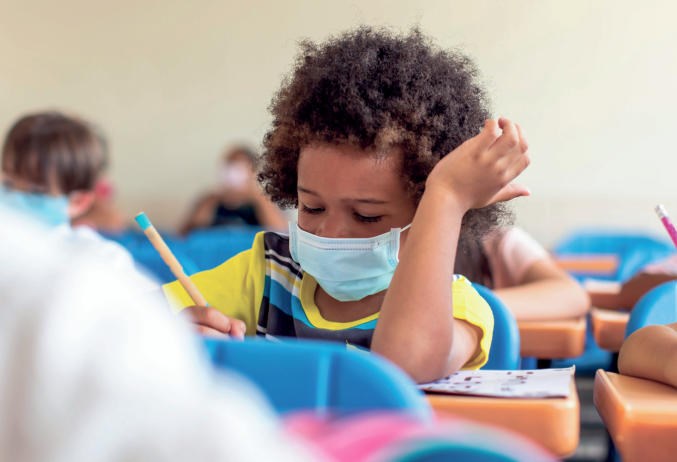 Florida Education Commissioner Richard Corcoran announced Monday that the State Board of Education has withheld the salaries of school board members in the counties of Broward and Alachua due to their rejection of the Florida Department of Health Emergency Rule that prohibits the requirement of mandatory mask wearing for students.

Under the Protocols for Controlling Covid-19 in School Settings “which conforms to Executive Order Number 21-175” Ensuring Parents’ Freedom to Choose – Masks in Schools, enacted July 30 by Gov. Ron DeSantis, school districts are prohibited from issuing mask mandates without an option for parents to opt out of the requirement. State ofﬁcials said the emergency rule was put in place to “not violate Floridians’ constitutional freedoms” and to “protect children with disabilities or health conditions who would be harmed by certain protocols, such as masking requirements.”

As school districts across the state prepared to reopen for the 20212022 school year, the Delta variant became the primary virus which overtook Florida and other southern states, due in part to low vaccination rates amongst the adult population. Vaccine approval for children between the ages of 12 years old and under is still on the horizon with some reports stating that the FDA could issue an emergency approval by the end of the year.

But with the re-opening of schools and the well-being of students, teachers, and other administrators on the line, school board ofﬁcials across Florida found themselves in a conundrum between Tallahassee and their local districts due to the rising COVID-19 cases and hospitalizations, especially the critical cases of children contracting the virus. According to the U.S. Department of Health and Human Services, 224 children are currently hospitalized in the state due to the coronavirus Delta variant, the highest recorded number since the beginning of the pandemic. On July there were reportedly 20 children admitted to Florida hospitals suffering from covid. A month later on August 1 the U.S. Department of Health and Human Services reported that number had risen by 505% with the total being 224 as of August 30. School ofﬁcials following the recommendations as drafted and coordinated by the Centers for Disease Control and the American Academy of Pediatricians took into consideration the possible adverse effects and unique challenges that a full school year of brick-and-mortar learning could present amid a raging pandemic. Dr. Raul Pino of the Orange County Department of Health in a news conference on Monday told reporters that children “make up the largest group of new cases.” Children between the ages of 5-14 make up 19% of all new covid cases. “Yes, there has been an increase in children hospitalized,” Pino said. “This is not the same pandemic we had before where younger individuals tend to do better.”

Broward and Alachua, the ﬁrst counties to defy DeSantis’ ban, were sanctioned on Aug.17 by the State Board of Education, which decidedly voted to “take all legal steps” against said school districts for violating the Ensuring Parents’ Freedom to Choose order. Board Chair Tom Grady stated at the time that some of those “legal steps” for defying the order could be “withholding funds from the district” and /or “removing school board ofﬁcers,” audits on how school ﬁnances are dispersed, and other “potential investigations and penalties.” Corcoran said in a statement Monday that the school districts had “implemented a mandatory face mask police that violated parental rights by not allowing a parent or legal guardian to opt-out their child.” The penalty is slated to proceed until each offending school district complies.

The move by the Florida Department of Education to withhold the salaries of school board members comes on the heels of the court ruling Friday that basically “knocked down” the governor’s order. Leon County Circuit Judge John C. Cooper said in his online ruling after a four-day trial that DeSantis’ “actions” and order “do not pass constitutional muster.” Cooper said that “they seek to deprive the school boards in advance.” The judge further outlined that school districts can “impose mandatory mask mandates on students and staff” and the state “has to give due process and allow (school districts) to show that their mandatory mask mandates are reasonable.” Noting that “the Delta variant presents a higher risk of infection to children than the previous” variants, Cooper said “the evidence demonstrates that face mask policies that follow CDC guidance are at this point in time reasonable and consistent with the best scientiﬁc and medical opinion and guidance in the country.” The governor’s ofﬁce responded to the ruling in a statement that “it’s not surprising that Judge Cooper would rule against parents’ rights and their ability to make the best educational and medical, decisions for their family, but instead rule in favor of elected politicians.” Cooper said that he would also issue an injunction that would block the Department of Education from “penalizing schools for mask mandates.” DeSantis told a crowd in Jacksonville on Monday that he would appeal the decision. “I think we’re gonna have really good grounds to appeal in terms of the ﬁrst District Court of Appeal,” DeSantis said. “At the end of the day, what the parents Bill of Rights requires, in our judgment, is that parents be given the right to opt out, if they think that’s in the best interest of their kids.”

In lieu of this new development, Broward and Alachua counties could see the intervention of the Biden Administration. White House Press Secretary Jen Psaki said last month that the administration is “continuing to look for ways” that the U.S. government can “support districts and schools as they try to follow the science.” One of those methods could be the distribution of unspent coronavirus relief money which DeSantis spokeswoman Taryn Fenske told the Washington Post in an email that the governor strongly opposes saying “it is surprising that the White House would rather spend money for the salaries of bureaucratic superintendents and elected politicians, who don’t believe that parents have a right to choose what’s best for their children, than on Florida’s students, which is what these funds should be used for.” As the back-andforth continues between Washington and Tallahassee, the fact remains that children in Florida are contracting the coronavirus Delta variant at steadily alarming rates. Pino warned Monday that “the message to everyone that is young or anyone who has a young member in the family that thinks this (COVID-19) is a walk in the park – this is not a walk in the park.”