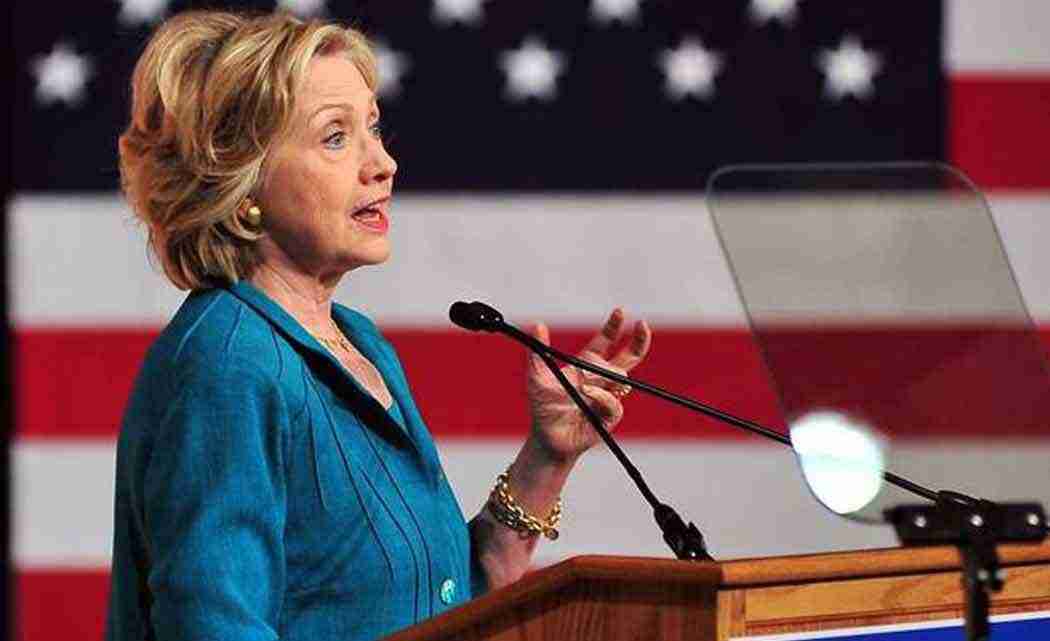 MIAMI — Drawing a sharp distinction with Republican rivals in the pivotal election state of Florida, Hillary Rodham Clinton on Friday called on the GOP-run Congress to end the trade embargo the U.S. has imposed on Cuba since 1962

The Democratic presidential favorite said an opened economic relationship would bring “dignity and democracy” faster than continuing the hardline isolationism sustained through five decades of Republican and Democratic administrations, including her husband’s two terms.

President Barack Obama has normalized diplomatic relations with Cuba and made it easier for Cuban-Americans to visit and send money to families on the island. He also has called for Congress to lift the economic embargo.

Clinton said that if Congress did not act, with her as president, she would use executive authority to allow American businesses, individuals, universities and not-for-profit organizations an easier path to engage in Cuba.

Alluding to her time as first lady and in the Senate, Clinton acknowledged that she previously supported sanctions, but she told an auditorium of students, faculty and others at Florida International University that she changed her views during four years as Obama’s secretary of state. During that time, there also has been a softening of public opinion among the million-plus Cuban-Americans who hold considerable sway in Florida voting.

Clinton accused Republican presidential candidates – without calling them by name – of approaching Cuba and Latin America “through a Cold War prism.”

Florida Sen. Marco Rubio and former Florida Gov. Jeb Bush have been among the most vocal critics of Obama’s decision to establish diplomatic relations with Cuba.

“They have it backwards,” Clinton said. “Engagement is not a gift to the Castros; it’s a threat to the Castros. An American embassy in Havana isn’t a concession; it’s a beacon. Lifting the embargo doesn’t set back freedom; it advances freedom.”

She continued, “We cannot afford to let out-of-touch, out-of-date, partisan ideas and candidates rip away all the progress we’ve made.”

Bush, who earlier shared a stage with Clinton at a National Urban League conference in nearby Fort Lauderdale, embraced their disagreement, saying it was “insulting to many residents of Miami for Hillary Clinton to come here to endorse a retreat in the struggle for democracy in Cuba.”

Clinton said she is “under no illusion that the regime will end its oppressive ways anytime soon.” She recalled Cuba shooting down two civilian American plans in 1996, damaging her husband’s quiet attempts to forge a better relationship with Fidel Castro. But, Clinton argued, history proves that engagement forces change more quickly than sanctions.

“You’ve been promised progress for 50 years, and we can’t wait any longer for a failed policy to bear fruit,” she told the largely Cuban-American crowd.

U.S.-Cuba relations have long been a flashpoint in Florida politics, and public opinion polls shed light on Clinton’s and the Republicans’ respective approaches.

Guillermo Grenier, a Florida International University professor who attended Clinton’s speech, said hardline politicians still get support from Cuban-Americans who were born in Cuba and fled shortly after Castro’s takeover. That gives Bush and Rubio, whose father fled Cuba, little reason to soften their views in a state Obama won by less than a percentage point in 2012.

“But this population is anything but monolithic,” Grenier added.

Many younger voters – both U.S.-born descendants of exiles and more recent immigrants from Cuba – want improved relations or, at the least, simply don’t decide their votes on that single issue.

“The younger generations are more like any other immigrants – they care about pocketbook issues, jobs, their kids’ educations,” said Florida pollster Fernand Amandi.

Nationally, more than 70 percent of Americana adults support a normal diplomatic and economic relationship with Cuba, though it’s not clear how much the issue drives voters outside the Cuban-American core in south Florida.

Grenier said that forces candidates to give their Cuba positions broader appeal.

Republican talk of “appeasement” fits the GOP’s overall criticism of Obama’s international policy, including his pending nuclear deal with Iran, an argument that appeals to military and foreign affairs hawks.

Clinton, meanwhile, makes what Grenier says is an implicit appeal to non-Cuban Hispanics -another key demographic in Florida and other general election swing states – when she argues that the U.S. position on Cuba has weakened American influence throughout the hemisphere.

“Many Republicans seem to think of Latin America as a land of crime and coups, rather than a place where free markets and free people are thriving,” Clinton said, adding that a dismissive view opens the door for China to assert itself as an economic superpower in the region.

“The United States needs to lead in the Americas,” Clinton said. “If we don’t, make no mistake, others will.”