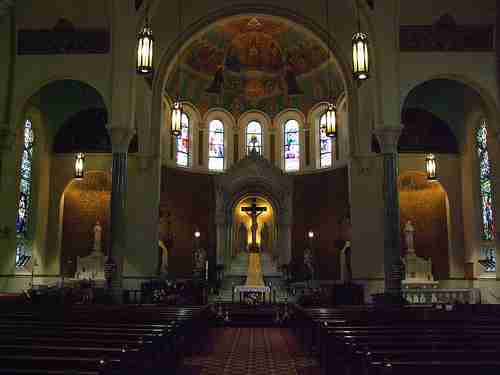 TERRE HAUTE, Ind. (AP) _ Mass readings, prayers, the bulletin, and even the priest’s homily are now just a swipe away for parishioners of a historic downtown Terre Haute church.

St. Benedict Catholic Church _ which is celebrating its sesquicentennial throughout this month _ has signed up for a mobile app that allows it to communicate with church-goers through mobiletechnology. The parish launched the app at weekend masses last week.

Here’s how it works: Parishioners _ or just anyone interested _ can download the free app myParish to Apple or Android phones or by visiting myparishapp.com. When the download is complete, the app will ask the user to do a name search for the church he or she wishes to follow. Upon making the selection, the user can access various information about the church and any other resources the parish leaders have made available.

The Rev. Martin Day, pastor of St. Benedict, told the Tribune-Star that he is even posting his homilies on the app. St. Benedict has made available on the app the bulletin, calendar of events, readings, full text of common prayers, mass and confession times and a link for online donations. It also notifies people if there are any special messages from the church.

“It makes things so much more accessible to people,” Day said.

While St. Benedict plans to keep using its traditional ways of reaching parishioners, such as the Sunday bulletin, the new app offers another opportunity. “This is another avenue to communicate with parishioners who are tied to their phone as opposed to … reading something in print” such as the bulletin, he added.

In addition to this important reminder, parishioner Linda Gorrell told the Tribune-Star that the app “has all the information that you need.” It can even notify people if Mass has been canceled, she said.

Gorrell’s Android phone now has a sticker that says, “I’m not texting. I’m praying,” which was previously distributed at church. “I love it,” she said of the app. “I love the fact that it has the daily readings” and other reminders, she added. “The daily readings, I like that a lot. I use that every day.”

A lector at the church, she said she used the app on the way to church to access the readings and practice her role.

One long-time parishioner, Liz Gawlik, said she has been using the app for a week, for various reasons including checking parish event times. Because she plans to volunteer at the church more, she has also used it to look up who is in charge of the various church activities and committees. She has encountered no issues while using the app, so far, she said.

Gawlik adds that the biggest advantage of the app is that it notifies her of “what’s going on” at her parish. “I think it’s great because it’s a way of keeping connected with the parish and the community of the church,” she said.

Other local churches have been using mobile technology to connect with members.

One east side church, Maryland Community Church, offers the “MCC Mobile App,” which can be downloaded for Windows phones, from the Android Market or on iTunes. With it, members can listen to and watch previous sermons, read the Bible, see announcements and access pastor blogs, share sermons with Twitter, Facebook or email, and donate to the church with phones or tablets, its website stated.

In addition to St. Benedict Parish and Maryland Community Church, area churches including the Terre Haute First Baptist Church, Annunciation Catholic Church in Brazil, among others, also have mobile apps available for download.

It’s all about connectivity.

Gorrell said that the St. Benedict app’s “coolest feature” is the connection it allows for both the church and its members, especially the younger generation.

“If we continue to do things like this,” it might help kids and young adults understand one important thing, she said, “We’re pretty cool, too.”

Next post The Latest: MJ good picking uniforms. Players? Not so much.