Drone designed to appeal to youngsters in the classroom 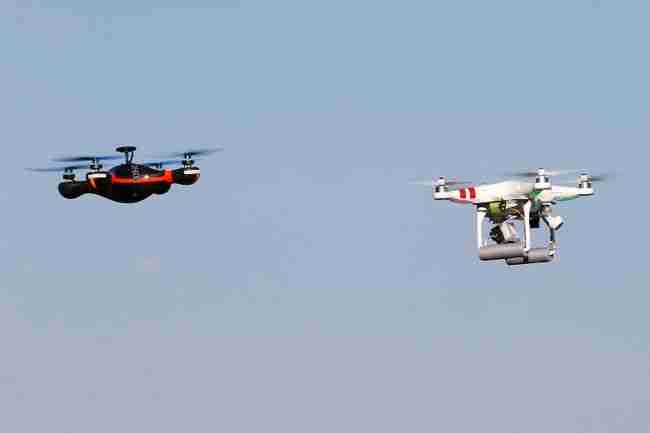 “This is the future,” she marvels.

In her heyday in the 1950s, Bartlett was one of the first female bankers in Nevada. Through her work at First Interstate Bank, she has been credited with helping to grow Henderson into the community it is today. So it’s fitting that she has invested in the fledgling company.

A longtime friend of the UNLV engineering department, she bought 20 Eedus for students in the university’s unmanned aerial systems program.

At about a third of the size of Skyworks’ advanced Qua.R.K quadcopter, the Eedu is designed to be simple enough for anyone to use.

This month, Skyworks launched a Kickstarter page to fund development of the drone. Around $450 gets you an Eedu as well as open-source software that allows users to program the drone’s computer.

“Our goal is to get our product adopted in classrooms and with hobbyists,” said company CEO Greg Friesmuth. “There’s a lot that can be done with this technology, and we want to enable those people to be able to use it.”

Right now, consumer drones are relatively primitive, with the most advanced models capable of supporting simple GoPro cameras. Skyworks has taken another approach, using a drone as a platform to allow the user to do anything they want.

That can be as simple as fitting lasers onto a handful of drones and playing laser tag, or programming sensors that measure soil humidity, air quality and radiation.

“We are trying to find new ways of engaging students,” said Jinger Zeng, cofounder of Skyworks with Friesmuth. “Kids need that kind of hands-on connection.”

Bartlett, an inductee of the Nevada Business Hall of Fame, says the technology is crucial not only to America regaining its place as a technological leader, but for Southern Nevada in diversifying its economy.

“Engineering is very important to me,” she said.

At Bartlett Elementary, the Henderson school named after her, kids can dabble in an afterschool robotics club.

“We need to stay ahead in technology and medicine,” she said. “Otherwise all of the other countries in the world, especially China and India, will be much further ahead than we are. We need to keep up with them.”

Eventually, the company wants to refine Eedu to be safe enough for kids in elementary school. In its present form, the drone is best suited to high school and college students.

In its final retail form, the drone is expected to cost around $600.