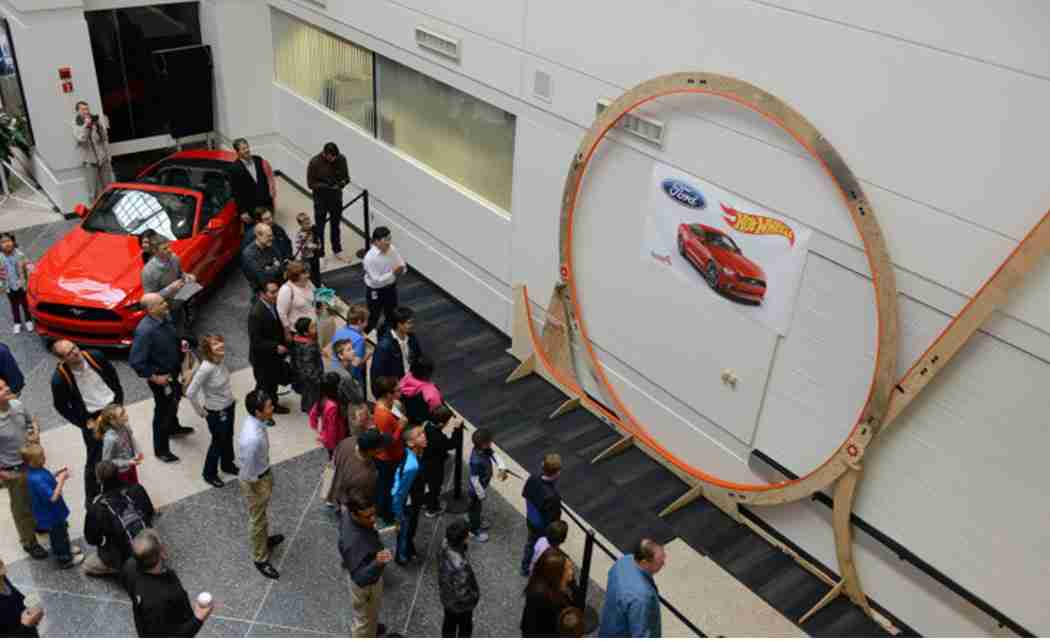 DEARBORN, Mich. (AP) _ The straightaway begins on the third floor and drops more than 30 feet toward a giant, world record-sized loop that entices anyone who ever played with a Hot Wheels race set to give it a try.

And when that car remains on the orange track as it zooms down and completes the 12 1/2 foot loop before it’s sent flying, it creates a surge of excitement only the kid in all of us could understand.

To Hot Wheels fans, Matt West of Monroe is a genius; he created what most boys could only dream about: a world record loop.

“It turns everybody into a 12-year-old,” West told the Monroe News ( http://bit.ly/1Fwz5y0 ). “Everybody wants to test a car. It unleashes the imagination.”

Inside the Research and Innovation Center on Ford‘s sprawling campus in Dearborn, West and a team of 10 built The Big Loop. Sure it’s a toy, but in order for it to be successful he applied physics and had to calculate the proper speeds and height ratios that were combined with precise angles. Otherwise the cars would simply crash.

West, 33, is a dynamometer technician and a budding engineer who’s been working on the project for two years. He and his 6-year-old son, Blade, began tinkering with loops at their home until he began wondering about a world-record loop.

“There’s got to be a record,” he said. “There are records for everything.”

Sure enough, in 2013 someone created a world record loop of 9 feet 3 inches. And, of course, in order for it to be official a Hot Wheels car had to successfully circle it. So West was convinced.

He went to work. Applying his engineering knowledge, he determined that for a standard Hot Wheels car to circle the loop, it must achieve a speed of at least 23 miles per hour. To get that fast, it must be released 351/2 feet above the loop. And in order for it to remain on the track, the optimum angle was 13 degrees. But since the loop was created alongside a wall with the runway reaching up to the third floor inside an office building, he settled on 20 degrees.

And where better to make an engineering marvel than on Ford‘s campus, which is crawling with engineers in the shadow of the automaker’s World Headquarters? With the blessing of his boss, the loop was built about a month ago using 3/4-inch plywood and 91 feet of Hot Wheels track provided by Mattel.

Unveiled during Take Your Child to Work Day, Blade enjoys playing with it whenever he can visit his dad at work. And impressing him is hard enough since Blade is your typical new millennium kid: He is quite familiar with smartphones, iPads, apps and downloads.

“Computer science to him is what Legos was to me,” West said.

The innovative creation has not yet been made an official record by Guinness, but it’s only a matter of time. West, the son of Jim and Cindy West, said he has met all the qualifications and believes his name soon will be added to the books.

In the meantime, the St. Mary Catholic Central High School Class of 2000 graduate and member of the Monroe County Community College Class of 2002 is working toward his engineering degree. It appears he’s well on his way.

And if he’s known around campus as the person who created a world record toy, that’s fine with him.