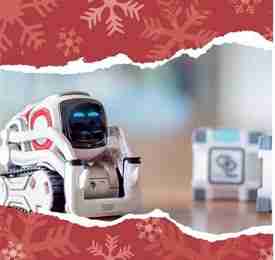 NEW YORK — Looking for a cool tech gift for a special kid in your life? There’s no shortage of fun and fairly educational items these days. New toys for the holidays include little robot friends full of personality and magnetic blocks that snap together to teach the basics of computer programing. Here are some toys designed to keep kids entertained without sacrificing on education:

Tablet screens and apps haven’t gone away, but they’re just not enough on their own. With these toys, kids can create and build with their hands, not just a tablet. — Osmo. As kids arrange magnetic blocks or puzzle pieces, their creations show up on the iPad thanks to a mirror attached to the tablet’s camera. By arranging blocks, for instance, kids put together lines of code to guide an on-screen monster. Another game teaches entrepreneurial and math skills by letting kids run their own pizza shop. The base set costs $30. You then buy addons, such as coding for $50 and the pizza business for $40. It works only with iPads for now.

— Makey Makey. You connect one end to a computer’s USB port and the other to any material that conducts electricity, such as coins or even a banana. Kids can then turn bananas into keyboards and pencil drawings into controls for video games. The basic set costs $25, though for $50, you get additional clips and connector wires. — Meccano sets. This is for the tween or young teen who is handy with a wrench and has a lot of time. Even the trio of smaller Micronoids sets ($40) require a decent amount of time and significant motor skills. The larger models, such as the $140 Meccanoid 2.0, can take the better part of a day to construct. Once assembled, these robots can be programed to dance, play games and interact with each other. — Illumicraft. Don’t let the girly colors or rainbow stickers turn you off. The $20 kit combines science and crafting to introduce basic circuitry. Projects include light-up diaries, jewelry organizers, smartphone speakers and picture frames. — Code This Drone. Software company Tynker and drone maker Parrot have joined forces to create this kit, which includes a drone and a one- year subscription to Tynker’s education service. The kit costs $100 to $150 depending on the drone selected. It teaches the basics of coding through games played with an app- controlled mini drone. Kids can program their own flight plan of flips and turns, or build their own game to send an on-app through an obstacle course, as the real drone mirrors the movements.

Parents with dreams of future high- tech careers are eager for their children to learn computer programming. And some toy makers say it’s never too early to introduce coding concepts, even if a child is still in diapers. — Think & Learn Code-a-Pillar. Kids as young as 3 can “write” code by snapping together a $50 toy caterpillar. Each section signifies a command, such as “go straight” or “play sounds.” Hit the execute button to send the toy crawling in the chosen order. Older kids can program Code- a-Pillar to reach targets placed across a room, or send it through an obstacle course of their own creation.

While the kids aren’t learning a coding language, the toy does try to teach cause and effect, as well as problem solving. — Coji. As its name implies, this $60 mini robot teaches pre-readers to code with emojis. It also reacts when you tilt or shake it, and you can control it with your phone or tablet. — Code & Go Robot Mouse Activity Set. With this $60 toy, kids build a maze with plastic squares and dividers, then program their mouse to make its way through to the cheese at the end.

ROBOTS WITH PERSONALITY Kids want more than robots they can guide with a remote or smartphone. Kids want personality, a little friend to whom they can relate and who recognizes them. — Cozmo. This $180, palm-sized robot is expressive, adorable and fun to play with. A team of animators designed more than 500 reactions for the robot to pick from when it sees someone it recognizes, wins or loses a game, or completes a task. The result is a very cute and human- like buddy — think Pixar’s Wall-E. — CHiP. This $200 robot doggie cuddles, plays fetch and follows you around your house. When he’s close to running out of juice, he even heads over to his charging pad and parks himself. This little guy is very loud when he zips around the room, so apartment-dwellers with hardwood floors might want to invest in a rug.

“Pokemon Go” isn’t the only way kids can play with augmented reality, the blending of the real and virtual worlds. And there are toys that make virtual reality affordable. — Airhogs Connect. With this $150 system, kids use an app to fly an included drone over a sensor pad that, combined with a phone or tablet’s camera, places the drone into the game on the screen. As the physical drone moves, so does the one in the game.