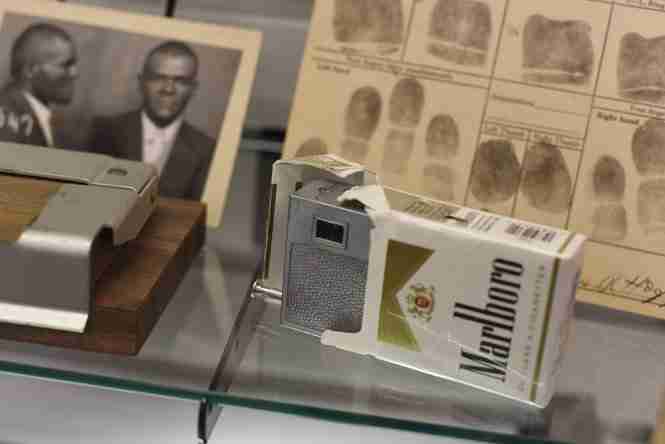 DETROIT (AP) _ A full-size bomb squad suit with a robot from the 1980s, a lie-detector machine from the 1950s and a camera hidden in a pack of Marlboro cigarettes: These are among the treasures kept in the newly opened Detroit Police Museum.

The department’s 150-year history is loaded with historically significant items such as Jimmy Hoffa’s fingerprints and pieces from the automotive industry’s early days. Detroit police veteran Jeff Lemaux, the museum’s curator and general manager, is an expert in the pieces and cheerfully showed visitors the exhibits on a recent Wednesday.

Citizens and young officers can see “all the accomplishments that were made by their predecessors,” said Lemaux, 54. “How many firsts did Detroit do? The first Harley used for police service, the first radio broadcast _ so that they understand that there’s a rich history through the department.”

The museum opened in mid-May, and Lemaux said exhibits are to be rotated and expanded. The museum is open to the public, free of charge, in the Detroit Public Safety Headquarters on Michigan Avenue and Third Street on the western edge of downtown.

Sheryl Zatezalo, 66, of Royal Oak grew up on Detroit’s east side and stopped by the museum on a recent Wednesday after visiting the headquarters to get a fire inspection for the church where she works as a secretary, the Detroit Free Press (http://on.freep.com/1BIQphF ) reported.

“It’s nice to see things like this coming back,” she said, adding that all the city’s museums appear to be getting more visitors than in previous years.

She perused the items on display, stopping near a glass case containing a police officer’s handbook from 1875. Zatezalo said people from the suburbs who want to see the exhibits might not know about them, as they’re on the third floor of the headquarters inside the building.

Lemaux said he hopes that someday the museum could be moved into the former police headquarters at its longtime location of 1300 Beaubien in the Greektown area of downtown. A number of the museum’s pieces came from the building, the police department’s home for most of the 20th Century.

Images range from early booking photos and police academy classes to the zany, with shots of the police clown troupe _ including the drum that was used _ and a motorcycle drill team with 20 men on one motorcycle.

A number of the devices on display such as radios, teletype machines and big, blocky cameras illustrate how much more convenient the 21st Century has made things.

“It’s nice to see how technology has changed,” Zatezalo said.

There are also pieces associated with the Motor City’s motoring history; a working hand-operated traffic sign was used to control the city’s bustling streets in the early days of the automobile. At the time, Lemaux said, police were often seen on motorcycles, as they were able to move nimbly along the streets.

Old revolvers, a Thompson submachine gun replica and even a single-shot shotgun-pistol that fires .410 rounds are on display. The camera in a pack of Marlboros was used in the 1940s or 1950s, “an itty-bitty thing” for its time, Lemaux said.

“That was a really popular surveillance camera during the late `40s and `50s,” he said.

Lemaux has been collecting his own pieces for decades; some of the items in the museum are from his collection as well as from the Detroit police archives and other sources. He’s a former Detroit police officer who retired in 2012 after 27 years.

His father, Max Lemaux, worked as a Detroit police officer for 34 years. His father-in-law Ronald McDonough, his wife’s grandfather and three uncles also worked for the department.