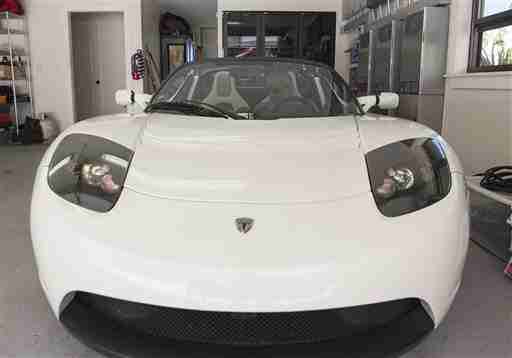 By CALEB JONES
HONOLULU (AP) _ High above the bustling city of Honolulu, in a quiet, exclusive hillside neighborhood where some of the island’s wealthiest residents live, there is an extravagant home that’s not quite like the others.

The 6,000-square-foot house has a view overlooking Diamond Head, Waikiki and the Pacific Ocean, and two Tesla cars in the driveway. It’s not the two electric cars that set the property apart from its swanky neighbors.

The difference is that this solar-powered home is completely energy independent.

Homeowner Henk Rogers, 61, hopes the technology he is using in his home can help make other homes across Hawaii _ and the world _ energy independent as well.

Rogers is famous for discovering the video game “Tetris” more than 20 years ago. He now manages the worldwide rights for the game along with his business partner, Alexey Pajitnov, who wrote the program.

“If you’re going to clean up the world, first of all you have to clean your own room,” Rogers said, referring to Hawaii, which has some of the highest energy costs in the nation.

Rogers will announce his new company, Blue Planet Energy Systems, on Monday. The new venture, which will sell and install battery systems for homes and businesses running on solar technology, plans to begin sales on Aug. 1. He declined to say how much the systems would cost, but said there will be a five- to seven-year return on the investment for a typical project that his company will install.

The Blue Ion system, which Rogers has been testing in his home for the last year, uses Sony lithium iron phosphate batteries, which can last for 20 years and do not require cooling, he says.

Partnering with Sony, Rogers believes the batteries can be a solution to the long-standing problem of storing the sun’s energy and helping lower energy costs in Hawaii.

Sony has been developing lithium ion batteries since 1991, and the units being used in Rogers’ home are top of the line.

The batteries store energy from solar panels, allowing people to use it at night without having to rely on expensive energy from the grid.

Rogers’ company will sell and install the battery systems for commercial and residential use, supplying everything from the housing to the software to monitor and maintain the systems.

Robert Harris, a spokesman for the Alliance for Solar Choice, an advocacy group, said consumers haven’t had much call to invest in battery storage systems because of the cost and incentive programs that encourage people to stay linked to the grid. Harris, who is also the director of public policy at Sunrun, a solar equipment supplier in Honolulu, said homeowners with solar panels typically put energy into the grid and take it back as needed, something called net metering.

“A lot of energy can be put into the grid right now, so it hasn’t been a big incentive necessarily for a homeowner to invest in storage,” Harris said. That could change in the next few months with several new systems besides Rogers’ expected to hit the market.

“These products will be capable of storing and putting out energy on a daily basis at a fairly reasonable price point,” Harris said.

Rogers, who also owns a ranch on Hawaii’s Big Island that is energy independent, said he had an epiphany after suffering a heart attack and near-death experience in 2006.

While recovering, he decided he would take advantage of the second chance. Rogers read about the possibility of losing all the coral reefs in the world because of ocean acidification, which has been linked to climate change and rising carbon in oceans.

“We’re going to end the use of carbon-based fuel, and that is my mission No. 1,” he said.

Rogers is the founder and chairman of the Blue Planet Foundation, an organization that promotes clean energy alternatives and lobbies politicians to change policy.

Recently, the foundation created a book of children’s drawings and letters pleading for state lawmakers to mandate Hawaii become energy independent. He made sure the books were valued at under $25, the maximum amount a lawmaker can receive as a gift, and delivered a copy to every lawmaker in Hawaii.

“This has got to be a message from the children because it’s the children’s world we are trying to save,” Rogers said.

Hawaii Gov. David Ige announced earlier this year that the state of Hawaii would become completely energy independent by 2045.

Hawaii state Sen. Lorraine Inouye, who is on the Energy and Transportation Committee, said she is encouraged that people are taking the initiative to become energy independent.

“I’m so happy that private citizens are trying to have a sustainable power supply on their property,” Inouye said. The plan for energy independence by 2045 “can be accomplished, but we need to remove obstacles,” she added. “If we don’t have anything in statute to accommodate our goals for the future, the private entities, the utility companies, would be able to take things in their hands and do what they want to do.”