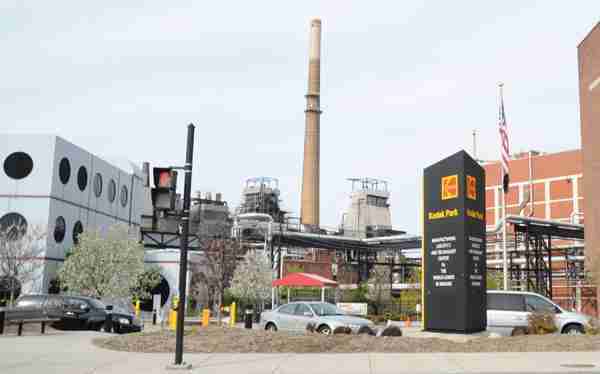 ROCHESTER, N.Y. (AP) _ The chemical know-how and machines that spooled out countless miles of film are being eyed for medical marijuana and solar cells, while the private rail line now carries tomatoes alongside coal as photography pioneer Kodak, its bankruptcy behind it, embraces a new role: startup landlord.

The 127-year-old company had buildings and infrastructure to rival a small city when digital photography bumped its familiar yellow boxes from tourists’ camera bags and took over much of Hollywood.

But rather than selling off its sprawling, 2-square-mile Kodak Park campus, the company has become landlord to 58 diverse companies _ and counting _ that have been courted with the promise of plentiful utilities, its own railroad and unique access to Kodak’s specialty technical and industrial capabilities.

“There’s tremendous value in being able to repurpose the assets that exist here,” said Michael Alt, the retiring director of the renamed Eastman Business Park.

For example, tenant Natcore Technology Inc. can tap Kodak’s film-coating capability in its development of solar cells, and LiDestri Food & Beverage uses Kodak’s short-line railroad, which brings coal to the on-site power plant, to haul the tomatoes it processes into pasta sauces and salsa.

Alt pitches the site’s 125-megawatt power plant _ capacity enough to serve the equivalent of 100,000 homes _ its own water purification plant, waste water treatment facility, fire department and chemical and testing labs as amenities that let startup companies target investment toward their specific needs and get to market more quickly. With the 20-month Chapter 11 bankruptcy nearly two years in its past, companies scared off by Kodak’s uncertain future have found reassurance, he and others said.

“One of the things that appealed to us was that Kodak had roll-to-roll equipment that they used in making photo film that they don’t use any more because of digital cameras,” said David Rutkin, spokesman for Natcore, which is relocating its corporate headquarters from Red Bank, New Jersey, to Rochester. “One of the things on our radar are flexible solar cells … and they would be made using the same equipment.”

New York state has so far committed $100 million to efforts to re-invent the park to a multi-tenant, multi-use site. About half of that funds an environmental trust created last year to clean up and monitor damage to the land and Genesee River from more than a century of film-making. Kodak’s share of the trust is $49 million.

The other state funding has taken the form of tax incentives and grants for the tenant businesses considered crucial to tipping the 1,250-acre site from community liability to asset.

“It was a potential challenge to have such a large footprint in the heart of our community potentially go idle or not be leveraged properly,” said Mark Peterson, a member of the Finger Lakes Regional Council created by Gov. Andrew Cuomo to drive economic development in the area. The council has made the Eastman Business Park its top priority for the past four years.

Saturday, demolition work on some of the older buildings continued with the implosion of Kodak Building 53, turning it into a pile of rubble.

Given Kodak’s decline, the site also offers plentiful skilled labor. All but one of Natcore’s six lab employees had previously worked for Kodak. Among them is research and technology director David Levy, a 20-year Kodak employee who knows of several former research colleagues who, like him, have landed elsewhere on the diversifying site.

“It’s a great thing for all of us,” said Levy who while at Kodak could measure his former employer’s financial troubles over the years by finding it ever easier to park closer to the office.

Kodak in 2014 announced plans to sell the business park but took it off the market in the spring and has now made it a separate division. The decision followed Kodak’s commitment to grow its remaining motion picture and commercial film business, which requires a hefty 4 million square feet of space, Alt said.

At the federal level, Rep. Louise Slaughter has nudged the Department of Defense, Department of Energy and others to take notice. The Eastman Business Park and the Energy Department’s Oak Ridge National Laboratory announced a collaboration last month that will give startup companies access to resources at either facility.

And the work of former Kodak engineers using 35-year-old repurposed equipment contributed, for example, to the development of night-vision goggles like those used during the raid that killed Osama bin Laden, Slaughter said.

“The Defense Department said if they can do that with that kind of equipment, think what they can do if we get them some new things and really make an investment there,” she said.