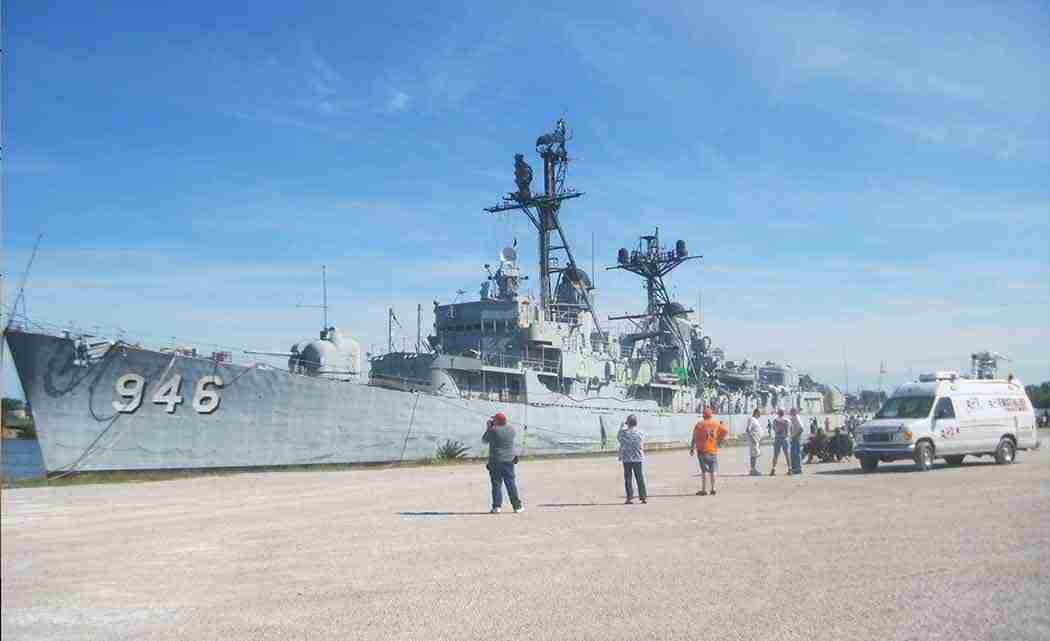 BANGOR TOWNSHIP, Mich. (AP) _ The newest addition to the Saginaw Valley Naval Ship Museum has the capability of giving tours on land and in water, but it’s going to take a lot of time and money to get it up and running.

A 1945 DUKW (pronounced “duck”) boat, one of just more than 21,000 made by General Motors during World War II, was recently acquired by the museum, which also owns the USS Edson Naval Destroyer in Bay County’s Bangor Township. The goal is to teach more history lessons near the boat launch and hopefully make the vehicle seaworthy again.

“It’s going to be a very good addition to the museum,” Mike Kegley, president of the museum, told The Bay City Times ( http://bit.ly/1H6P9Xs ).

But today, it’s a piece of rusted junk.

For the short-term, Kegley hopes to work some volunteers to wash it down and put a fresh coat of paint on it. It’s to be located in the parking lot where the Edson is docked, near the Independence Boat Launch. Those heading to the Edson for a tour can check it before boarding the ship.

Down the road, Kegley hopes to raise money to bring the vehicle back to life.

The vehicle hasn’t operated in at least 40 years, Kegley said, and has essentially rotted away in the woods in Millersburg, a small village in Presque Isle County in Northern Michigan.

A DUKW boat was an amphibious modification of the U.S. Army cargo trucks used to transport goods and troops over land and water, Kegley said. Before the vehicle, he said, troops would bring in supplies and drop the gate off the boat, but all supplies and troops on board would end up wet.

“They needed something that could come out of the water and onto the beach,” Kegley said.

DUKW boats were produced from 1942 to 1945 and were named based on the model naming technology used by GMC. Each letter represented something different:

The vehicle was also designed to allow its driver to easily inflate and deflate tires to make driving on sand easier.

This particular vehicle never saw action in the war, Kegley said. It was placed in storage and purchased by the Kelley family in the 1950s. Court Kelley, who lives in Owosso, finally decided to part with it.

“The family would use it on fishing trips, but it has just been sitting in the woods for the past 40 years,” he said.

The vehicle is currently stored at the Edson site. The museum operates from 10 a.m. to 5 p.m. daily. Ship tours take about an hour and a half. Admission is $10 for adults and $8 for children ages 6-16.