Yale student scientists have designs on the future 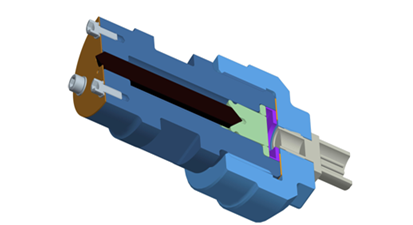 “The goal of the program is to provide teams of undergraduates with research opportunities,” said Nafeesa Kahn, a biomedical engineering major who started work on the chipper with Michael Cruciger, a fellow alumnus, during their senior year.

Their prototype, which is in the design stage, uses a strong spring-loaded device to chip rocks of about a cubic inch in size for an astronaut to use on a trip to a nearby asteroid. They selected their project from a list supplied by the National Aeronautics and Space Administration, and the agency then approved their plan. Once it’s built, they’ll go to Houston to test it out.

“The purpose of doing it in this way is we’d be able to put an encasing around the area that’s being chiseled,” Kahn said.

The pair also were members of the Yale Drop Team, an undergraduate organization of students who conduct zero-gravity research.

“Each year, we’ve been successful in getting one project through that we can work on,” said Cruciger, a molecular biology major. This year’s is part of NASA’s nationwide Micro-g-NExT challenge.

Sharing space at the Becton Engineering and Applied Science Center on Prospect Street are CEID fellows Joyce Guo and Tiwa Lawal, two rising juniors who are concerned with getting health care information to cultures that may not understand it when delivered by a professional.

“Basically, we noticed there were a lot of health disparities” between health care professionals and consumers from minority religious and cultural groups, said Guo, an English and physics major.

During their research, they found that many Hmong women were not getting mammograms because of concerns that males would be involved. On their website, spokenmed.com (which is still under “heavy construction”), information can be shared among people of similar cultures to inform and reassure fellow patients.

“We’re trying to model this off websites like Reddit or Yahoo Answers,” said Guo. “It’s very community-driven and community-based.”

The students are hoping to share information that won’t be found on a traditional site like WebMD. For example, said Lawal, a biomedical engineering and pre-med student, patients at a hospital might want to know that halal food is available, that there are female physicians, translators or that there’s a chapel available.

“We’re hoping to have a read-and-learn page where official collaborators can write articles about knowledge from their field,” Guo said. “We’re also really focused on getting cultural and religious leaders to contribute.”

“We’ve been talking to cultural leaders on the Yale campus and (in) the area,” Lawal said.

Two other 2015 graduates, Tayo Ajayi, an applied math major, and Gordon McCambridge, who studied mechanical engineering, are creating a device that can be used in a variety of ways to send information from the field by text message.

“The idea here is that you have . all the basics of a little computer plus a cellphone,” said McCambridge. It can be hooked up to a photocell to track the amount of light hitting crops on a daily or weekly basis or it can monitor heat and humidity or track shipments, said Ajayi.

“It’s a totally programmable alert system for whatever you want,” said McCambridge. The key is that it’s small, inexpensive and easy to use. “We really focused on the developing world,” he said.

Similar devices can sell “for a few hundred dollars,” Ajayi said. McCambridge added, “Our hope is that we make it for $25, sell it for $50 . and everybody wins.”