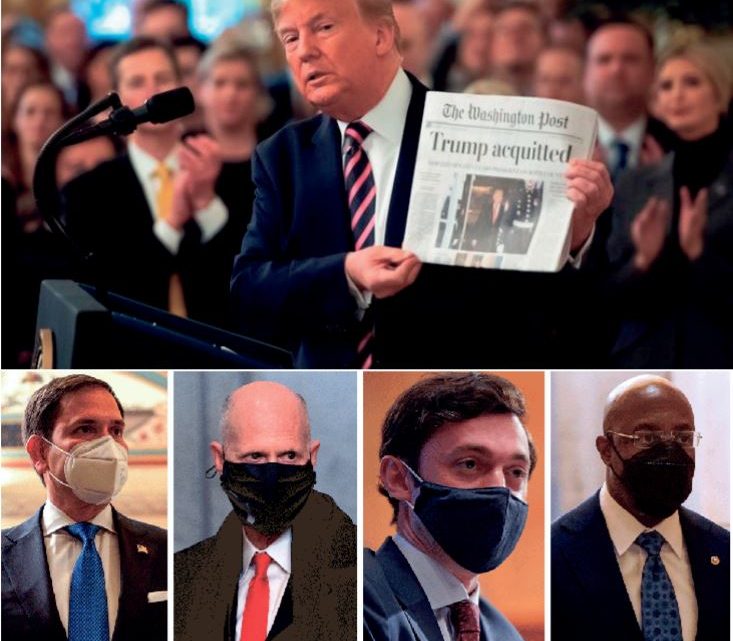 Taken on its face, the Senate’s vote to acquit former president Donald J. Trump of the impeachment charges he faced for fomenting insurrection seems like a threatening anomaly in American history. It is hard to fathom, especially given the riveting evidence provided by the House impeachment managers. Aside from the impactful argumentation, the video they entered into evidence depicting footage of the insurrectionists in the Capitol on January 6, brought into clear view the words, deeds, and more importantly the inspiration for the violence perpetrated that day. Since 1945, the United States has worked to cement its image as the bastion of democracy in the world, but on that day the façade cracked.

For those of us who live, work, and study beneath that façade, however, both the violence of January 6 and the acquittal of Trump for his role in it are unsurprisingly consistent. It was just the latest culmination of the cresting wave of White nationalist ideology that has been churning since the early days of President Barack Obama’s ascendency in 2009, buoyed by birtherism and by the Tea Party Movement, swirling in a sea of White anxiety over demographic shifts, the economic downturn of the Great Recession, and antagonism against the Black Lives Matter Movement. It was this White cultural tumult with which Donald Trump filled his sails and glided into the White House in 2016. While he failed to ride this wind into a second term in office, Trump, aided and abetted by the Republican Party, has set the stage for a new era of White violence like that seen in the years after Emancipation and during Reconstruction in the South. The insurrection of January 6 was the opening salvo and, with no accountability or consequence for the violence, the stage is set for more to come.

Historians of African American history, particularly anti-Black violence, are well-suited to read the tea leaves of the Trump era and the dangers of ignoring White nationalist ideology. Chief among them is Dr. Carol Anderson, chair of the Department of African American Studies at Emory University. In her book in quotes as “White Rage: The Untold Story of America’s Racial Divide,” Anderson threads together the regrettably long history of what is sometimes termed as “whitelash”: backlash by Whites when faced with the advancement of Black people, or other racial minorities. “The truth is,” Anderson writes, “white rage has undermined democracy, warped the Constitution, weakened the nation’s ability to compete economically, squandered billions ofdollars on baseless incarceration, rendered an entire region sick, poor, and woefully undereducated, and left cities nothing less than decimated.”

It is important to remember that the anti-Black violence that Anderson details in White Rage did not only manifest physically, but also in anti-Black policies designed to limit or reverse the gains made by this group. Perhaps the most consistent form of whitelash is disenfranchisement. During the period of Reconstruction, this particular form of White policy violence was exercised through the deployment of literacy tests and poll taxes. Another form, felon disenfranchisement, lasted until deep in the 21st century in Florida, finally undone by Amendment 4 in 2018 after nearly a century on the books. The modern form of whitelash looks like the anti-protest legislation being pushed by Florida Gov. Ron DeSantis, which not only limits the right to protest embedded in the First Amendment, but authorizes vehicular homicide. The proposal is a direct response to the Black Lives Matter protests that swept the nation last year after the murders of Breonna Taylor, Ahmaud Arbery, and George Floyd. Faced with the choice of progressive movement to support social justice, or to double down on racial animosity, Gov. DeSantis chose violence in the form of policy.

At its worst, the failure to impeach Donald Trump means The Big Lie – that the election of President Joseph Biden was fraudulent – will form the basis of the next wave of anti-democratic White nationalist violence to come. International enemies of the US will continue to exploit this, as they already have. The White supremacist element within the armed forces and law enforcement will continue to grow. Unchecked and emboldened, Republican administrations across the nation will do all in their power to stymie and undermine the progressive agenda of the Biden-Harris Administration, and to quash efforts towards social justice. Only focused and determined effort, undergirded by the clarity of purpose born of the painful legacy of racial injustice in the US, will counter the storm to come.