The night Cassius hung with Sam, Jim and Malcolm in Miami 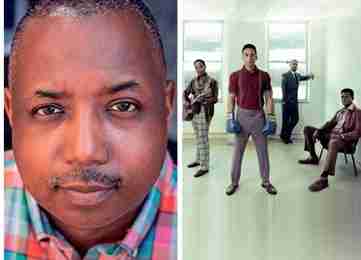 MIAMI – When Kemp Powers was a freshman at Howard University, the arguments he had with classmates were reflective of the internal conflicts he grappled with as a young black man. The “responsibility of an artist to his community,” “the role of religion in life” and more were conversations Powers said he argued about at the Drew Hall dormitory at Howard.

Many of those conversations fueled the dialogue he wrote for actors playing the roles of activist Malcolm X, boxing champ Muhamad Ali, singer Sam Cooke and football icon Jim Brown in his award-winning play, “One Night in Miami…” a musical play about the night of Feb. 25, 1964, when a young Cassius Clay celebrated his victory over Sonny Liston with three of his closest friends – Malcolm, Cooke and Brown. Clay defeated Sonny Liston to become the new world heavyweight boxing champ on Miami Beach.

While crowds of people swarm Miami Beach’s hotspots to celebrate the match, Clay, unable to stay on the island because of Jim Crow-era segregation laws, spends the night at the Hampton House Motel in Miami’s Brownsville community. The play, directed by Carl Cofield, is being staged in Miami for the first time from Oct. 27 through Nov. 11 at the Colony Theatre.

Powers, a history buff and former journalist said, “if you would’ve quizzed me at 19 years old, and asked me who my biggest idols, biggest heroes were, they were Malcolm X, Muhammad Ali, Sam Cook and Jim Brown.”

Powers said he was reading a sports biography on the intersection between the civil rights movement and professional sports and, “There was a little line there that mentioned the night that Cassius Clay beat Sonny Liston, he went back to Malcom’s hotel room with Sam Cooke and Jim Brown at the Hampton House and the next morning he announced that he was in the Nation of Islam.”

While it was no secret that Muhammad Ali and Malcolm X were friends, Powers said he became intrigued by the idea that these “particular four guys were friends.” He started doing research to “figure out how they met and why they were friends. I was reading lots of biographies and basically doing journalistic style research.”

His initial plan was to write a book about the men’s friendship. As he continued digging into research about them, the dearth of information about the night at the Hampton House “kept on frustrating me.”

“There were so few details about what happened in the room, what they talked about. Little details would leak out. Like I knew they were eating vanilla ice cream,” Powers shared during a telephone interview.

Fast forward to his transition from journalism to becoming a playwright, and his attraction to plays that were historical fiction piqued an interest in using the approach to “imagine the kind of conversation held in that room,” he said.

“A lot of it is a based on what I said myself when I was in undergraduate in college. All I did was reverse engineer internal conflict going on in my own mind back to the guy who gave me the idea.”

Using the creative license afforded playwrights, Powers said he put all the researched information he’d accumulated aside and “just tried to explore where I thought they would have been emotionally as young black men and what they would have to say to each other.”

The Miami audience is likely to feel differently about the material because it’s based at the Hampton House, which Powers called “such an important location… where all the black people who were famous went. There are photos there of Martin Luther King there splashing around in the pool.”

“I cared about who these four men were and what they symbolized at that time for very different reasons. A lot of the dialogue you’ll hear in the play, the words coming of the mouths of each of these men – a lot is based on stuff I read about them in interviews.”

The rest, he said, is a mix of his opinions and positions he believed each man likely held.

“When you’re young and you’re militant, you give that to Malcolm X. When you’re brash and you act first and think later you can attribute that to Muhammad Ali. When you’re trying to be business minded, and you’re struggling with a family who comes deep from the church and you’re doing things they don’t approve of, that’s Sam Cooke. When you’re working in an all-white environment and you’re the only black person there, that’s Jim Brown.”

He cautions the audience to go in with an open mind.

“Instead of looking at how they are now,” Powers said he had to be mindful that on the historic night, Clay was 22, Brown was 28, Cook was 30 and Malcolm was 39.