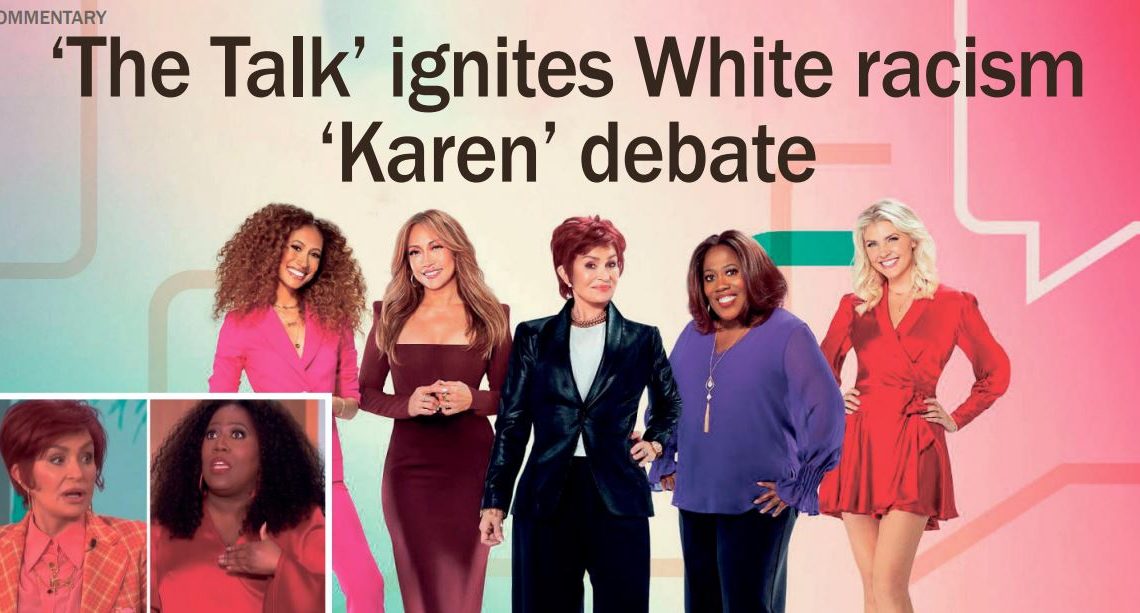 After the Meghan Markle and Prince Harry interview with Oprah Winfrey aired in the United States and United Kingdom, a global discussion ensued around the subject of systemic, generational racism – a discussion that royal loyalists and the White commonwealth want to dismiss, ignore or simply deny exists.

Buckingham Palace issued a statement from Queen Elizabeth supporting an inquiry into the allegations by Meghan Markle, duchess of York, of discrimination and overt racism. Prince William remarked at a press conference that his family is anything but racist. Still the bell of racist allegations hurled at the palace cannot be un-rung, no matter how much mud is thrown at the character of Markle.

In the name of mudslinging, Piers Morgan, who for three years has been an expert slinger of mud at the duchess, did not hold back his disdain regarding the interview. But well into his on-air rant on “Good Morning Britain,” Morgan was confronted on his abject racism by the show’s weatherman, Alex Beresford, and stormed off the set, later quitting in the name of “free speech.”

This is where, across the pond in these United States of America, “The Talk” co-host Sharon Osbourne enters the fray, tweeting in support of her good friend: “@piersmorgan I am with you. I stand by you. People forget that you’re paid for your opinion and that you’re just speaking your truth."

And what exactly is that truth, wondered aloud Osbourne’s “The Talk” co-host Sheryl Underwood. Could that truth be that Morgan is a racist, and his rants against Markle have hidden-inplain-sight racist undertones? Would this not be problematic for Osbourne, who proclaimed that she “is not a racist” and “a friend” of Underwood? These questions were calmly placed on the table during an episode of “The Talk” and hence the reason Osbourne is receiving a tremendous amount of well-deserved backlash.

What propelled the heated exchange into a broader conversation is the reaction of the co-hosts and how White women and Black women inhabit White spaces. It appeared that Underwood was under attack for proposing a rhetorical question: Why do you feel the need to stand by and support what appears to be racism? It is understood that friendship is about a certain amount of loyalty, but in the moment when Beresford pointed out that Morgan’s “opinion,” coupled with years’ worth of micro-aggressive pathology towards Markle, was a clear manifestation of racism, Osbourne’s stance placed her in the same predicament as Morgan: that of being a racist. Or a racist sympathizer. Both problematic in many ways for her Black co-workers and friends.

In her outburst, Osbourne displayed the sense of entitlement that ignited the “Karen” movement, depicted in the day-to-day racist antics of entitled White women and those who affiliate themselves with Whiteness and White privilege, also known as “White freedom.” When White women exercise their “privilege,” it becomes a dangerous situation for Black people. As history has recorded, White women have used their “freedoms” under White Supremacy to participate or be bystanders in deadly atrocities upon the bodies of Black people. Noted are the terrors visited upon Black men. More insidious is the passive aggressive racism against Black woman at the hands of White woman.

It was once thought that White women and Black women were sisters in the struggle for equality, voting and human rights. Yet being simply female does not cement the relationship between White women and Black women. Black women have always worked side by side with White women for various causes. Sojourner Truth, Mary McCloud Bethune, Angelina Weld Grimke, Ida B. Wells-Barnett and Frances Ellen Watkins Harper all worked in the women’s suffrage movement alongside their White counterparts. But this partnership in White spaces had its definite limitations. Black women were many times silenced, ignored and marginalized. Even though Black suffragists worked hard, if not twice as hard, as White suffragists to ratify the 19th Amendment, which restricted states from withholding the right to vote from American women, Black women felt the sting of White women using their privilege to oppress them, and in the end, still could not securely exercise their right to vote until the Voting Rights Act was passed in 1965.

When we take a closer look, we find several documented instances in which White women were confronted about their privilege and their close ties to White Supremacy. White suffragists such as Susan B. Anthony and Carrie Chapman Catt regularly catered to White southerners by excluding Black activists from leadership roles, promoting Jim Crow segregationist thought, forcing Black women to the back of marches, and arrogantly taking on the opinion that Black women should not have the right to vote. This prompted Black suffragist Adella Hunt Logan to tell the “Crisis” magazine in 1915 that “if white American women, with all their natural and acquired advantages, need the ballot, that right protective of all other rights; if Anglo Saxons have been helped by it… how much more do Black Americans, male and female need the strong defense of a vote to help secure them their right to life, liberty and the pursuit of happiness?” Journalist and activist Ida B. WellsBarnett, foreshadowing Underwood, found herself having to confront her “friend” Anthony, on her accommodating and sometimes commiserating behavior towards racist White southerners. Wells-Barnett wrote in her autobiography “Crusade for Justice” that Anthony and other leaders in the suffrage movement “unhesitatingly slandered the entire Negro race in order to gain favor with those who are hanging, shooting and burning Negroes alive." Yet Anthony and Catt were abolitionists and denied being racists, even counted Black men and women among their friends. But this created a toxic environment that made it necessary for Black women to start their own chapters of the National American Woman’s Suffrage Association.

Black and White Women find themselves in a more complex environment post-Civil and Women’s Rights Movements. Working side by side navigating the “glass ceiling” of the corporate world, becoming entrepreneurs, mothers and partners in the same struggle, has oftentimes helped mask perceptible instances of racism. However, it is the underbelly, the invisible current of covert racism that runs through the relationships of Black and White women in majority White spaces, that is toxic. What White women refuse to understand is how their privilege affects Black women adversely. White women, for example, are afforded the privilege to wear any hairstyle of their choosing at their place of employment. Black women do not share that same luxury. Black women are harassed about how they wear their natural hair and face termination. White women can challenge work conditions and human resource issues. Black women cannot without receiving some latent sort of retribution. White women earn 21% more income than their Black counterparts. Black women have fewer avenues of employment to make up that gap reported by Forbes in 2019. This economic inequality has caused friction between White women and Black women.

The freedoms that White women enjoy and the comfortability that they inhabit in White spaces is in direct conflict with Black women. When asked why she decided to publicly to defend a “friend” who has a history of using veiled racist constructs to attack Markle, Sharon cowered behind assertions of not being a racist and then became antagonistic towards Underwood, intimidating even by saying, “Don’t you start crying.” What did Underwood do in that White space, the CBS studio, that warranted such a verbal assault? Why are Black tears threatening? Sheryl was calm, respectful, warm and engaging – the very traits that Black women cultivate and maintain in White spaces for fear of being labeled “angry Black woman.” Sheryl could not directly “call a thing a thing.” She could not, as a co-worker, sharing a White space with Osbourne, insinuate that the latter’s public support of Morgan can be perceived as racist. Being that forward could have very well cost Underwood her job at CBS and her career. Yet Sharon had the privilege to cry and pretend to be an insulted victim.

In the middle of all this chaos, Underwood continued to call Osbourne “my friend.” Is it practical or feasible for Black women to foster friendships with White women? Are White women empathetic and supportive of Black women and their causes? While Black and White women work closely with one another and relationships are forged, as in all friendships, commonality, respect and integrity must be the building blocks. For a friendship between White and Black women to flourish, there must be a fundamental understanding that when racism is the question, acknowledgement is the answer. Not denial. No gaslighting. No secondguessing. To support racism and racist behavior in any way is to align oneself on the side of White supremacy, as Wells-Barnett so poignantly expressed to Anthony more than 150 years ago. Being a Black woman in White spaces can be toxic-free and productive if White women industriously persisted in defeating White supremacy racism instead of endorsing it.

Update: “The Talk” went on hiatus March 15, after CBS opened an investigation into complaints by co-host Elaine Welteroth and her hairstylist, with Welteroth alleging “a racially insensitive and hostile environment.” The network issued this statement on March 16: “CBS is committed to a diverse, inclusive and respectful workplace across all of our productions. We’re also very mindful of the important concerns expressed and discussions taking place regarding events on ‘The Talk.’ This includes a process where all voices are heard, claims are investigated and appropriate action is taken where necessary. The show will extend its production hiatus until next Tuesday as we continue to review these issues.” tdwrites@gmail.com