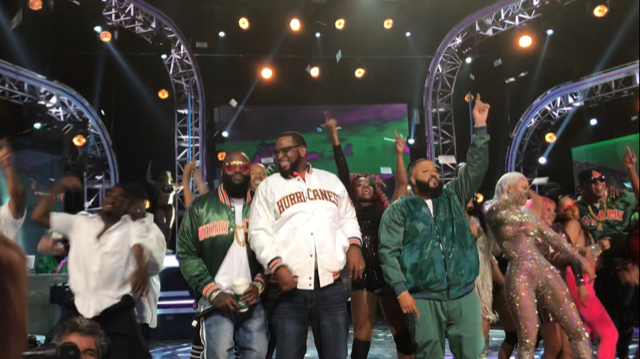 Filmed last Friday for the first time on Miami Beach at the Jackie Gleason Theater, the show featured performances by Yo Gotti, Gucci Mane, Playboi Carti, Migos and the highly anticipated Cardi B.

For the past decade, the awards show has been the most prominent hip-hop celebration on TV. Featuring powerful performances, legendary tributes to iconic honorees and incredible cyphers, artists like Dave East, T-Pain, Waka Flocka, Jim Jones, A$AP Ferg, Plies, Lil Yachty and XXXTentacion, were in attendance.

This year Cardi B took home the Best New Hip-Hop Artist and Hustler of the Year awards, thanks to her hit single “Bodak Yellow (Money Moves).”

The honors are well deserved because for the first time in 19 years this female solo MC sits atop the Billboard charts. Cardi B and her historic single are currently No. 1, making her the first female rapper to top the charts with a solo track since Lauryn Hill’s 1998 “Doo Wop (That Thing).”

Below photo: Benjamin Evans III, co-founder of BMe Community, shares a laugh with chart-topping rapper Cardi B at the 2017 BET Hip Hop Awards. 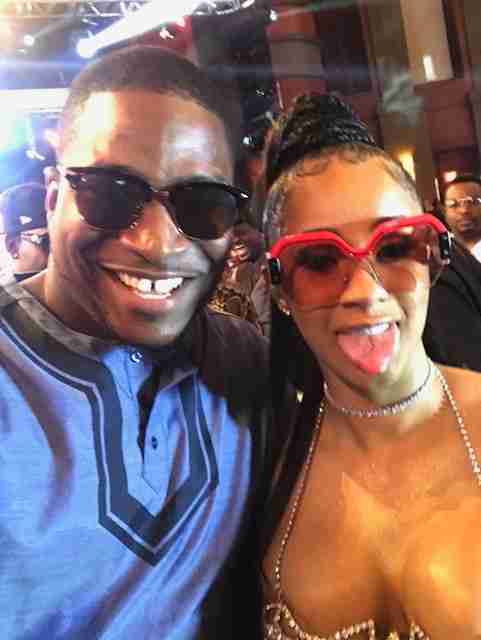 During her acceptance speech, she thanked her fans, her family, her label Atlantic and Offset for supporting her.

“A lot of people wanted to sign me but they were willing to write them checks,” said Cardi B.

For the past two years the rags to riches rap star has hustled her way to the top.

Miami legend Luther “Uncle Luke” Campbell also received the “I am Hip Hop” icon award. Campbell is one of the pioneers of the Miami Bass sound and is regarded as the “Godfather of Southern Hip-Hop.”

“In 35 years no one ever honored me for nothing,” said Campbell who recalled never receiving the national recognition he deserved for changing the game of the hip-hop industry. “I’m thankful for BET and this recognition.”

Campbell – an artist, activist, author, businessman and radio host – made history as the first in the music industry to provide “parental advisory” stickers on products, responsibly ensuring his music was bought by those of a certain age.

As a member of the 2 Live Crew, Campbell fought to ensure the freedom of speech all the way to the Supreme Court – and won.

Though he hadn’t received much recognition in the hip-hop industry, in 2000, The Rock and Roll Hall of Fame honored Campbell’s contribution to hip-hop with its “Hip-Hop Nation: Roots, Rhymes and Rage” exhibit. In 2004, Campbell won the very first Free Speech Coalition “Celebrity Freedom Fighter Award” for his free speech fight.

“When you think of me, think of business and family first,” said Campbell who spoke of his success in the industry. “With my first check, I bought my momma a house, with my second check I invested in my youth program … then I spent all my money on fighting so that you can have the right to say whatever you wanted on your record.”

His endless philanthropic efforts include giving to refugees from Cuba and Haiti and those less fortunate than himself in the community.

Campbell is also the owner of several Wingstop franchises and has influenced the likes of Rick Ross and DJ Khaled to invest in businesses in their community.

“I am where I am today because of Uncle Luke,” said DJ Khaled who spoke about being on underground radio and Campbell giving him his big break. “He showed me everything I know.” 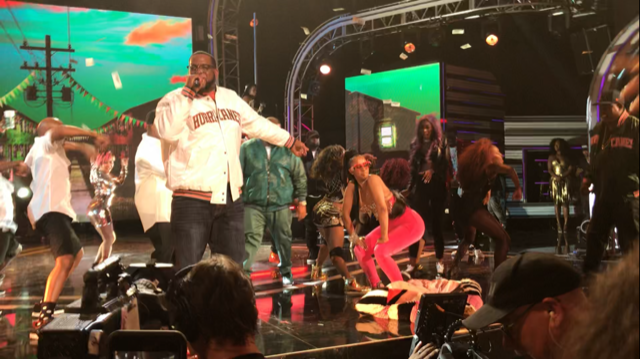 Uncle Luke performs while rapper Cardi B. and others dance to the Miami Bass sound he helped create.

Campbell is currently in the process of producing a biopic on his life with Lionsgate as well as several other television projects.

While in town, the awards show also brought attention to the relief efforts for those in Florida and the Caribbean who were hit hard by Hurricane Irma. BET Networks and Jesse Collins Entertainment teamed up with Miami-based non-profit Make the Homeless Smile (MTHS) on hurricane relief efforts.

“I was so excited to hear that a major network wanted to partner with my local organization,” said Valencia Gunder, founder of Make the Homeless Smile. “Your network is your net worth. Had it not been for people who believed in my work, this opportunity would have never been made possible … I’m so thankful for friends like Felecia Hatcher.”

Hatcher set up the connection between BET and MTHS. Volunteers from BET served those in need, donated items and raised funds throughout the awards show.