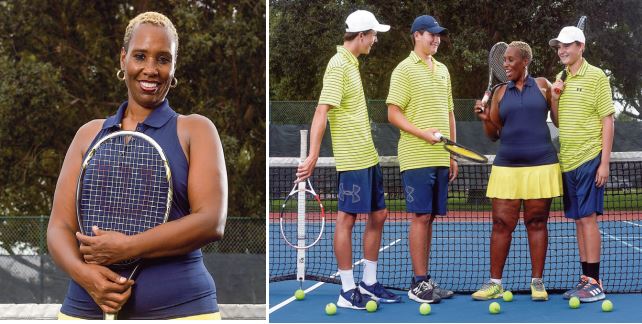 Delray Beach, Fla. – Sheila Townsend of Delray Beach not only is a history making tennis coach but a proliﬁc swimmer, former lifeguard and mother of two tennis players, one a pro and another might have been but not for an injury.

Along the way Townsend transcended racism as a historically black college (HBCU) tennis player to get where she is today.

Ironically her daughter Taylor Townsend, who won junior Grand Slams on the way to her professional career, also has endured racism to climb the ladder in the predominantly White world of tennis.

But to look at Sheila Townsend’s beaming smile, one would never know she’d been through a transformation and had to reinvent herself to emerge the success she is today.

Townsend made history as the ﬁrst and only African American female high school tennis coach in Florida to take her team to the state championships. Her team at Boca Raton High School is comprised of all Caucasian males – yet another anomaly.

But smart, athletic, curious and driven Townsend, from Chicago, always seemed destined for greatness, say her friends and family.

She ﬁrst hit the tennis courts as a child, forced to tag along with her own mother, who enjoyed the sport as a casual pastime.

Townsend eventually realized she was pretty good at tennis when the older neighborhood players would beg her to join them.

Her aunt Harriette Moody said Sheila was a proliﬁc swimmer too, becoming a lifeguard before making her mark in tennis.

Townsend would later secure a full tennis scholarship at Lincoln University, an HBCU in Missouri, crediting a longtime player in Chicago named Edgar Davis who recommended she apply for the scholarship.

Once at Lincoln, their all-Black team – the only Black team in the conference, confronted racism.

“They (White players) would be surprised to see that we were all Black,” Townsend recalled. “You could tell they had a sense of arrogance … like, ‘How dare they be here?’ They wouldn’t shake our hands. We came to expect them to not have sportsmanship towards us. But the best way to get them back was to beat them as bad as we could.”

Townsend and her former husband would produce tennis tycoons of their own. They even moved the family from Chicago to Georgia when daughters Symone and Taylor’s noted coach Donald Young moved there. His tennis pro son, Donald Young, Jr. was ranked No. 1 in the world in 2005.

The Townsends divorced, and Sheila eventually moved to Florida when then-teenaged Taylor was being groomed through the United States Tennis Association (USTA) National Training Program in Boca Raton.

“Sheila reinvented herself,” said her longtime friend Michele Tolbert Ploss of Chicago. “That transition was good for her.”

Chandra Noble, a doctor of Biblical Counseling and resident assistant for the USTA program, took care of Taylor and the other young players in the dormitories. Taylor had moved to Florida ahead of her mother, and Noble and she were the only two African Americans as part of the world renowned program, sharing a bond.

“I was caring for Taylor before Sheila moved to Florida,” said Noble, who also plays and enjoys the sport. “As a mom, what I admired so much about Sheila was her morals, values, and principles. She was concerned about every aspect of Taylor’s life. Not just tennis. That’s why we connected.”

Taylor would triumph winning junior Grand Slams at the Wimbledon and Australian Opens. Her sister Symone was just as skilled, but suffered an injury that kept her from a potential professional career.

Tolbert Ploss said Townsend is the complete package. “If I let her put a tennis racket in my hand, she’d probably take me to state too! She’s really a great spirit and knows how to deal with adversity and that makes her a great coach.”

Sheila’s aunt Harriette, her mother’s sister, says she is second to none.

“She feeds the homeless and takes them dinner and asks about their day. I’m not surprised. She comes from a big loving family. We’re so proud of her.”

Next post Inside a KKK murder plot: ‘Grab him, take him to the river’