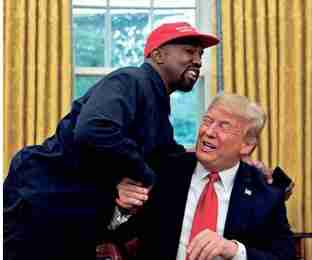 WASHINGTON (AP) – President Donald Trump told young black conservatives Friday that his approval ratings among black voters shot up after Kanye West’s recent visit to the White House, saying the rapper”may be the most powerful man in all of politics.”

The president played host at an East Room”summit” of black young adults that felt more like a political rally, with many of those in attendance wearing”Make America Great Again” hats and chanting”We want Trump! We want Trump!”

Ten days before the midterm elections, Trump listed ways his administration was working to make life better for African Americans. He recalled with nostalgia how, when he was running for president, he asked black voters to support him because”What the hell do you have to lose?”

He repeated his claim that black communities have gotten”nothing” from Democrats, and said they were”nervous” about the midterms.

“For decades, policies advanced by Democrats have eliminated opportunity and wiped out good paying jobs and even great paying jobs for the black community, you know that,” Trump said.

“Think of it. Their policies are absolutely adverse to the black community.’ Trump said the unemployment rate for African Americans had fallen to the lowest level in history under his watch. Government statistics show that it has fallen to single digits from a high of more than 21 percent in early 1983, but it’s still nearly double the overall national unemployment rate.