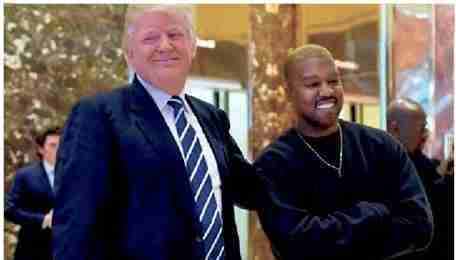 PHOTO COURTESY OF CONSEQUENCE OF SOUND

PHILADELPHIA – It’s one of President Donald Trump’s favorite talking points in promoting his administration’s success: the record low rate of black unemployment. But on a recent sunny afternoon in Vernon Park in Philadelphia’s Germantown neighborhood, that victory seemed hollow.

When asked what he makes of Trump’s claim that black Americans are faring better under his administration, construction company owner and Germantown resident Carlton Washington replied, “Where at? Calabasas?”

The retort was a reference to controversial rapper Kanye West, who had lunch with Trump at the White House on Thursday afternoon. Over roasted chicken, fingerling potatoes and sauteed asparagus, the two discussed crime in Chicago, more possible presidential pardons, job creation and the black unemployment rate.

According to the Bureau of Labor Statistics, the unemployment rate for black Americans in September was 6 percent.

That’s down from a high of 21.2 percent in January 1983, but is still nearly double the overall national unemployment rate of 3.7 percent. The unemployment rate belies the on-the-ground reality for many African Americans, according to experts.

“The rates are improving. There’s a question of whether his policies created that improvement,” said Andre Perry of the Brookings Institution, whose research focuses on black communities. “My question is: What kind of jobs are people working in?”

While black employment may have improved, that hasn’t translated into broader economic gains.

That’s partly because African-Americans are still disproportionately toiling in lower-quality jobs. Black people make up roughly one-fifth of those working in temporary jobs, a figure that hasn’t changed much in the past five years, even as the economy has improved. Just 12 percent of all Americans are black.

And last year, Trump’s first in office, the income gap between whites and blacks widened slightly. The typical AfricanAmerican household earned $40,258, down 0.2 percent from a year earlier, while white households saw an income gain of 2.6 percent, to $68,145.

The racial wealth gap has also worsened even as unemployment rates have come down. The median net worth of a white household was 10 times that of a black household in 2016, the latest data available.

“What does full employment mean to a black man in Baltimore? To youth in Chicago?” Perry said. “What are you doing to bring opportunities to black neighborhoods, to create wealth? I don’t see those signs of the economy.”

Philadelphia City Councilwoman Cindy Bass, whose district includes Germantown, remembers shopping with her family as a child along the neighborhood’s then-main economic corridor, where residents could buy food, get their hair done and find a pair of sneakers or a new outfit all within a few blocks during the 1970s and 1980s.

The area is much different today, with less activity and fewer businesses and the jobs that came with them.

“I don’t know what he’s claiming credit for,” said Bass, looking toward Germantown and Chelten avenues. “His numbers are fake news, as far as I’m concerned.” Bass said Trump’s continued assertion that black America is recovering is an insult.

“People are struggling, and to not give any sort of recognition of that, and to say that everything’s OK, everybody’s working, everybody’s doing well, is just not true. When you look at our communities, you see something completely different. When was the last time he’s been to any neighborhood that is even similar to a Germantown?”

In Germantown, a neighborhood that is 80 percent black, the median income is $28,046, less than half the national average, according to the census. The poverty rate is 34 percent, nearly three times the national rate of 12.7 percent. More than 20 percent of residents make less than $10,000, and 60 percent of families live on less than $50,000.

That number obscures those who have dropped out of the labor market, who are doing cash-only jobs or who have gone underground.