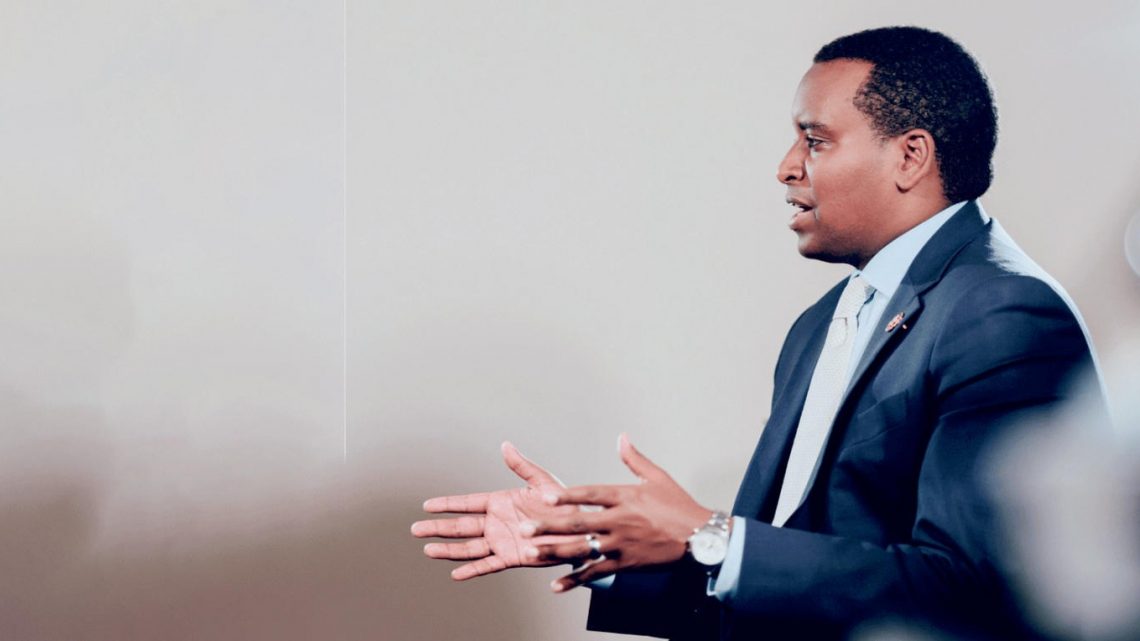 WASHINGTON (AP) — Donald Trump’s historic second impeachment trial opened Tuesday in the Senate with graphic video of the deadly Jan. 6 attack on Congress and the defeated former president whipping up a rally crowd — “We’re going to walk down to the Capitol!” — as he encouraged a futile ﬁght over his presidency.

The lead House prosecutor told senators the case would present “cold, hard facts” against Trump, who is charged with inciting the siege of the Capitol to overturn the election he lost to Democrat Joe Biden. Senators sitting as jurors, many who themselves fled for safety that day, watched the jarring video of the chaotic scene, rioters pushing past police to storm the halls, Trump flags waving.

“That’s a high crime and misdemeanor,” said Rep. Jamie Raskin, DMd., in opening remarks. “If that’s not an impeachable offense, then there’s no such thing.”

IMPEACHMENT, FROM 1A Trump is the ﬁrst president to face impeachment charges after leaving ofﬁce and the ﬁrst to be twice impeached . The Capitol siege stunned the world as rioters ransacked the building to try to stop the certiﬁcation of Biden’s victory, a domestic attack on the nation’s seat of government unlike any in its history. Five people died.

Acquittal is likely, but the trial will test the nation’s attitude toward his brand of presidential power, the Democrats’ resolve in pursuing him, and the loyalty of Trump’s Republican allies defending him.

Trump’s lawyers are insisting that he is not guilty of the sole charge of “incitement of insurrection,” his ﬁery words just a ﬁgure of speech as he encouraged a rally crowd to “ﬁght like hell” for his presidency. But prosecutors say he “has no good defense” and they promise new evidence.

Security remained extremely tight at the Capitol, a changed place after the attack, fenced off with razor wire and armed National Guard troops on patrol. The nine House managers walked across the shuttered building to prosecute the case before the Senate.

White House press secretary Jen Psaki said Tuesday that Biden would not be watching the trial of his predecessor.

“Joe Biden is the president, he’s not a pundit, he’s not going to opine on back-and-forth arguments,” she said. With senators gathered as the court of impeachment, sworn to deliver “impartial justice,” the trial was starting with debate and a vote over whether it’s constitutionally permissible to prosecute Trump after he is no longer in the White House.

Trump’s defense team has focused on the question of constitutionality, which could resonate with Republicans eager to acquit Trump without being seen as condoning his behavior.

But the House prosecutors argued there is no “January exception” for a president on his way out the door. Rep. Joe Neguse, D-Colo., referred to the corruption case of William Belk-nap, a war secretary in the Grant administration, who was impeached, tried and ultimately acquitted by the Senate after leaving ofﬁce.

“President Trump was not impeached for run of the mill corruption, misconduct. He was impeached for inciting a violent insurrection – an insurrection where people died, in this building,” Neguse said.“If Congress stands by, it would invite future presidents to use their power without any fear of accountability.”

It appears unlikely that the House prosecutors will call witnesses, in part because the senators were witnesses themselves. At his Mar-a-Lago club in Florida, Trump has declined a request to testify.

Trump’s defense team has said it plans to counter with its own cache of videos of Democratic politicians making ﬁery speeches. “We have some videos up our sleeve,” senior Trump adviser Jason Miller said on a podcast Monday.

“In trying to make sense of a second Trump trial, the public should keep in mind that Donald Trump was the ﬁrst president ever to refuse to accept his defeat,” said Timothy Naftali, a clinical associate professor at New York University and an expert on impeachment.

“This trial is one way of having that difﬁcult national conversation about the difference between dissent and insurrection,” Naftali said.

A ﬁrst test Tuesday will be on a vote on the constitutionality of the trial, signaling attitudes in the Senate. The chamber is divided 50-50 between Democrats and Republicans, with a two-thirds vote, 67 senators, re quired for conviction.

A similar question was posed late last month, when Sen. Rand Paul of Kentucky forced a vote to set aside the trial because Trump was no longer in ofﬁce. At that time, 45 Republicans voted in favor of Paul’s measure. Just ﬁve Republicans joined with Democrats to pursue the trial: Mitt Romney of Utah, Ben Sasse of Nebraska, Susan Collins of Maine, Lisa Murkowski of Alaska and Pat Toomey of Pennsylvania

Presidential impeachment trials have been conducted only three times before, leading to acquittals for Andrew Johnson, Bill Clinton and then Trump last year.

Previous post Where ignorance is bliss, ’tis folly not to be wise