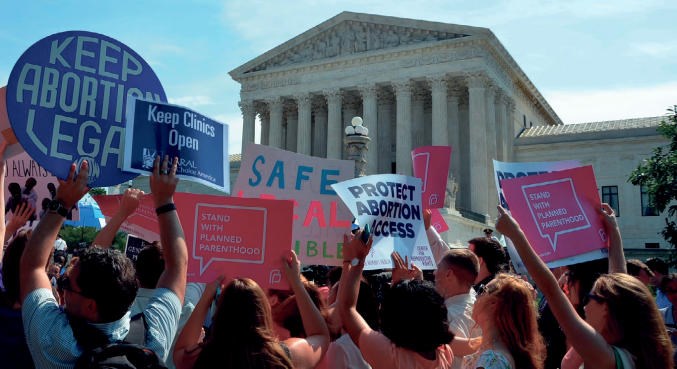 This week the U.S. Supreme Court heard oral arguments surrounding the controversial Texas abortion law, SB 8, also known as the six-week abortion ban, which deputizes Texas private citizens to sue anyone who performs an abortion after an embryo cardiac rhythm has been detected and established in a pregnant woman. Around the six-week gestational point is where a fetal heartbeat can be discerned. SB 8 also implicates any person or entity that “aids or abets” a woman seeking to terminate a pregnancy at six weeks gestation. Most women discover that they are pregnant after six weeks gestation has taken place and before 80% – 90% of abortion procedures occur. The law makes no provisions or exceptions in the case of rape or incest. A private citizen could win a lawsuit totaling $10,000 if they successfully sue an abortion provider or person(s) who intentionally assist a pregnant woman obtain an abortion, or unintentionally assist. A driver for a ride hailing service has the potential to be liable for dropping a passenger off at an address that is the establishment of an abortion provider. Lyft and Uber have announced that they will “fully cover” the legal expenses for any driver who is sued.

Since this law was enacted in early September, the impact on abortion providers has been swift. The number of abortion providers in the state of Texas has dropped by 60% and experts say that abor tion Whole Women’s Health Clinics, an organization that provides abortion and gynecological services all over the country, saw a 70% drop in the number of abortions it performed over the past couple of months in Texas. In 2013, Texas passed a law that required abortion clinicians to have admitting privileges at a hospital at least 30 miles away which proved to be challenging at the time. Of the 42 surgical abortion clinics operating in Texas, more than half had closed when the law was overturned in 2016. The 19 that remain open are struggling. Other options are being more utilized such as abortion inducing medications by mail or traveling out of state. Women are traveling to Louisiana and Oklahoma seeking abortion services, sometimes completing a 12hour drive from Texas to neighboring states, which means longer wait times at these out-ofstate clinics. Marva Sandler, director of Whole Women’s Health Clinics in Texas revealed that the clinics have been “teeter-tottering between financial risk, legal risk and staffing risk” since the law took effect. Clinics are losing staff members and patient visits have plummeted. Abortion rights advocates say that the new restrictive abortion law in Texas is the “blueprint” for other Republican states to follow to get around Roe v Wade and virtually eliminate legal abortions. “Lawmakers from across the country were watching the Texas bill very closely… and when the Supreme Court allowed this unconstitutional ban to go into effect, they said, ‘now’s our chance,” Elizabeth Nash, Texas policy analyst at the Guttmacher Institute, a reproductive rights organization, stated in response to the passing of SB 8.

However, the U.S. Supreme Court is not hearing arguments to overturn Texas’ restrictive and controversial abortion ban law. The justices are being asked to decide if its lawful for the Biden administration and abortion providers to pursue a federal challenge against the state of Texas regarding SB 8. According to SB 8, authorities are not ofﬁcially overstepping Roe v Wade by arresting and prosecuting abortion clinicians and clinic staff for providing abortion services. SB 8 has in fact deputized the average citizen in the state of Texas and given these citizens the authority to restrict abortions by granting the capability of monetary relief through ﬁling lawsuits against the entity that provides that service. The state of Texas argues that the Biden administration and abortion providers do not have a solid case against Texas because, technically, Texas is not restricting a women’s right to have an abortion. Several Supreme Court justices appeared to agree with Texas counsel Monday that the Justice Department’s lawsuit was overreaching in scope and “broad as can be” as noted by Chief Justice John Roberts. During the three-hour hearing, Solicitor Gen. Elizabeth Prelogar argued that the “uniqueness” of SB 8 “is so unprecedented, extraordinary and extraordinarily dangerous for our constitutional structure” because if a state can without exception deputize citizens who can sue other citizens regarding their rights under the law “then no constitutional right is safe. No constitutional decision from this court is safe. That would be an intolerable state of affairs." Prelogar further expressed to the justices that Texas’ abortion law “clearly violates this court’s precedents,” a deliberate rebellion against the Supreme Court’s previous rulings on abortion, an “open deﬁance.”

While the justices were not clearly impressed or convinced with the Biden administration argument to pursue a federal challenge against Texas, they appeared to lean towards abortion providers pursuing a case against SB 8 and the state of Texas and had several probing questions about the constitutionality of the abortion ban law and how it affects the court’s rulings on abortion. Justices Brett Kavanaugh and Amy Coney Barrett expressed concern that allowing the Texas law to continue would seemingly grant other states permission to follow with laws that would encroach upon the constitutional rights of citizens by using private parties to do the dirty work of the state by ﬁling lawsuits, in effect getting around the law, and leaving the state free of penalty and responsibility. “There’s a loophole that’s been exploited here or used here,” Kavanaugh said. “It could be free speech rights. It could be free-exercise-of-religion rights. It could be Second Amendment rights.” Barrett, on the other hand, opined that the Texas law prevents abortion providers from initiating a full and complete defense that could include the constitutionality of abortion itself considering the possibility of clinicians accruing monetary judgments due to successful lawsuits ﬁled against them. In essence, it turns the abortion provider or facility into “a permanent defendant” because there can be “limitless lawsuits ﬁled in any Texas county over a single abortion.” Not only that, if the law is not struck down by the Supreme Court, judgments against abortion providers and clinics could be “millions and millions of dollars” retroactively. The threat of ﬁnancial liability, which in turn diminishes business and abortion services, is the intention of SB 8. “I’m wondering if, in the defensive posture in state court, the constitutional defense can be fully aired,” Barrett said.

Justices were also quick to note that the Texas law has a “chilling effect” that can be felt across the country and more principally women who reside in the state. Justice Elena Kagan stated that SB 8 prevents "every woman in Texas from exercising a constitutional right as declared by this court." Kagan concluded that "in these chilling effect cases we’re kind of guessing, ‘Well, this would sort of chill me,’" she said. "Here, we’re not guessing. We know exactly what has happened as a result of this law. It has chilled everybody on the ground." A study published by the University of Texas concurs with the “chilling effect” SB 8 has had in Texas by acknowledging that “the number of abortions statewide fell by 50% after the law took effect in September, compared to the same month in 2020.” Yet the most chilling effect of all that women’s rights activists point out about the Texas law is the fate of those women who suffer health and racial disparities, who are not able to afford to travel to a neighboring state to gain access to abortion services, which tragically shifts the narrative to a pre-Roe v Wade era where women opted for more primitive and dangerous methods to obtain an abortion.

The U.S. Supreme Court will likely rule on this landmark case in the summer of 2022. The Biden administration made a weighty statement while arguing before the justices by pointing out that there has never been a state that "has ever sought to challenge the supremacy of federal law and keep the courts out of the equation in quite the same way.” The precedent that could be created by allowing SB 8 to stand would have clear-cut monumental effects across the country. Justice Elena Kagan surmised that if the court were to side with Texas, "essentially we would be inviting states, all 50 of them, with respect to their unpreferred constitutional rights, to try to nullify the law that this court has laid down."