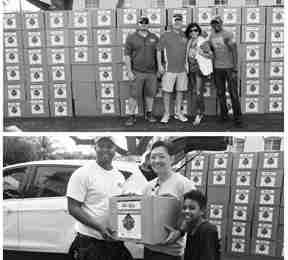 Stellar Tokar, Vice President of the MISSION UNITED advisory council helped put the event together to assist with the transition from military lifestyle to civilian life.

“Sometimes, getting out of the military is not so easy,” said Stella Tokar. “There’s a huge support system and structure within the military, but there isn’t that level of intensity when you transition back to civilian life.

That’s why this is a very special day so we can help these veterans during the holiday season.”

Each box distributed was valued at $65 and to serve four people. The boxes each included all of the necessary canned and packaged foods and trimmings for a Thanksgiving dinner. Each box also contained a $20 Publix gift card so veterans could purchase their protein of choice.

“For me, this is important because I get to give back to my brothers and sisters, as I am a veteran myself,” said Ryan Bancroft, engagement manager at MISSION UNITED. “I don’t think there’s any better way to say thank you than to help our military veterans during Thanksgiving with these meals.”

The boxes were distributed to veterans “drive thru” style at United Way of Broward County’s parking lot and included items such as cranberry sauce, mashed potatoes, stuffing, green beans, corn bread mix and a pie crust. More than 40 volunteers from The Bridge Church came out to help distribute the boxes.

Next post Wrapping up the holidays in an environmentally sustainable way

Previous post The Urban launches ‘Welcome to the Afrofuture,’ in Overtown