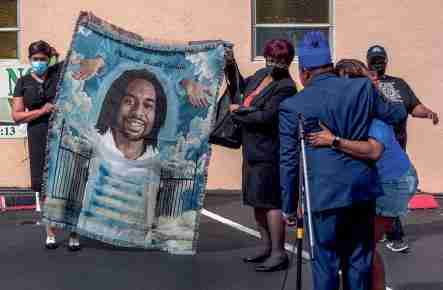 Rivera Beach, Fla. – Families of those recently killed by police joined in a rare, history-making event Sunday under the leadership of Bishop Thomas Masters, founder and pastor of New Macedonia Missionary Baptist Church in Riviera Beach. The popular pastor, a 12-term former mayor of Riviera Beach, brought together the families of slain members of the Black Lives Matter movement such as Corey Jones, Ahmaud Arbery, Philando Castile, Tinoris Williams, Brian Quinones and others, including Central Park Five member Dr. Yusef Salaam, for the unveiling of a Black Lives Matter mural in the parking lot of the church. It is the ﬁrst mural of its kind in a church parking lot in Palm Beach County and quite possibly the ﬁrst in the state.

The unveiling ceremony, which also took place on the ﬁfth anniversary of church drummer Corey Jones’ untimely death, was at times emotional, joyous and celebratory with a look back through history and a look to the future. Bishop Masters also unveiled red parking space curbstones with the names of history makers from the past such as Martin Luther King, Jr. and Medgar Evers to modern day men and women such as Ahmaud Arbery, Trayvon Martin, George Floyd, Breonna Taylor, and Jones, among others.

The curbstones are in red signifying blood shed as they lost their lives. Local funeral homes pitched in by presenting beautiful blankets to the families featuring oversized pictures of their loved ones.

“People came together Sunday under one banner and that was Black Lives Matter, “said Bishop Masters, who is currently the international ambassador for the World Conference of Mayors.

He said he was pleased that so many felt it was an important statement. “It’s time to move from pain to gain. It’s time for healing in our nation, and that’s why it’s so great that on this occasion, families of slain loved ones came together with elected ofﬁcials, clergy, funeral homes, and even a member of the Central Park Five, Dr. Yusef Salaam. I’m pleased at what we experienced here. But this was only the beginning. Maybe now other churches will take the mantle, and even paint murals in their own parking lots.

This is a history lesson.”

A poignant moment came in the program when the mother of Ahmaud Arbery attempted to speak. Wanda Cooper-Jones broke down in tears as the curbstone bearing her son’s name was unveiled. Arbery was executed in February while jogging in a white neighborhood in South Georgia. Cooper-Jones struggled to get her words out. “Today is Sunday. I have a hard time on Sundays because Ahmaud was killed on a Sunday,” she said through tears. Bishop Masters began to lead the audience in hymns to console her. Later she knelt and posed with well-wishers at the curbstone bearing her son’s name.

Dr. Yusef Salaam, one of the Central Park Five, now known as the ‘Exonerated Five,’ said Blacks have always known oppression but he still has hope. He and the other four teens were jailed for the brutal sexual assault of a white woman in Central Park in 1989. He was exonerated and freed after seven years behind bars. “We’ve always had a front row seat to oppression, but this event speaks to the young people that Black Lives do Matter.”

Sheila Banks, aunt of Corey Jones, said she brought all the families together for the occasion because such support helped her tremendously when her nephew was slain in 2015. She credits Vickie Williams, mother of Tinoris Williams, who was killed by a deputy in 2014, with helping her family get involved with families who have experienced similar loss.