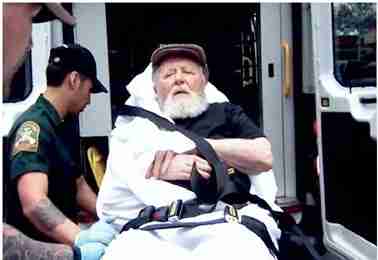 BERLIN (AP) — A 95-year-old former Nazi concentration camp guard who lived quietly in New York City for decades was carried out of his home on a stretcher by federal agents and flown to Germany early Tuesday in what could prove to be the last U.S. deportation of a World War II-era warcrimes suspect.

Jakiw Palij’s expulsion, at President Donald Trump’s urging, came 25 years after investigators first accused Palij of lying about his wartime past to get into the U.S. But it was largely symbolic because officials in Germany have repeatedly said there is insufficient evidence to prosecute him.

Trump “made it very clear” he wanted Palij out of the country, and a new German government that took office in March brought “new energy” to expediting the matter, U.S. Ambassador Richard Grenell said.

Eli Rosenbaum, the former head of the U.S. office investigating accused Nazi war criminals, said Palij’s removal “is a landmark victory in the U.S. government’s decades-long quest to achieve a measure of justice and accountability on behalf of the victims of Nazi inhumanity.”

Palij lived quietly in the U.S. for years, as a draftsman and then as a retiree, until nearly three decades ago when investigators found his name on an old Nazi roster and a fellow former guard spilled the secret that he was “living somewhere in America.”

Palij, an ethnic Ukrainian born in a part of Poland that is now Ukraine, said on his 1957 naturalization petition that he had Ukrainian citizenship. When their investigators showed up at his door in 1993, he said: “I would never have received my visa if I told the truth. Everyone lied.”

A judge stripped Palij’s U.S. citizenship in 2003 for “participation in acts against Jewish civilians” while he was an armed guard at the Trawniki camp in Nazi-occupied Poland and he was ordered deported a year later.

But because Germany, Poland, Ukraine and other countries refused to take him, he continued living in limbo in the twostory, red brick home in Queens he shared with his late wife, Maria. His continued presence there outraged the Jewish community, attracting frequent protests over the years that featured such chants as, “Your neighbor is a Nazi!”

According to the Justice Department, Palij served at Trawniki in 1943, the same year 6,000 prisoners in the camps and tens of thousands of other prisoners held in occupied Poland were rounded up and slaughtered. Palij has acknowledged serving in Trawniki but denied any involvement in war crimes.